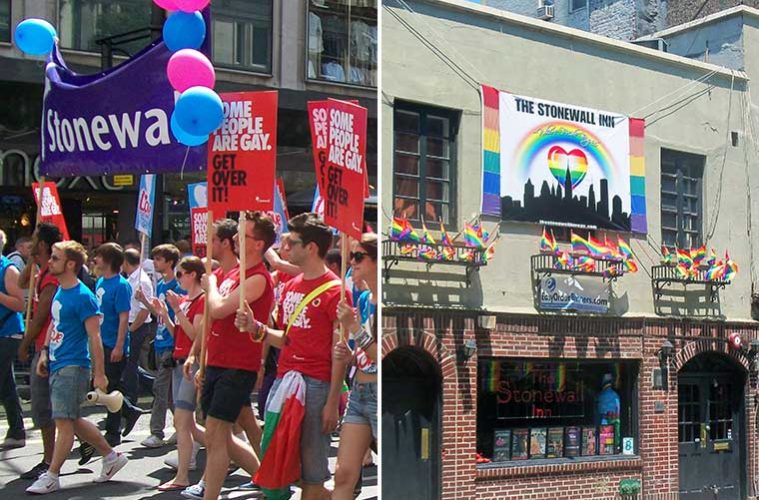 Every June, the LGBTQ (Lesbian, gay, bisexual, transgender, questioning or queer) community commemorates the 1969 Stonewall Riots as a marker for the start of Pride celebrations.

If you ever wondered what Pride is about or wanted a few pointers on Pride history, this is the perfect thread for you. Happy #PrideMonth everyone! https://t.co/1khRAbrHOE

The LGBT social movement rose to prominence post WWII with the homophile movement. The word homophile emphasised love over sex and the movement began in the late 1940s in Denmark and the Netherlands. It spread during the 1940s and 1950s, with groups campaigning and demonstration peacefully for the assimilation of gays into society.

It wasn’t until 1967 that homosexuality was decriminalised in the Sexual Offences Act, citing that homosexual acts between two men was permissible in private, providing both had reached the age of 21. Scotland followed with an act that came into force in February 1981, and Northern Ireland in 1982. It would be a further three decades before the age of consent was equalised to 16, the same age of consent for heterosexuals.

Fascinating read of the history of Pride and The Stonewall riots. Definitely a good reason for the community to celebrate every year. https://t.co/pYdhvhncps

The final years of the 1960s saw the rise of many social and political movements in the US. These influences, along with the liberal environment of the Greenwich Village area of Manhattan, NYC, served as catalysts for the Stonewall riots.

In the early hours of 28 June 1969, US police raided the Stonewall Inn, in Greenwich Village. The inn, which was owned by the mafia at the time, was one of the few establishments which openly welcomed gay people, and was known to be popular among the most marginalised of the gay community including drag queens, transgender people and male prostitutes.

Nine policemen entered the Stonewall Inn. They arrested its employees for selling alcohol without a license, and cleared the bar, roughing-up many of its patrons. Citing a NYC criminal statute that authorised the arrest of anyone not wearing at least three articles of gender-appropriate clothing, the police took several people into custody.

Pride is not H&M rainbow t-shirts, it's not the glitter, or the clubs, or the multicoloured Starbucks cups.

It's about commemorating an act of resistance, reasserting our right to exist, and pushing for more rights for ourselves and for our less liberated siblings. pic.twitter.com/nuW0xmpkb7

Police raids on gay bars were routine in 1960s America – this was the third such raid on Greenwich Village gay bars in a short period – but the police quickly lost control of the situation at the Stonewall Inn. This time, people outside the bar did not retreat or scatter as they usually had. Their anger was apparent and vocal: they began to jeer at and jostle the police and threw bottles and debris.

Accustomed to more passive behaviour, even from larger gay groups, the police called for reinforcements and barricaded themselves inside the bar while some 400 people rioted outside for almost an hour. The police barricade was repeatedly breached and the bar set on fire. Police reinforcements arrived in time to extinguish the flames, and the crowd was eventually dispersed.

Tensions remained, and a series of protests by Village residents matured into organised activism, with activists united in establishing places where gay and lesbians could be open about their sexual orientation without fear of arrest.

The Stonewall riots are widely considered to be the most important event leading to the gay liberation movement. Within months gay and lesbian rights were being promoted more widely. Within years, gay rights organisations were formed across the world. The first gay pride marches took place in New York, LA, San Francisco and Chicago in June 1970. Today, Gay Pride events are held annually throughout the world to mark the Stonewall riots.

TL;DR: Stonewall is the reason we have Pride as we know it today, and we cannot afford to forget our radically outspoken heritage.

Stonewall was founded in 1989 by a small group of people who had been active against Section 28 of the Local Government Act, a piece of legislation designed to prevent the so-called promotion of homosexuality in school that also stigmatised lesbian, gay and bi people.

The charity believes in acceptance without exception and has been instrumental in achieving equality for the LGBT community on matters of same sex marriage and adoption. Stonewall supports those who can’t yet be themselves and will campaign until “everyone feels free to be who they are, wherever they are”.

Celebrate who you are, with Pride, at an event near you this year.