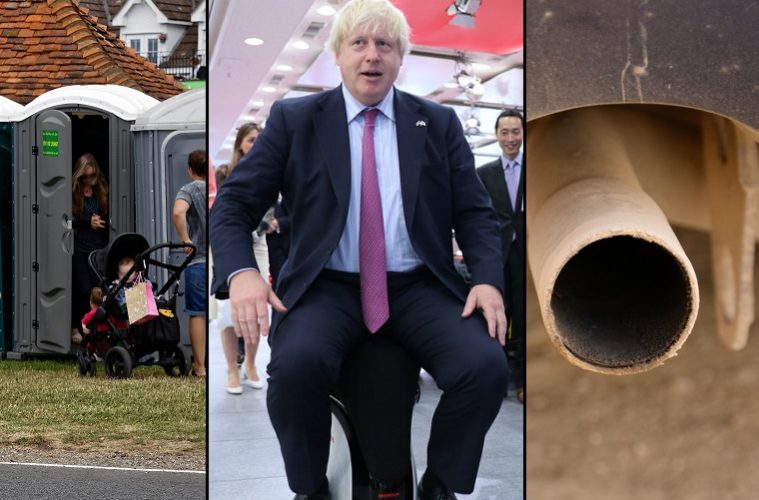 The jokes have been pretty much exhausted already, and there have been plenty, after an underage drinker managed to get her head stuck up an oversized exhaust pipe at a music festival in Minnesota.

Police said this was one of 25 minor issues that occurred at the two-day festival. The girl was freed after fire fighters used a giant saw to free her.

The young lady has actually taken ownership of the incident on Facebook – not surprising when you consider the video has been viewed nearly two million times – by writing “Yeah I’m the tail pipe girl, watchu know about it? #winstock2k18kickedmyass.”

Hey, kids. Here is a life hack: Don't put things on your head that are not hats. https://t.co/asTQX02awx

Not everyone who is caught in an awkward position is prepared to boast however.

In 2009, a skier at the luxury Vail ski resort in Colorado almost suffered double exposure after he fell through a gap in a ski lift. One of his skis kept him wedged in the lift, but his pants somehow came down during the fall and the man was exposed for nearly 15 minutes until he was removed from his predicament.

It was a day like any other in Hemel Hemstead back  in 2013. Until a traffic bollard started walking towards them. Inside was a young man who had thought to brighten up a “boring day in Hemel Hemstead” with a prank. After much tugging and pulling, the joker was released from the street furniture. Someone called the police, despite the man’s friend saying “He ain’t done nothing wrong, he can walk around in a cone if he wants to.” What a load of bollards.

Also in 2013, in Cork, Ireland a Happy Meal became an unhappy meal, when a grown man had to be removed from a baby’s high chair at McDonalds. The man, who passers-by claim had “had a few” before sitting down in the baby seat, was released (quite literally) without charge. A McDonald’s spokesperson said “As you can see, we recommend that children don’t use the high-chair without adult supervision.”

Getting stuck is a crappy thing to happen, but no more so than for those who have found themselves wedged in toilets.

In 2009, Melvin Benn of Festival Republic confirmed that a young lady had been wedged head down in one of the long-drop loos after trying to rescue her handbag. On-site medics and fire fighters managed to release her after what must have been an horrific experience, and handed her over for decontamination.

A half-dressed man was rescued from a portaloo in Claremont, Cape Town in 2003, after passersby heard him calling for help. 40 minutes of trying by police, security and members of the public and the t-shirt clad man was released from the bowl. Anyone who wasn’t helping seems to have been taking pictures and videos for the benefit of anyone who wasn’t there in person.

Someone who couldn’t avoid being spotted when he got stuck is Boris Johnson, Mayor of London, who ended up dangling from a zip wire in Victoria Park, after Team GB’s first gold medal victory during the 2012 London Olympics.

Calling for rope and a ladder to help him down, Johnson tried to style it out, quipping “This is great fun but it needs to go faster”.