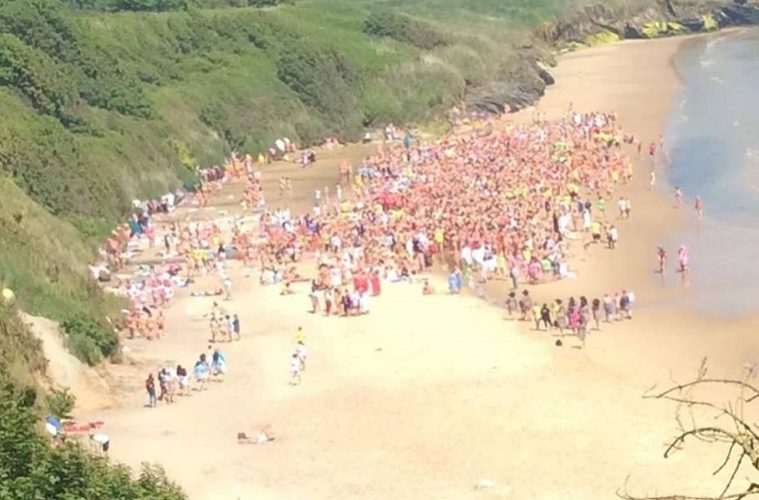 More than 2500 women went skinny dipping this weekend. In Ireland.

2,505 ladies of all shapes and sizes headed to Meagheramore Beach in County Wicklow for 2018’s Strip & Dip, one of the many fundraising events held annually in support of Aoibheann’s Pink Tie National Children’s Cancer Charity.

The charity was set up in 2010 by MIck Rochford and Jimmy Norman, after the tragic loss of Jimmy’s daughter, Aoibheann, to cancer. She was just eight years old.

Jimmy and his family had a large support network of friends and family, but during their year-long battle, they found others had little or no financial or practical support available. The charity was formed in Aoibheann’s memory to remedy the lack of support for other in Ireland, St John’s Oncology Ward in Our Lady’s Children’s Hospital.

On Saturday, it was girls only on Meagheramore Beach as they attempted to set the world record for the largest skinny dip. The ladies had to remain in the water for five minutes to achieve the record, which was formally recognised as officially amazing by Guinness World Records.

Nude swimming isn’t new. Woodcut illustrations from the 16th century showed that swimming was usually costume free. In the 18th century, swimming and bathing for the lower classes was a leisure activity and always done naked by boys and men, and often by women and girls.

Taking the water, a popular spa treatment, was done in the nude and nude female bathing was the norm until the 1670s. As time progressed, establishments sought to impose dress codes, although each town was free to make its own laws.

We broke the world record and repealed the 8th.
Irish women are amazing! pic.twitter.com/RyyBM1gfj0

The Bath Corporation official bathing dress code of 1737 prohibited men and women to swim nude day or night. And so bathing costumes came into being.

Wicklow’s event beats the previous record set in 2015 in Perth, Australia, when 786 people took part in a nude dip. More than €20,000 was donated to Aoibheann’s Charity in a single hour on Saturday, and the money will be used to purchase a family-friendly house in Dublin for the parents of children with cancer visiting the capital for extended hospital stays.

More than 2,500 women have stripped naked to break the world record for the largest ever skinny dip. pic.twitter.com/tmAa8zIk7a

Founder Jimmy Norman described the event as ”the greatest day in the history of our charity”. Find the event, and celebrate the women who braved the Irish Sea on Twitter: search #stripanddip @aoibheannpinkt or follow the journey by liking the Facebook page @aoibheannspinktie.