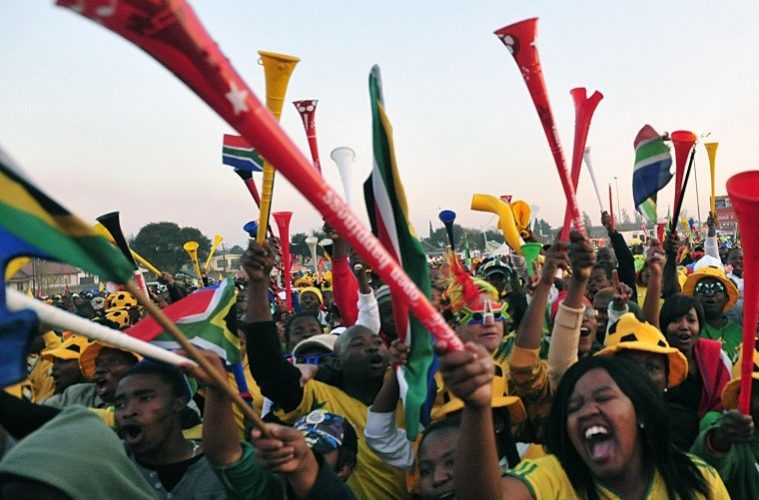 Spoons of Victory and other official World Cup noisemakers

Russians are hoping the spoons – coloured and branded lozhkas that mirror traditional Russian designs – will be used to provide a steady background rhythm to the games, which began this week.

Designed by Rustam Nugmanov, the Spoons of Victory have government backing and are recognised as the tournament’s official instrument, just as the vuvuzela and caxirola before them.

During the 2010 World Cup in South Africa, players, managers and even some fans had to deal with vuvuzelas – plastic horns that blared out fans’ support across the stadium, constantly.

Also known by its Tswana name lepapata, these plastic horns are around 2 feet long and produce a loud monotone note, a little like an air horn. Traditionally, it was used to summon distant villagers to attend community gatherings.

The horns first emerged at the Confederations Cup in South Africa in 2009, the year before the World Cup, but when the Cup itself started, the vuvuzelas forced TV broadcasters to turn down background noise levels during matches.

The vuvuzelas raised health and safety concerns. Competitors believed the incessant noise hampered the ability of players to rest and degraded team performance, others that they disrupted team communication and players’ concentration during matches.

Demand for earplugs to protect from hearing loss outstripped supply, with many pharmacies out of stock and one major vuvuzela manufacturer even began selling its own earplugs to spectators.

FIFA dismissed concerns and the flood of complaints, and allowed the metre-long instruments to be used, except during national anthems. They also became a permanent fixture of South African nightlife during the World Cup period. 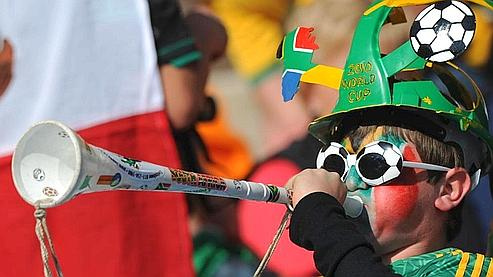 Four years ago, the tournament was hosted by Brazil, and a new noisemaker emerged – a shaker called the caxirola. Created by Carlinhos Brown and based on the traditional caxixi, this  instrument consists of a closed, flat-bottomed plastic basket filled with seeds or synthetic particles, and shaken to create noise.

Researchers at Brazil’s Federal University of Santa Maria determined that it would take 30,000 caxirolas to produce the same sound pressure level as a single vuvuzela.

Although officially recognised as the 2014 World Cup instrument, it was not permitted inside its stadiums as the government considered it a security risk. Brazil and FIFA had underestimated fans’ love of throwing things on to the field.

In 2013, fans were given free caxirolas and pelted the field with them. Concern over the potential for injury, the design was amended, and the new and improved version featured an inflatable body and softer grips. The redesign was to no avail – the Brazilian Ministry of Justice ban remained.

“When we were choosing an instrument which is typically Russian and which reflects Russian cultural values, we had a choice of three: a treshchotka (clapper), a shaker and a lozhka,”  said designer Nugmanov.

He hopes that the spoons will beat out an insistent, but quieter rhythm, one that won’t dominate proceedings like vuvuzelas did – two wooden spoons are held back-to-back while being struck by a third to make a clacking sound. Don’t know how to play the spoons? Never fear, less skilled supporters will be able to buy an adapted plastic pair, joined at the end for easier clicking.

The big question is how much sound will be created if all 81,000 people at the Luzhniki Stadium in Moscow are wielding spoons for the World Cup final in July.

Keep watching the World Cup to find out.