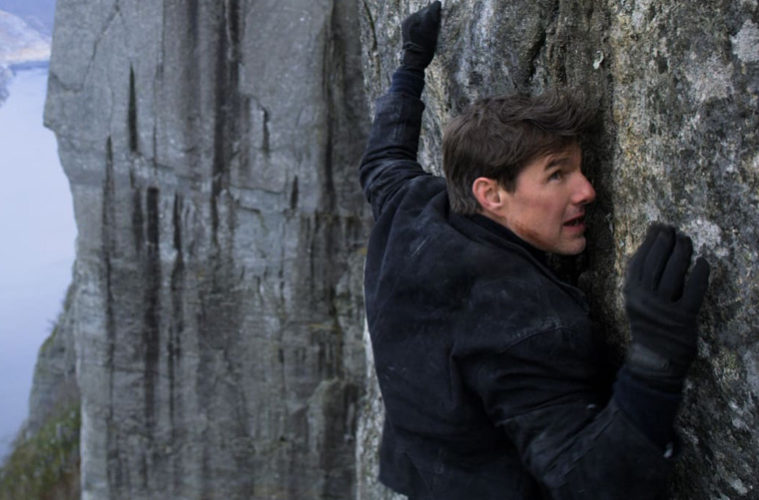 There’s an undeniable fact about Tom Cruise: he makes a brilliant Hollywood leading man. Ignore all the Scientology stuff and references to his height, and when it comes down to it, his is a magnetic and confident screen presence. Central to this appeal is his willingness (some would say foolishness) to do the majority of his own stunts, sometimes resulting in a broken bone or two. Indeed, Cruise fractured his ankle during the filming of Mission Impossible – Fallout and delayed production by 7 weeks (the film was, nevertheless, still released on-time). This commitment shows, however, in the finished product, and M: I 6 is a thrilling ride from start to finish, proving to be a franchise which refuses to show its age…

Speaking of age, the original Mission Impossible film was released all the way back in 1996, and Tom Cruise has just celebrated his 56th birthday. Impressive stuff, considering that the latest spy thriller is as taut and exhilarating as any new action blockbuster. This time, Ethan Hunt (Cruise) and his IMF team must hunt down three plutonium cores which the mysterious terrorists-for-hire The Apostles have stolen to make nuclear bombs. A threat against the entire world is, of course, nothing that Ethan can’t handle, except this time he is forced to work with the rather aloof CIA assassin August Walker (played by Henry Cavill). Things are made more bearable, however, as his old IMF team members Benji (Simon Pegg) and Luther (Ving Rhames) are along for the ride, even as things get rather messy when former MI6 agent Isla Faust (played by Rebecca Ferguson) arrives on the scene.

The first thing to say about Mission Impossible – Fallout is that it’s really fun. In fact, I sat there watching it with a big grin on my face and thinking “I’m really enjoying this” – a rare thing for a blockbuster, a genre which, let’s face it, most of us have seen a million times and which has become rather trite in its predictability. The key to this enjoyment was the action which, in pretty much every set-piece, was well-plotted, nicely shot, and which careered on at a white-knuckle pace. The cinematography (by Rob Hardy) sparkled with energy and some beautiful frame composition which worked brilliantly even amongst frenetic motorbike chase sequences and helicopter dogfights. A sequence when Hunt HALO parachute jumps over Paris (HALO stands for High Altitude Low Opening, in case you were wondering) was shot for real life, with Cruise actually chucking himself out of an aeroplane over multiple shoots. It certainly pays off, as audiences these days are much wiser to green-screen fakery. Seeing such scenes in IMAX would definitely be worth the inflated ticket price.

Even for a M: I film, there’s a surprising amount of violence for a 12A, especially in a visceral fight sequence early in the film which sees Hunt and Walker (sounds oddly like an estate agent, doesn’t it?) trying to steal the identity of the leader of the Apostles, John Lark, using the famous Mission: Impossible face scanner. Mirrors are smashed, water pipes brandished as weapons, and the whole thing is unscored, leaving the sounds of punches to create the painful drama. A helicopter chase at the film’s denouement is also a thrillingly-shot affair, as is an ambush sequence in Paris which reintroduces Solomon Lane (creepily played by Sean Harris), the leader of the Syndicate from Rogue Nation. It really is a brilliant 15 minutes of cinema.

Fallout does a nice job of interweaving its narrative with the previous films. Vanessa Kirby is great as the White Widow, a black-market arms dealer and the daughter of Max, the arms dealer from the first film; the film also revisits Hunt’s relationship with his wife Julia (Michelle Monaghan); and the whole thing definitely has all the hallmarks of a Mission: Impossible adventure, from the twists and turns to the famous line “you’re mission, should you choose to accept it”. This familiarity works in its favour and leaves the audience in eager anticipation of Hunt’s next move. A special note, too, for Rebecca Ferguson’s performance which sparks with tenacity and intrigue as she fights and bikes her way through the web of CIA and MI6 lies and double-crossings.

A few minor points, however: a little more humour could have been injected into the script, especially with the likes of Pegg and Rhames to riff off one another, and Cavill’s American accent, whilst far from terrible, presents a barrier which makes it tricky to engage fully with his character. Nevertheless, he makes for an impressive physical screen presence.

Mission Impossible – Fallout is a tight, action-driven romp, anchored by Cruise’s compelling star power. The action sequences dominate the film – as they should do – and keep the narrative zipping along at a hugely enjoyable speed. The cast are universally great and help to craft a blockbuster which carries the weight of its heritage with poise and ingenuity. Great stuff.