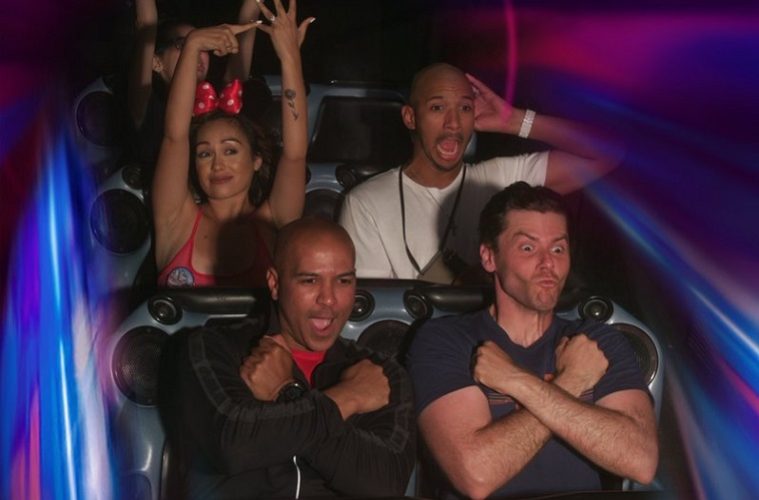 Bride-to-be shows off her engagement ring on Space Mountain

A young woman from America has caused a buzz after her perfectly timed photograph on Space Mountain: showing off her engagement ring mid-ride.

Sonni (@sonni_nicolette) had just been proposed to by boyfriend (now fiancé) @JayWill_5 in front of the Sleeping Beauty’s castle in Disneyland. Speaking to BuzzFeed.com, Sonni said that she it had happened at her “favorite [sic] place in the world“.

According to Debretts, a proposal should be suited to the personality and style of the bride-to-be, and it is traditional for a man to propose with an engagement ring, or in its absence, a token to mark the occasion, for example a bracelet or necklace, ensuring that a ring is “on her finger within a reasonable time – weeks, not months – of her accepting the proposal.

The engagement ring itself symbolises a formal agreement to future marriage and is worn closest to the heart on the third finger of your left hand. Once married, it sits above the wedding ring, which takes its place as the heart’s neighbour.

The pictures that they sell for those rides are hella expensive, but that Space Mountain pic would be worth every penny.

But some engagement rings have their own stories to tell.

Angie Collins from Exmouth, Devon was manicuring her fingernails one December when her family heirloom diamond engagement ring, worth £18,000, was chewed up by her dog. Jack the German Shepherd, a trainee police dog, whipped it from a side table and swallowed the jewel after spitting out the gold band. The next two days were spent watering and sieving Jack’s poo and on Christmas Day, Jack delivered his present. Mrs Collins said of the ring: “It’s completely mangled at the moment“.

A two-year old girl in China swallowed her mother’s diamond engagement ring while her other slept and had to e rushed to hospital to have it removed from her oesophagus before the 2.35×2.05 centimetre ring tore it.

One lady decided to share her story via MumsNet after finding the receipt for her engagement ring. She discovered it had cost her fiancé £1,300, and was upset that he hadn’t spent more.

She posted: “DP proposed and presented me with the ring he’d chosen – a diamond solitaire in white gold. I was so happy and excited to accept but was disappointed when I first saw the ring. The first word that entered my head was ‘small’… His salary is nearing a 6 figure sum and he’s usually very generous…

“Having seen the receipt I know he paid £1,300 for it – which is a lot less than I would have imagined he would have spent on such a significant piece of jewellery.

It’s not clear whether she tackled her husband-to-be on his poor choice, as she finished her post with:

“Someone at work apparently told him that ‘if she makes it all about the ring, then she’s not the girl for you’.” Presumably not, if she wanted to marry him.

Whatever the fate of these rings, they were at least all diamond. Spare a thought for one woman who discovered her expensive diamond engagement ring was, well, not an expensive diamond engagement ring. This MumsNet user was under the misapprehension that the huge stone in her ring was at least two carats of diamond, worth as much as £20,000. At dinner with a friend’s jeweller husband, she describes his look after examining her ring as “a mixture of sympathy and confusion”. A little sleuthing at the store and this bride-to-be discovered her ring wasn’t diamond, but cubic zirconia. Awkward.

Congratulations Sonni and Jay, and thanks for sharing your news with the world!