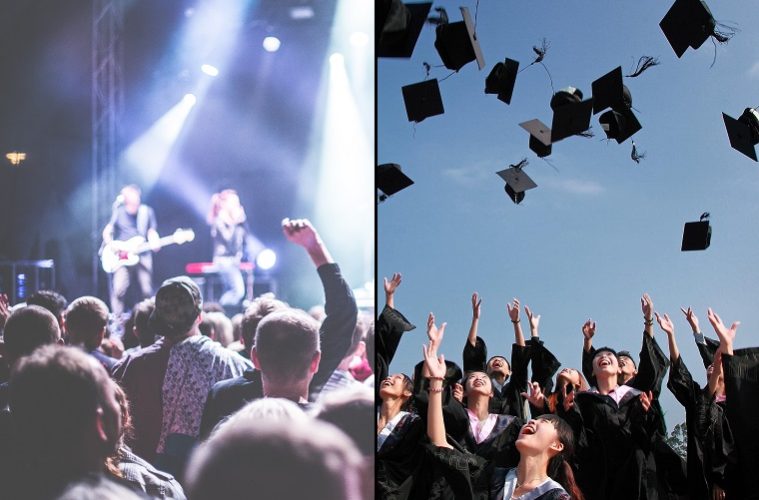 The University of Portsmouth Class of 2018 broke the 5am survivors photo attendance record this weekend. 682 students gathered on the Guildhall steps on Sunday morning (22 July) following their graduation ball and after-party.

The photo has been a tradition since 2012, although not all students make it. Partying finished at 5am, and those that could made their way to the steps of the Guildhall for a final hoorah to celebrate the end of their studies. In total, more than 1/3 of ball attendees made it to their final photo-call, claiming the national standard for turnout achievement.

Graduation balls mark the end of University life and student unions are tasked with creating an unforgettable night. Grad balls are big business, and there’s an unofficial rivalry between universities. And that’s before the students have their say.

9 hours later and we survived for the grad ball survivors photo… #5AM #portsmouth #sleepppp pic.twitter.com/4XBhhuhHUJ

Lancashire’s Student Union came under fire for its plans for this year’s Grad Ball. Not only were feathers ruffled that it wouldn’t be held in the Blackpool Tower anymore, students complained that the acts they would see for their £55 ticket were “cheap”. It was slammed as a “glorified disco”. The irony here is that in 2015, students were unhappy with their ticket prices (£59) and staff and union officers were bombarded with abusive messages asking why they didn’t move the event to the Great Hall (cheaper than the Tower) and book cheaper acts.

Grad balls offer more now than they have ever done. Acts like Pendulum, Tinchy Stryder and Rudimental feature alongside stilt walkers, fire breathers and silent discos, more a mini festival than a ball.

In 2015, Southampton Uni students were “disappointed” when the union announced their final headline act – S Club (perhaps buoyed by the success of securing Justin Bieber in 2013?). Birmingham Uni did better in 2014, securing Clean Bandit at the beginning of their UK career: then days before the gig, the headline act pulled out of their commitment: guess there was somewhere they’d Rather Be.

Student union committees are faced each year with the unenviable task of putting together a line up that will appeal to the majority of their students, providing something for everyone who wants to attend. But it’s a tough gig, with expectations and demands equally high.

In 2013, guests at an end-of-term ball at Oxford University were promised “decadence, debauchery and indulgence“. Instead, they got “burns, tears and boredom”. The £150-a-ticket event was beset with problems from the beginning: organisers had intended to exhibit a live shark, until they received an avalanche of complaints. Entertainers that were advertised didn’t turn up. Alcohol ran out before 1am, well before the 6am curfew. There was just one food stand for 1,000 people, and vegetarians were offered “pita bread and cupcakes”. Students using the maze got stuck in bottlenecks, and the melee to get food and drink before it ran out meant party goers were bruised, or suffered burns to clothes and skin while they waited (and waited) in line for the hog roast.

Ball organisers apologised for the lacklustre event, and denied charges of embezzlement of ticket money, blaming a small committee, inexperience and “staff going rogue” were blamed.

Regardless of whether your SU opts for high-end opulence or not, your Grad Ball is a rite of passage, and your survivor’s picture marks the end of the party and the beginning of your future.

If you’re still awake that is!