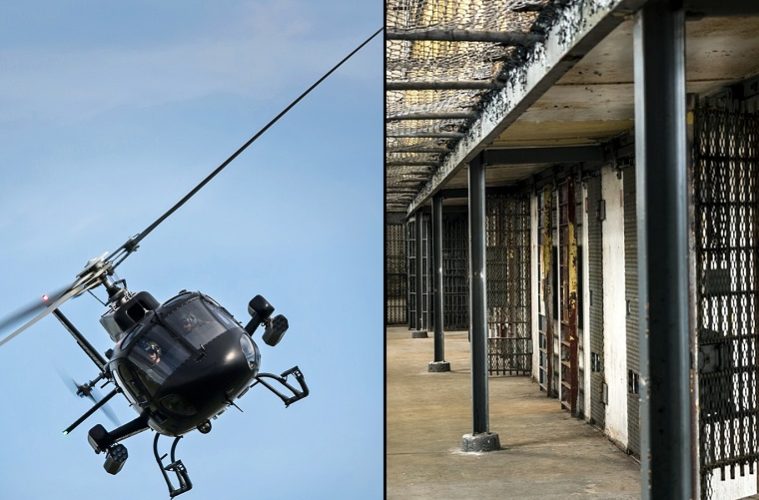 France’s most famous gangster breaks out of prison via helicopter

Police in France are looking for France’s most famous gangster, after he escaped from a prison near Paris.

Rédoine Faïd was being visited by his brother in Reau prison, when three heavily-armed accomplices landed a helicopter in the jail. Two burst into the room they were in and extracted him, while the third man waited in the helicopter in the courtyard with the pilot, who was forced to take part in the rescue.

The helicopter flew across the Paris region before being dumped close to Charles de Gaulle airport and set alight, with Faid and his accomplices fleeing by car. The pilot, a flight instructor, was released uninjured.

It was the second time Faid, 46, has pulled off a spectacular jailbreak. In 2013, he blasted his way out of prison using dynamite, briefly taking hostage four wardens, before being recaptured six weeks later.

Faid, who has said he was inspired by films such as “Scarface” and “Heat”, was serving 25 years for a 2010 cash-transport van robbery that he masterminded.

Helicopter jailbreaks were a regular embarrassment for French penal authorities until prisoner exercise yards in most jails were equipped with nets to prevent choppers from landing. The courtyard the helicopter landed in at Reau was the only one not fitted with anti-helicopter nets.

Pascal Payet is a criminal who has escaped not once, but twice from high-security prisons in France. Initially sentenced to 30 years for a murder robbery in 1997, Payet’s daring escapes have included two personal prison breaks by helicopter, and helping three other people escape via the same route.

Alcatraz was considered one of America’s safest prisons, and its name alone was enough to strike fear into the hearts of the criminals. Officially, no one has ever escaped Alcatraz but it is widely believed that Frank Morris, and Clarence and John Anglin were the only three people who had managed to escape the escape-proof prison. The three burrowed out of their cells, used an air vent to access the roof and a drain pipe to climb down and escape. Officials think that the three were drowned in the sea that surrounds the island, but it is widely believed that they did actually make it to shore, and freedom.

The Midnight Express is one of the most famous prison escapes of modern times, and was made into a film from a book of the same name in 1978. The story chart US student Billy Hayes, who was captured for smuggling hash in Turkey and was sent to prison for 4 years. Weeks before his release, Hayes was handed an extended 30-year sentence. He was given a job on the docks but in 1975, he escaped using a row boat, landing in Istanbul. He dyed his hair and travelled to Greece from where he was deported to America.

British criminal, Alfred George “Alfie” Hinds, broke out of high security prisons three times during his 12-year sentence for robbery. He sneaked through locked doors and scaled a 20ft high wall to achieve his first prison-break, but was rearrested six months later. His second attempt was from the courts themselves: accompanied to the toilet by two guards, he fled as soon as his handcuffs were removed. He was recaptured at the airport. Within a year, Hinds again managed to escape, this time from Chelmsford Prison.

Even after he escaped, Hinds sent memorandums to British MPs pleading innocence of his original crime. He made more than 13 appeals to higher court, and despite all thirteen being dismissed, Hinds was eventually able to gain a pardon, using his great knowledge of the British legal system.

One truly inspirational escape is that of Harriet Tubman, real name Araminta Ross. Born into slavery in the early 19th century, Ross managed to escape from her Maryland owners in 1849, seeking refuge in Philadelphia. She made several missions to rescue family and friends who were slaves, using a network of antislavery activities and safe houses known as the Underground Railroad, despite facing certain death as a penalty if caught. Ross became an icon of American courage and freedom after her death in 1913.