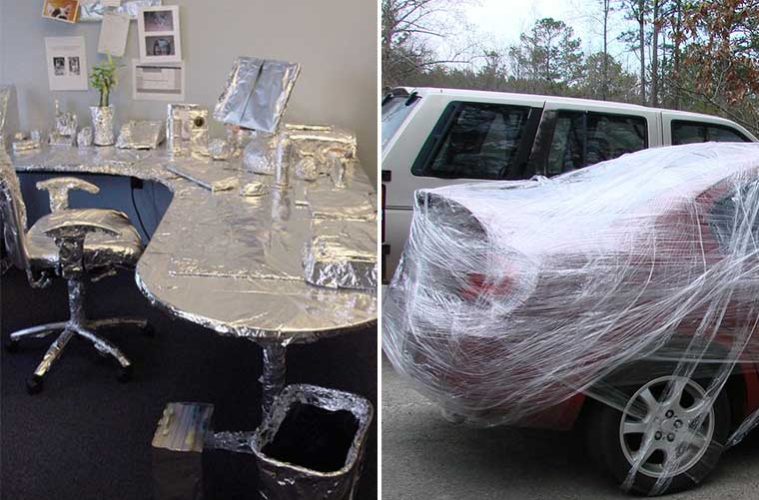 Friday 13th is considered an unlucky day in Western superstition. It happens at least once, but can happen up to three times in the same calendar year. Today is the second Friday 13th in 2018. We’ve put together a list of funny pranks for Friday 13th.

The fear of Friday 13th is known as paraskevidekatriaphobia and superstition around the number itself may originate from the story of the last supper; when 13 individuals gathered on the 13th night of Nisan (March-April), the night before Jesus’ death. Friday 13th was the date King Philip IV of France arrested hundreds of the Knights Templar in 1307: assets were seized, Templars were tortured and many were burned at the stake.

I Have Met The Sweetest Guy Online and I'm Finally Going To Meet Him Tomorrow Night.
He Wants To Go For A Walk In The Moonlight, Which I Think is So Romantic!
He's 6.4, a Chef, I Think, He Said Something About His Favorite Knife & His Name Is Jason.
Wish Me Luck!!#FridayThe13th

There are some rules to harmless pranking: a prank is considered safe providing it doesn’t harm anyone, it doesn’t damage property and isn’t illegal. Pranks shouldn’t be malicious. Of equal importance is that you’re there to witness the results!

Fam: are you ready for #FridayThe13th?

Here are some funny pranks for Friday 13th which you can pull with just a little effort:

It takes a little while for the brain to catch up with taste buds, which makes food pranks a treat to watch.

Pranks involving noises prank a wider audience, scaring everyone who hears them.

Pranksters love subtlety. Small amendments to things can have a big effect, once they’re noticed. And cause confusion until they are!

Of our three favourite pranks, two rely on human nature, and it’s rare the results are disappointing.

Glue a £2 coin to the ground, then retreat to watch how many people bend down to try and pick it up.

Stick paper in the shape of giant bugs on the inside of lampshades: when people switch on the light, they think they’ve been infested.

Or create a Wikipedia entry about them.

Have fun pulling off these pranks for Friday 13th, and please prank responsibly.