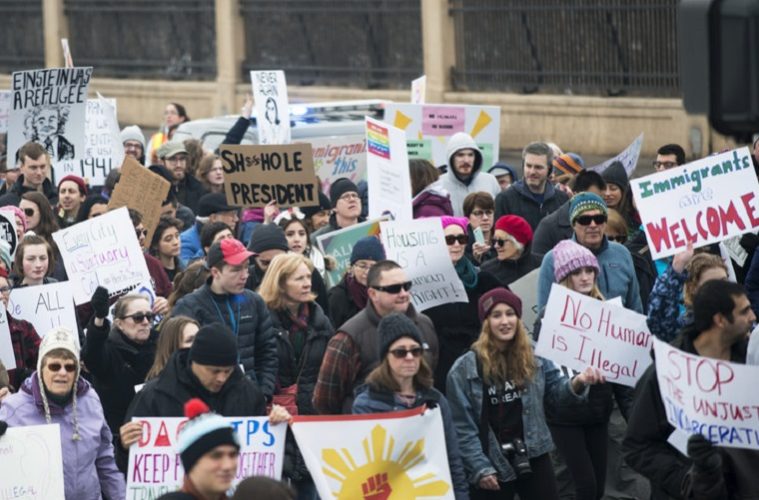 A Swedish student has become a hero in the eyes of thousands, after she risked jail to stop a man being deported to Afghanistan.

22-year-old Elin Ersson was on a Turkish Airlines flight from Gotenborg in Sweden to Istanbul. In the seat behind hers was a 52-year-old man being deported to Kabul. In an act of tearful civil disobedience, Ersson recorded herself as she walked around the plane, a 14-minute video in which she explained the man “will most likely get killed” if deportation went ahead. Her protest, which saw her refusing to sit down and preventing the plane from departing could land her up to six months in prison. Although asked repeatedly to sit down by cabin crew and other passengers, she refused to do so until the man was let off the plane. Eventually he was, and fellow passengers applauded Ersson’s successful protest, but Swedish authorities have said the 52-year-old will still be deported.

Her actions have led to some social media users calling her a “hero”: the video which she live streamed via Facebook, has been seen millions of times. One Twitter user said: “Thank you for your stand, for your courage, compassion and hope”. Another added: “This is what a superhero looks like”.

Student protests are the education world’s version of strike action, and they are getting exposure. In 2010, protests were held against planned spending cuts to further education and an increase on the cap on tuition fees by the Conservative-Liberal Democrat coalition government following its review into higher education funding in England. Largely student-led, the series of demonstration took place in several areas of the country, with the focal point in Central London. The first, on 10 November, involved as many as 50,000 demonstrators marching through central London, with several hundred launching an attack on the Conservative Party headquarters, leading to condemnation and a schism within the student movement. A march in Central London in late November descended in violent confrontation and this, and subsequent protests, resulted in the contentious use of kettling.

If ever you think one person can’t make a difference, then watch this!

Huge respect to Elin Ersson, a student at Gothenburg university, for – literally – standing up for what she believes in. A true inspiration https://t.co/81NI3gzdO0

The protests didn’t cover students with glory – violence and vandalism saw to that. Protestors outside the offices of The Guardian newspaper sentenced an effigy of Nick Clegg, sentenced it to death and executed it by hanging. Several thousand protestors, most of which were students of some age, gathered in Trafalgar Square and proceeded towards Whitehall shouting “Fuck David Cameron”. Some protestors took it as an opportunity to wreak damage and destruction, vandalising a police van, bus shelters and ticket machines. On 24 November, several university buildings were occupied by groups of students, protesting on the issue of higher education cuts and tuition fee rises.

Students at the University of Northampton are staging a positive protest by seeking to be recognised as a University of Sanctuary, committed to welcoming and supporting refugees and asylum seekers.

In a news article by the university, International Development undergraduate, Kelsey Clarke, is part of the Northampton STAR (Student Action for Refugees) group said:

“Integration can be problematic for refugees and asylum seekers, and access to education is surely something that would help them to assimilate, better themselves and the town.

“We hope the University will gain official University of Sanctuary status, which would hopefully lead to the uni providing scholarships and assisting with accommodation.”

“These people are humans, we need to show our humanity.”

Harry Truman famously said “The ‘C’ students run the world”, referring to his belief that success can only truly be appreciated by those that have experienced failure.

Although Elin Errson’s actions won a battle, and not a war, her protest and that of students across our planet is evidence that students really do have the power to change the world.

This is about the power we actually have. And it's far more than we dare to think. What would happen if you actually accepted your personal power and DID something with it? The mind boggles. #personalpower #ElinErsson #Changetheworld https://t.co/hlmLjm6eHF