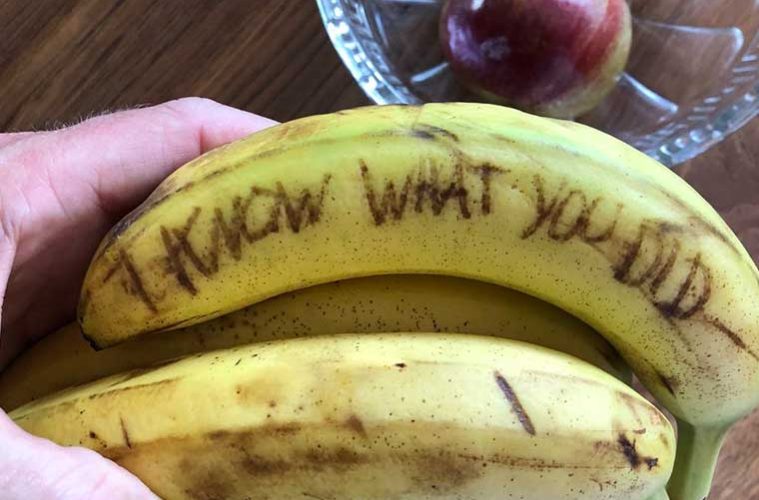 Trolling has just stepped up its pace: bananadrama.

People are writing messages on banana skins, then leaving them for unsuspecting shoppers to buy and take home. After a while, the etched skin discolours and the message appears on the side of the fruit, with heart-warming results. Some are using nature’s invisible ink to send heart-chilling messages too.

“I know what you did” or “You’re not alone here” are just two of the scary messages that have appeared on the bananas, but others have left messages of love for children or partners such as “You’re amazing” and “Mommy loves you”.

Scratching haunting things into bananas at the market so when people take them home hours later and the words appear they think a ghost knows their secrets. pic.twitter.com/aDOMd3K8cX

By nature, humans are gregarious: since the beginning of mankind, we have lived in social groups and generally people prefer company to solitude. People spend more time on social platforms than they do watching TV, a gap of almost 20% of Millenials. That means that TV and traditional media no longer have the efficient or wide reach they once had.

I have some interesting, not-Twitter appropriate comments I’ll be carving next time I’m at the Carytown Kroger https://t.co/rvotsEBXtG

To troll properly, your dialogue has to be deliberate, clever and likely to piss people off. You must convince your victim that what you say is true, no matter how outrageous it is. Essentially then, you must deceive. You’re aiming to make unsolicited or controversial comments with the intent of provoking an emotional reaction from unsuspecting readers to engage in an argument.

That's fucked up and brilliant. https://t.co/zzQO5zSDF3

We’ve seen, loved and shared a number of excellent examples of trolling.

David Thorne trolled an electric company in Australia when they sent him an email demanding payment of his overdue account. David wrote back to tell them he had no money, but he did send them a drawing of a spider which he valued at exactly the same as the amount outstanding on his account, considering the debt resolved.

Justin Bieber was trolled when a website asked users to decide which country Bieber should tour next on his “My World Tour” tour. The contest closed after 659,448 votes were cast to send the pop prince to North Korea.

Trolls love an easy victim, and You’re Beautiful singer songwriter James Blunt may have seemed easy pickings. But Blunt has true British mettle as fans of his Twitter account @JamesBlunt will know. The man has red hot wit and spares no one with his savage responses to those that troll him, often sending himself up, which makes us love him all the more.

Everything must seem boring to an axe murderer.

One word of warning however: mass media uses the term troll as a blanket term for anything from a harmless prank to harassment, so troll carefully. Or just enjoy other’s. And keep your eyes peeled for messages in your banana skins!