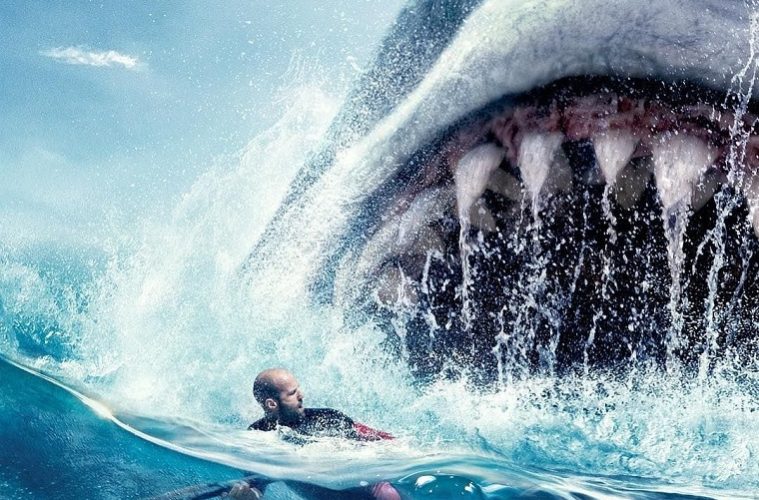 Never one to be typecast, Jason Statham is back on our screens as tough guy Jonas Taylor – expert diver and the man to whom everyone goes when they manage to lose people at the bottom of the ocean. It’s a role for which Statham has had plenty of preparation: recent years have seen him wield a pistol and beat-up everyone who looks at him strangely in films such as the Transporter series, The Expendables, The Mechanic and Fast & Furious 6, 7 and 8. His is a career made on being the antihero with plenty of emotional baggage and the bulging biceps to match, and this latest adventure sees him take on a prehistoric shark in the rubbishly-titled, mediocre, but not entirely without merit, The Meg.

The Meg in question is, of course, a Megalodon, last seen in the Earth’s oceans some 2.6 million years ago. And it’s a good thing, too: reaching some 18 metres in length and with a mouth to match, this monster of the sea is accidentally allowed to escape the darkest depths when Jonas is called in to save the submarine crew of Mana One, a scientific research mission led by Dr Minway Zhang (Winston Chao) and his daughter Suyin (Li Bingbing). The proceeding 90 minutes of action runs along the lines of what only can be described as Jaws-on-steroids, with a few shots of a shirtless Statham and some high-tech submarines thrown in for good measure.

If you’re after something innovative and surprising, you’ll be disappointed as The Meg (based upon the 1997 book by Steve Alten) does little more than tread water as it navigates its way through familiar action movie tropes, regularly punctuating the developing emotional bonds between Jonas and Suyin with predictable scares and with jokes which are almost funny. The special effects are competent enough, and the narrative motors along at a decent pace, but the elusive spark which helps B-movies such as this to truly excel is unfortunately lost at sea.

I watched The Meg tonight. If anyone dares give it less than 100% on Rotten Tomatoes, they're either a joyless wanker or just bloody dense

There’s no one single aspect to the film which is responsible for this: the performances are fine (indeed, the subtle glances of affection between Statham and Bingbing are actually fairly convincing); the scares, whilst relying totally on jump-tactics, are effective in getting the job done; there’s plenty of gore and severed limbs to please a teenage audience; the monster itself is perfectly acceptable as it looms out of the murky darkness; and the characters are pleasingly diverse. But the sum of all of these parts never adds up to anything. The film indeterminately floats in the middle of the cinematic ocean, never managing to be bad enough to be good fun, nor good enough to be enjoyable.

As summer blockbuster pictures go, Statham is a good bet to pull in the crowds and, again, his performance – with all its shark-stabbing and wetsuit-wrangling – is fun to watch. Nevertheless, we’ve seen it all before and this familiarity threatens to breed uninterest on the part of the audience: the threat posed by the shark to Statham’s character is never compelling as we know he’ll get out of the water alive. This is, of course, part of the enjoyment of B-movies, and the familiar territory does allow Statham some mischief in the role. The only thing is, the results are nothing if not forgettable.

The Meg was boring, unimaginative, cheaply created and lacking in either fun or suspense. Skip it. Trust me.

Director Jon Turteltaub (whose previous work includes the cult classic Cool Runnings) does handle the script with confidence and, together with cinematographer Tom Stern, throws the camera around in the underwater sequences in a dynamic manner. This is especially the case in one scene when Jonah swims out to the shark in order to place a tracker on it, and the point-of-view shot as he bobs in and out of the water trying to catch sight of the shark is one of the best in the film. In fact, my favourite moment comes in the very final shot – a pun on the French credit for “The End”. You can probably guess.

Perhaps The Meg should be retitled as The Meh. Despite the humongous and aggressive eponymous creature, and notwithstanding its perfectly fine performances, the film has no real zing to captivate its audience. The whole thing ends up floundering in its own mediocrity and, in the cut-throat world of cinema, the box office sharks have started circling, ready to pick at its unexceptional carcass…