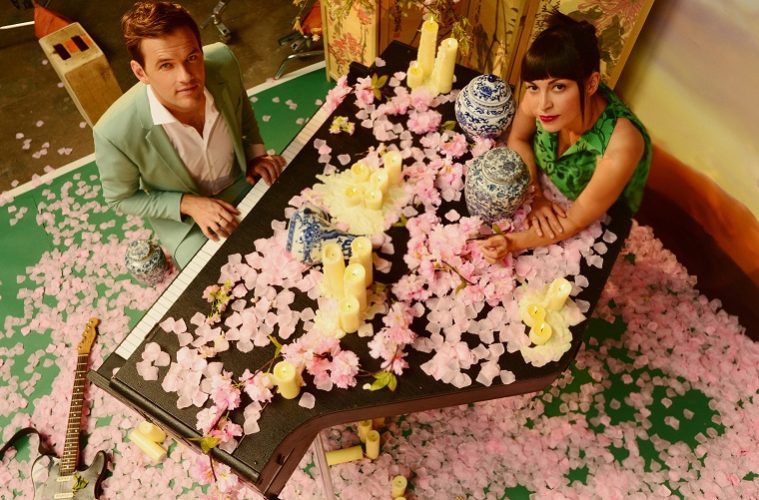 St. Lucia on their much anticipated upcoming album ‘Hyperion’ and future plans

Brooklyn-based indie-pop group St. Lucia have made waves in the music industry with their unique sound of high-energy artful pop tugging on the heartstrings while pulling you towards the dance floor. St. Lucia will take off on a headline tour across North America to celebrate the release of Hyperion this fall. We had the opportunity to speak to St. Lucia’s frontman, Jean-Philip Grobler about their much anticipated upcoming third album ‘Hyperion’, influences and future plans…

Q1. What was the first record you ever bought?

This is definitely revealing my age, but I think it was Dr. Alban’s ‘Sing Hallelujah!’ Lol.

Q2. Have you always known you’ve wanted to be in a band/playing music?

Well, I always knew I wanted to do something creative, but music is the thing that always affected me the most deeply and kept pulling me back to it. Sometimes I wonder if it’s almost more of an addiction than a career because there are cleeeearly downsides to being involved in music, and it’s so uncertain in so many ways but when it feels good, it feels really good so I’m still here.

Memorable good/weird: Shaquille o Neil and Nicholas Cage watching us from side stage when we supported Snoop Dogg at SXSW a few years back.

Memorable bad: Running off stage and crying in an alley when I lost my voice at SXSW a few years back in front of Usher etc. I was eventually convinced to come back. Somehow these extremes always seem to happen at SXSW.

Q4. Any advice for upcoming bands?

Trends come and go, so find what’s unique about yourself and go with that because if you stick around long enough, the world will come around eventually. Or just realllllly commit to the trend.

Q5. When you’re not in the studio creating music what do you listen to?

Normally when we’re not in studio mode I’m in music discovery mode, because I tend to isolate myself when we’re working on a record. It’s normally a mixture of discovering older artists that I might have missed, like right now I’m really into this Tropicalia artist called Milton Nascimento from Brazil who makes the most amazing electric records. In terms of newer stuff, I’ve been super into Peggy Gou recently, as well as Kali Uchis, Altin Gün (really awesome Arabic psych rock band based in Amsterdam). The new Amen Dunes album is pretty amazing too. Lots of great new music out there, I’m probably forgetting a bunch.

Q6. So you’ve announced your new album ‘Hyperion.’ What should fans be expecting from it?

It’s a looser, more live sounding, more personal and way more romantic version of St. Lucia. I feel like our last record ‘Matter’ was overall quite intense, and with this one it just feels a bit more emotionally ‘generous’, if that makes any sense. I’m probably way too close to the music to be able to give you a good run down, but this is what people have been saying.

Q7. Can you tell us a bit about the creative process for it?

It really started with us having some bad experiences at some writing sessions. Patti (my wife and member of the band) and I were basically told over and over by some big pop writers that we should be more like ‘x’ artist or ‘x’ band, and we just came to a point where we realised that wasn’t the road we wanted to go down. We were doing it just to experiment, but realised that that way of doing things isn’t the road to depth or to uniqueness, and we’re way more interested in that. We decided to basically rely on ourselves as much as possible, at least with the writing, and I think that resulted in a much more personal and unique record.

I also just did a lot of research going into the record as to how some of my fave records were made. In general, records that skirted the line between pop and ‘interesting’, overall that’s what I’m aiming for. I love pop, but I don’t want pop to mean that something is watered down or emotionally and intellectually vapid. So I took a lot of cues from those records and the key thing was playing in the room together as a band. A lot of songs started that way, even though they changed in the end, and they were done in that spirit.

Q8. What’s the meaning behind the album for you?

To me, it feels like the record is at odds with a lot of what is going on in the world right now, and in music. It almost feels like romance is dead, but songs like ‘Last Dance’ and ‘Next to You’ are highly romantic. It’s quite a spiritual record, even though I’m not specifically Christian or Buddhist or anything. I just think that there is this thing in all of us where even though science has answered so many questions, the deepest and most important ones that we wrestle with every day as humans can probably never be answered, and even if you call yourself an atheist those questions still linger. So songs like ‘Paradise is Waiting’ and ‘A Brighter Love’ deal with that.

I also thought a lot about food and how people are so much more conscious of the ingredients they put in their body, but they don’t necessarily think of what the music they’re listening to is made of. So we consciously made a record that’s made up of the best musical ingredients we could come up with. We want people to feel enriched after they hear our music, like they’ve had a massage or something. Lyrically it also attempts to deal with some of the injustices and ironies of our times, like the song ‘Gun’ is about gun control in the USA, but at the same time it’s a metaphor about the misuse of power. ‘Next to You’, while being romantic, is also about how the world appears to be falling apart but how you can make your own paradise, in a way. But overall I’d say the record is still very fun to listen to despite dealing with some heavy stuff.

Q9. How would you say your music has changed since you guys first formed as a band?

I think it’s just natural that you grow if you allow yourself to grow. To me, our music is way less overtly ‘Tropical Synth Pop’, which is how we were described in the early days. I have this thing and I’m sure it’s lost us some fans over the years, but I never want to repeat myself. All of the artists that are most exciting to me always seemed like they were breaking new ground, and so I aspire to the same ideal. If you repeat yourself, you eventually mine that vein of gold empty and then what? You have to venture out and find new lands to conquer and that’s what we’re doing while staying as true to ourselves as we can.

Q10. Who are the bands biggest influences?

I’d say overall that the ones that really stick with me, and that I keep coming back to, are certain artists and albums that have become part of the canon. I’m really interested in why some albums that are artistically really good and deep can also connect with so many people. Pop is so often a ‘dirty’ word, or it’s considered corny that you cite Led Zeppelin, Radiohead, Fleetwood Mac, Bowie, Michael Jackson, Prince, Kate Bush, U2 etc as your influences, but there’s a reason they’re so well known and have connected with people. It really seems to me that at some point in their careers those artists tried to make something really good as well as something that really connected, and that’s really what I am attempting, not trying to emulate those artists, but rather being guided by their approach. I believe in the power of pop music beyond just being musical cotton candy. It can be something more, something transcendent and transformative.

Well, the album comes out September 21st and then we hit the road, which we always love. I feel like it’s when we start touring that people really start connecting with our records.