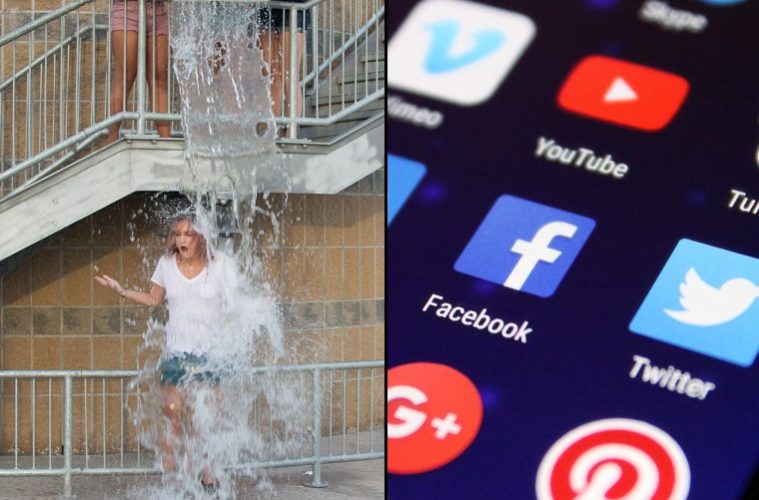 #fallingstars2018 challenge is one of the latest internet crazes to go viral in Russia and involves people photographing each other playing dead in bizarre positions and situations – basically, sharing their best fake fall. The fallen star then nominates their friends and followers, and so it perpetuates.

Millionaires, super models and even the former Miss Ukraine have been captured tumbling to the tarmac from private jets, yachts and limousines: the more dramatic the nosedive, the better.

Considerably more sinister is the report from CBNNews.com that the recent internet craze, the “momo challenge” is raising concern among parents and law-enforcement officials alike.

This challenge encourages people to text a random number on WhatsApp. A creepy bird woman responds and challenges the user to perform a series of dares, threatening the leak of personal information if the dares are not completed.

Last year it was the Blue Whale Challenge that claimed several teen lives across the globe. This year, it is the #MomoChallenge that is making teens and parents anxious. Here’s what you need to know about the Momo Challenge and what to watch out for… pic.twitter.com/Q1kvu6kVsF

As the challenge continues, messages and images become increasingly violent and threatening, encouraging the user to complete dangerous activities. The craze has been linked to the suicide of a 12-year old in Argentina, and the BBC reports that the craze has spread to Mexico, the US, France and Germany.

Back in 2014, the ice bucket challenge went viral across the world. Scores of celebrities as well as thousands of lesser mortals took the challenge before nominating someone else to do it, and hundreds of videos were made, and shared, of people the moment buckets of ice were poured over them. Many did it for the fun, not realising the ALS in the challenge title stood for Amyotrophic Lateral Sclerosis, a lifelong condition that received breakthrough funding as part of this viral charity campaign.

We’ve had videos of the Kiki challenge – thanks Drake – which has given us plenty of giggles: a sprightly 91-year old, a young girl whose mother drives off mid-challenge, and a number of car-thefts or knock-downs by oncoming traffic.

And then there’s the Baby Shark. And Mummy Shark. And Daddy Shark (you know where we’re going with this, don’t you). Dog shaming; planking; Pokémon Go. Who knows what’s coming next and where it’ll start.

What we do know it that the world loves a craze and thanks to the internet, we can be crazy together.