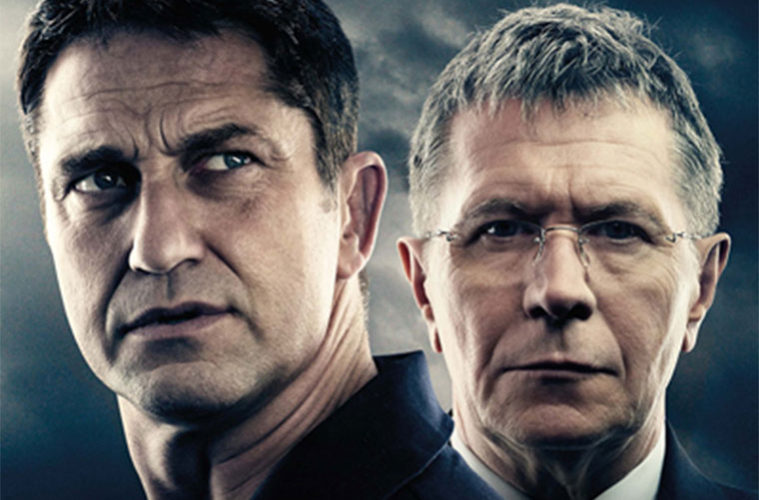 Dive, dive, dive! More like dull, dull, dull! Gerard Butler’s latest action film Hunter Killer sees him single-handedly prevent World War Three as he captains a US submarine which is stuck in a cat and mouse game with Russian subs in the icy waters off Russia. There is, of course, a certain attraction in the ridiculousness of these type of films: endless explosions, preposterous plots, energetic performances and punchy one-liners all have their own lure in their brand of “switch-off and enjoy” cinema. Hunter Killer, however, pushes far beyond the “leave-your-brain-in-the-foyer” fun and does little to keep its audience awake, let alone engaged.

This film will surprise you at every turn. See @common & Gary Oldman in #HunterKiller this Friday. Get your tickets now at the link in bio.

Action films are a difficult genre to craft. Ask any successful director of comedy films, for example, and they’ll tell you one thing: it’s hard and serious work making comedy. More often than not, if it looks like the actors had a laugh on-set, then the resulting film is rubbish. And so it is with action thrillers: they need to be tight and well-paced, with well-crafted narratives and convincing visual effects. As an action film, Hunter Killer is none of these things, flicking as it does between submarine fights and unfolding military chaos on-land. Gerard Butler plays Commander Joe Glass, the new captain of the USS Arkansas which is embroiled in a high-stakes conflict after the Russian President is kidnapped by one of his ministers who is intent on starting nuclear war with the Americans.

The American response is co-ordinated by Gary Oldman as the Chairman of the Joint Chiefs of Staff, who seemingly handles every situation by shouting at a room full of people in the hope of de-escalating tensions. Gerard Butler is on his usual blockbuster form and makes for easy watching, even when presented with a script which is rather stilted as it attempts to deal with ideas about pre-emptive warfare and the tricky tightrope that is international relations.

The main problem is, the film can’t get passed its contrived and uninspiring script. When his submarine comes under attack from a Russian destroyer, for example, Commander Glass employs the help of a Russian sub captain he has rescued (played by Michael Nyqvist, in one of his last roles before his death in 2017) to talk to the men on the destroyer who, surprise surprise, he trained-up back in the day. The resulting shots of Russian sailors, looking up at the tannoy with shock and awe as their beloved former captain recites their names to convince them of his authenticity, are cringe-inducing, to say the least.

Critics are saying #HunterKiller is “immersive, thought-provoking and ridiculously entertaining.” Get your tickets now and see it in theaters Friday. (Link in bio)

More generally, the claustrophobic world of a life underwater is presented without much thought, and when attacked, the submariners randomly shout out more numbers and decimals than can be found in an A Level maths paper. It is obviously meant to ratchet up the tension but it just results in a confused and hollow spectacle. The green-screen special effects are a bit ropey and the film mixes stock footage with its CGI submarines and warships. The resulting mishmash doesn’t help to engage the audience, and neither does the narrative which relies far too much on cliché: a problem, when the action which could have propped-up the familiar genre tropes is largely uninspiring. The land-battle scenes offer a welcome respite from the confines of the submarine (if only because they give something a little more interesting to look at than a load of monitors emitting incomprehensible noises and sonar waveforms) but, again, they suffer from a lack of a decent script.

These scenes centre on an attempt to rescue the Russian president, ordered by the US president (sporting a very Hillary Clinton-esque haircut). A team of elite Navy SEALs – led by Toby Stephens –  are sent in to recover the president, whilst Butler and his motley crew of submariners are tasked with extracting the party from the enemy base. Again, the whole thing is preposterous, and I was left trying to work out how the rescue party could parachute through a thunderstorm and yet land in bright, sunny conditions. I devoted a good five minutes to this task, hardly a ringing endorsement of the grip-your-seat action which was clearly intended.

Hunter Killer may well be a film about submarines, but it plumbs the depths of Gerard Butler’s particular brand of action blockbuster. He himself is perfectly acceptable, but everything else around him, from the dodgy special effects to the ludicrous narrative and unconvincing plotting, is pretty dull.