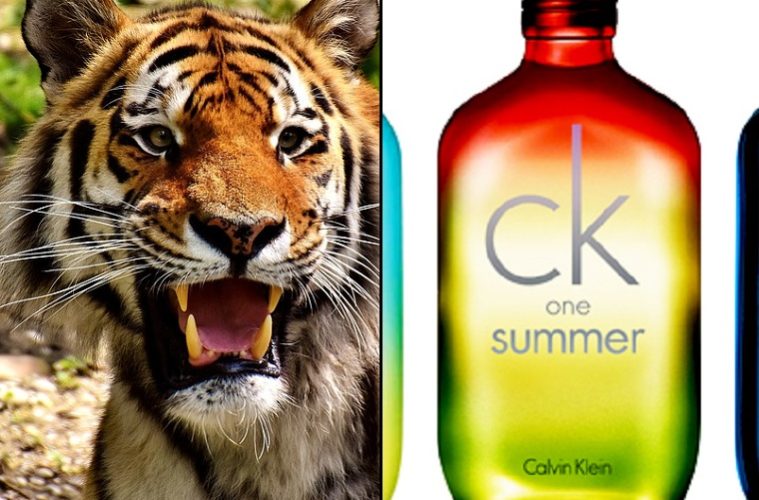 Secretions and excretions: perfumes of the animal world

When it comes to finding the perfect perfumes for a 450-pound Siberian tiger, you won’t want to make mistakes getting it right. Fortunately, someone has already carried out the experiment, and the result is that 8 out of 10 big cats prefer Calvin Klein’s Obsession for Men.

It’s long been a practice to spray perfumes and aftershaves on features and toys within animal enclosures, as it keeps the zoo animals interested in exploring the smells and keeps them visible for visitors. The General Curator for New York City’s Wildlife Conservation Society’s Bronx Zoo took a scientific approach to the spritzing, something that animals often do in the wild to mark out their territories. 24 scents and several big cats later, the results are in. Estee Lauder’s Beautiful bottomed out, keeping two cheetahs occupied for a mere two seconds. L’Air du Temps, Nina Ricci’s timeless fragrance is both spicy and delicate, and the cheetahs enjoyed its scent for more than 10 minutes. The clear winner though was Obsession for Men, which kept the cats occupied for more than 10 minutes.

Mr. Thomas’s findings spread quickly through the Wildlife Conservation Society’s network of global operations and Obsession for Men has been in use since 2007, helping Guatemalan studies of jaguars by luring the cats towards the cameras.

But what makes a good scent? Aside from the floral or spic combination, the bouquet, you can tell the mark of your perfume by its staying power. And our olfactory envelope is often powered by animal secretions, digestions and excretions. Using some of these ingredients is contentious, because it involves killing the animal to remove the essence.

Ambergris is a growth that is found in the stomachs and intestines of whales and sometimes found washed up on the beach – it costs a fortune, so beach combing is worth doing! When it’s developed it acts as a fixative, meaning perfume last longer, with a natural sweet and musky odour. When it’s freshly expelled by the whales, it’s basically poo.

Musk glands are harvested from musk deer, from a hairy pouch about the size of a golf ball that is in front of the deer’s penis. It’s not been possible to replicate the musk in a lab – so the deer doesn’t survive this process – but who’d want to collect musk from a sexy deer anyway?

Male and female civets are cat-like creatures from Africa and Asia who secretions are regularly added to perfumes and add a naturally floral scent when diluted. When harvested (it’s farmed from these civets), it smells like poo. But it’s the civet in Calvin Klein’s scent that is driving the big cats crazy.

It’s worth noting that civet doesn’t smell faecal when it’s doing its natural wooing in the wild.

And we don’t think Obsession for Men smells like shit either.

Obsession for Men launched in 1986 and remains one of the best-selling men’s fragrances on the market.