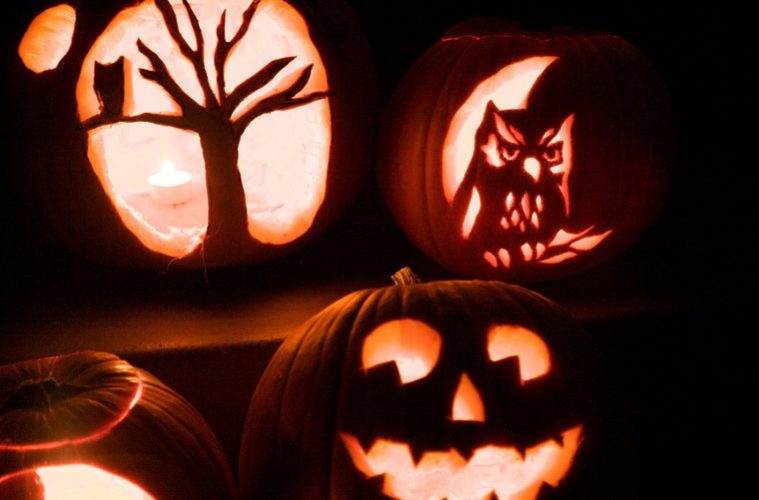 How to carve a pumpkin!

Irish myth tells the story of Stingy Jack, a man who tricked the Devil for his own financial gain. When Jack died, God wouldn’t allow him to enter heaven, and the devil refused him entry to hell. Jack was sentenced to roam the earth for eternity.

To frighten away Jack’s wandering soul, the Irish carved demonic faces in turnips. When their ancestors moved to America, they continued the tradition of carving jack-o’-lanterns, from the native pumpkin.

The ancient new year fell on 1 November, signalling the end of the summer, and the festival of Samhain was believed to be a time when the souls of those that had died moved: souls of those who died in the previous twelve months travelled to the otherworld; souls of those who had died in previous years would return to visit their homes. Festival traditions included wearing disguises to hide from the souls wandering your home.

In the 8th century, the Roman Catholic Church moved All Saints’ Day, so that it would fall on 1 November. This means All Hallows’ Eve, Halloween, fell on 31 October.

Folklore, religion and beliefs collided to create the modern Halloween, and the traditions we follow.

Here’s how to carve a pumpkin… the easy way. The intricacy of your design is down to your ability, but here are a few tips to help:

If carving’s not your thing, you could try painting a pumpkin (or squash), adding drawing pins for a 3D effect, tattoos, or any decoration you like.

“The jack-o-lantern follows me with tapered, glowing eyes.
His yellow teeth grin evilly. His cackle I despise.
But I shall have the final laugh when Halloween is through.
This pumpkin king I’ll split in half to make a pie for two.”
― Richelle E. Goodrich, Slaying Dragons