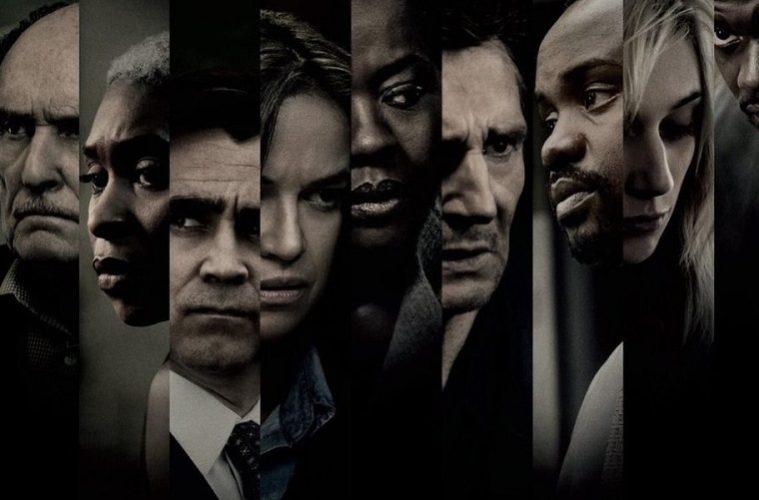 The stakes are high in Steve McQueen’s latest project. That said, when have the stakes never been high in his films? Director of Hunger, Shame, and 12 Years a Slave (the latter earned him an Oscar and BAFTA for Best Film), McQueen’s body of work has seen him tackle Irish hunger strikes, sex addiction, and nineteenth-century slavery. In his latest, Widows, three women get together to pull off a heist which will, quite literally, save their lives. And it’s brilliant.

Widows introduces us to big-time criminal Harry Rawlins (played by Liam Neeson), who meticulously plans and records every past and future heist in a secret notebook. Harry bites off a bigger job than he can chew, however, and steals $2m from Jamal Manning (Brian Tyree Henry), a crime boss who just happens to be running for local elections. The job goes wrong and Harry and his team are killed, leaving behind his wife Veronica (Viola Davis) to deal with the consequences when Manning comes looking for his money. Veronica has little choice but to take on Harry’s next planned job herself, and recruits the widows of Harry’s gang mates to help her.

What ensues is a taut and thrilling heist film with a compelling narrative, stellar performances, and enough grit to winter-proof the M5. Jamal Manning is running for public office in a depressed and forgotten neighbourhood of Chicago: predominantly black and plagued by unemployment and a lack of opportunity. Running against him is Jack Mulligan (played by Colin Farrell), a wealthy politician who enjoys just a bit of nepotistic good fortune. Publicly, Mulligan and Manning plan to conduct a fair democratic battle, but in private, both are linked to the criminal world of Harry Rawlins.

The plot sees Harry’s wife assemble her team of widows in fairly conventional heist-movie fashion. Michelle Rodriguez (most famous for the Fast & Furious franchise) plays one of the widows, left with two children and a dress shop which has been repossessed by a man to whom her husband owed gambling debts. Elizabeth Debicki completes the team, a naïve young woman who turns – at the suggestion of her vampish mother – to escorting so she can pay her way through life. Veronica gathers the group together (in the rather unlikely venue of a sauna) to brief them of the danger in which they find themselves after their husbands’ deaths, and to convince them to help her pull off the heist.

As Veronica, Viola Davis again asserts herself as a cinematic tour-de-force, displaying both vulnerability and brute strength of will as she negotiates her way through her post-Harry life. Veronica’s pain of losing not only her husband but also her son to police violence is hard to watch, but ultimately creates a character with whom the audience can empathise to a great extent. Davis provides the strongest of anchors for the other cast members to shine, and both Debicki and Rodriguez give fine performances.

McQueen (together with Gone Girl screenwriter Gillian Flynn) crafts a tensile script which explores a whole range of affecting social and personal issues, ranging from grief to corruption and racism. To be sure, the heist is the central driver of the plot: the actual sequence is shot with a thrilling tempo and is scored with an unrelenting, yet subtle, score from everybody’s favourite film composer, Hans Zimmer. Elsewhere, the level of violence is shocking, and yet it feels appropriate as it raises the stakes for the characters and, therefore, makes their actions all the more convincing. Crime boss Manning has his brother to do much of his murderous dirty work, played by Daniel Kaluuya in a suitably unhinged performance.

Under the direction of Steve McQueen, Widows becomes more than just a heist thriller. It engages with troubling ideas and issues which are rendered with sensitivity and power by its actors. McQueen’s muscular and intense style works wonders to create a dark world where women – full of tenacity and strength – are given the chance to determine their own fate. Fantastic stuff.