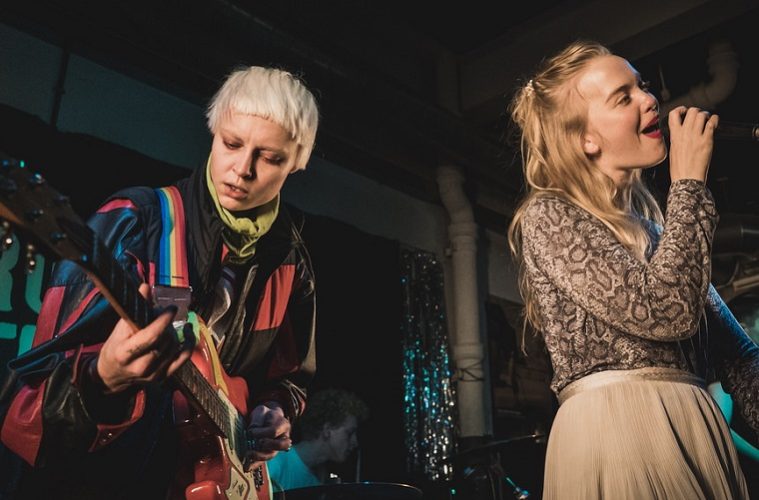 Nothing could have woken up Nottingham anymore on such a dreary Wednesday night than the powerful punk rock sounds of Dream Wife.

London’s based trio of Rakel Mjoll, Alice Go and Bella Popdec, who formed back in their school days in Brighton, bring a vibrant and intoxicating sound that make you want to go out and form your very own band. Initially setting sails as a group art project back in 2014, its almost hard to believe they’ve only just released their first debut album earlier this year in January named simply ‘Dream Wife’. The magnetic energy that they brought to the stage filled and flooded the entirety of Rescue Room’s hall and is definitely something that must be experienced first-hand (trust me you won’t regret it). Was it the shrieks and howls of Rakel’s lead vocals in “let’s make out”? Or was it the pure look of joy and love on all three faces of girls as they played and connected not only as a band but as best friends? Or perhaps it was when Rakel brought her grandmother on to the stage and called her a ‘bad bitch’? Whatever it was, Dream Wife are doing it right.

As a female listener specifically the band were totally inspiring as they frequently spoke out to all the women in the crowd encouraging them to scream louder, to be stronger and to fight back against the misogyny that is still present within the music industry. During their song “Somebody” Rakel bellowed the line “I am not a body, I am a somebody” with such ferocity that every man, woman and creature in the room was moshing with excited approval. Similar songs such as “F.U.U” rallied the audience together and all three girls insisted on every “bad” girl to make her way to the very front of the stage, which naturally we all did, so that they could come down off their platform to scream and dance with us all. Named after a 1953 Carey grant film the band are all about bringing down this notion of the perfect woman, tackling female issues with their fiery attitude and intense power chords it’s safe to say that Dream Wife don’t fit the traditional mould created for a girl band in our society.

The night progressed quickly and the harsh and subversive guitar leads combined with the harmonic and raspy backing vocals pushed everyone forward. You can always tell a successful gig by the amount of sweat in the room and all three girls (as well as the audience) were absolutely dripping in the sweat of a good time. Going out with a bang, Bella absolutely smashed it on bass and Alice’s rock star guitar moves were infectious. I left the gig feeling a little bit taller as an empowered woman, an inch of height given to me by the ferocity of the band. It’s a given that I’ll be attending the next Nottingham gig they put on and am more than happy to recommend Dream Wife to any young rock enthusiast looking to have a crazy time. Whether you’re a fan already or are just looking to go out and have a boogie, Dream wife will deliver.