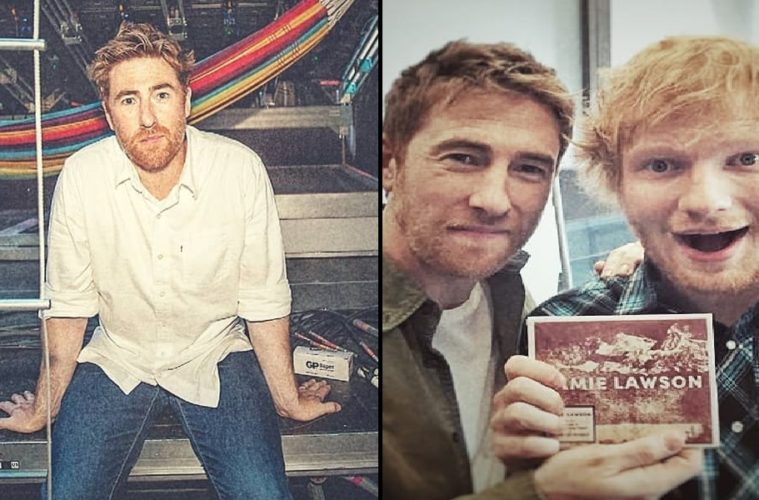 Jamie Lawson is a British singer-songwriter and musician, raised in Plymouth. He was the first artist to be signed by Ed Sheeran’s record label ‘Gingerbread Man Records’, and today marks the release of his new album The Years In Between. We caught up with Jamie before he starts touring to find out what he’s been up to.

Hi Jamie, thank you for speaking to us! What have you been up to recently?

I’ve been in Cornwall for a few days rehearsing with my band for the upcoming tour, doing a few promo things, live sessions, things like that.

Can you tell us a bit about the inspiration and message behind your album ‘The Years in Between’?

I guess the main message is about kindness and looking out for each other, which seems to be on the decline these days, especially on ‘unsocial’ media. The title song itself is about my Dad who passed away when I was 19. It’s about how I was introduced to music through his very small record collection and how that probably put me on the road to being a musician myself. He didn’t get to see any of the success I’ve had and I find that quite sad. Having said that it isn’t a downbeat record, overall it’s very much the opposite.

My new album is released everywhere today! I really hope you all enjoy it. Thanks for all your ongoing support, I really appreciate it. I proudly present: The Years In Between. Jx Buy/stream: https://ADA.lnk.to/TheYearsInBetween (link in bio) #TheYearsInBetween #OUTNOW #JamieLawson #ReleaseDay

Did you always know that you were going to be a singer?

I always wanted to do it, but early on I wasn’t sure it was a viable career option. I went to art college after school and specialised in photography. It was in doing that course that I became very depressed, I went to see the college counsellor and she asked me what I wanted to do and I replied immediately that I wanted to be a singer, and she said, well go and do that then. So I did. I quit college and moved to London and started playing the acoustic circuit. It took a lot longer than I expected but eventually I started getting somewhere.

You’re a songwriter too – do you prefer the performance side of being a musician or the creative aspect?

I love them both. Song writing is a need for me, not really a choice. If time passes without having written for a while I start to get panicky; it’s the same for performing too. For whatever reason I have a need to put my songs in front of people. I have no idea why, but to me, they’re very much intertwined.

We’re heading back out on a 22-date UK/EU tour from April 12th. Chances are we’ll be passing through your town. Join us if you like? Tickets at JamieLawsonMusic.com/live/ Jx #jamielawson #theyearsinbetween #concert #live #tour

What’s a piece of advice you have received during your career that you think is valuable to pass on?

Always be you. When Ed Sheeran signed me he said, “The best person to make a Jamie Lawson record is Jamie Lawson.” It sounds simple, but it’s harder than you think. It’s easy to get caught up and carried away making music you think  people want to hear and that the radio stations are more likely to play, rather than just making the music you really want to make. Hopefully, by keeping Ed’s advice in mind, I won’t ever stray too far from what’s really me.

You’re about to go touring for The Years In Between! What can people expect from your shows?

Songs from the new album The Years In Between and a collection of songs from the last two. I don’t know how much of a show it is, I’m certainly not someone who runs around a lot on stage, I’m a little bit calmer than that. I like to think I create a good and happy atmosphere though, a safe place where you can come and be yourself and immerse yourself in the music. That was always my favourite type of gig, something I could get lost in for an hour or two.

Do you ever get homesick when you’re travelling around for tours and gigs?

I miss my bed, but that’s mainly because I don’t sleep very well on the tour bus. I miss my wife too, but I’m quite lucky, she always comes out for bits of the tour, so it never goes too long without us seeing each other, which helps keep me sane.

When you have 5 minutes to yourself for a break, how do you spend it?

If it’s literally only 5 minutes I’ll make a cup of tea and take my go on scrabble. I’m always in a game with my brother or niece, it’s a good distraction to have.

Thanks for all your help with putting together this week’s playlist and a warm welcome to any new members of the Record Club. These are the tracks and the playlist link is in my stories. Enjoy! Jx #jamielawson #jamieawesomeorjamieboresome #jamiesrecordclub

What song is guaranteed to get you on the dance floor?

Higher and Higher by Jackie Wilson, it was the first dance at my wedding; we had a routine and everything and everyone joined in. It was amazing.

Have you ever faced a creative block? How did you overcome that?

I have two rules of thought on this: write as often as you can and just keep writing – it doesn’t matter if it’s good or bad just keep the cogs turning. That way when a good idea comes along you’re better equipped to jump on it and turn that idea into gold. However, the other rule of thinking (which bears equal merit) is to not force an idea until it’s ready. For some reason some ideas take longer than others; let them come to you. It’s a fine line to know when to push and when not to, that takes practise.

Also, I think it’s good to remember that listening to others, reading about others, watching documentaries about others can still be part of a creative process.  It’s amazing what might spark some inspiration. I wrote the song The Only Conclusion after watching an episode of The Big Bang Theory!

What would you say to struggling artists who are losing/have lost the motivation to carry on creating music because the industry is so competitive?

If there’s something else you think you could do that would give you as much joy, you should probably go and do that. The chances are you’ll make more money and be happier in the long run.  But, if the act of creating, singing, playing… whatever it is…  still feels like the only thing you can do and the only thing that will make you happy… then you’ll know that you’ve got to keep at it. You could be the one who writes something that will change someone’s life. Be brave.

What’s next for you after touring The Years In Between?

I’m not sure actually. It’s been a crazy five years and I’m probably ready for a slight gear change.

I’ve been itching to make an acoustic album, less instrumentation and more intimate which would be nice to tour on a smaller scale. But I think I’ll take a little time out before I start that. Maybe travel for a month or so, go somewhere and breathe out. It’s a competitive industry and not always a kind one. I’ve been very lucky, literally all my dreams have come true musically. The aim for the future is to keep going, keep writing, keep singing and keep making a living and hope that my fans stay with me – they always seem like such nice people.

Listening back in the red room. Jx

You can buy and stream Jamie’s new album ‘The Years in Between’ here.