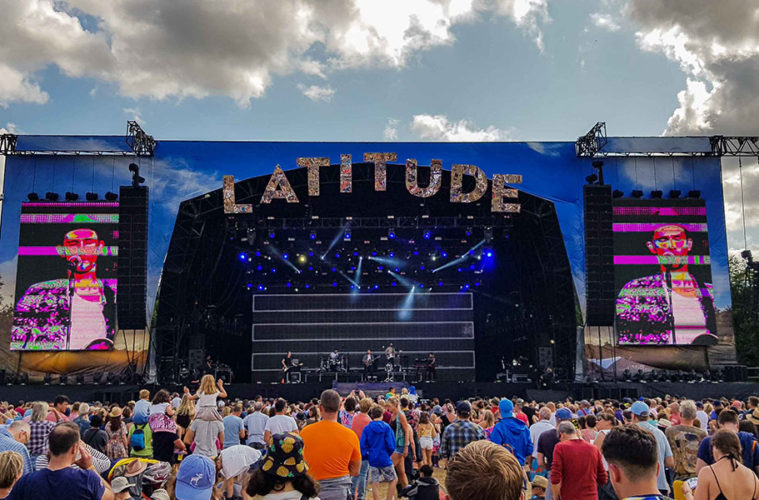 I’ve been to the wonderful  Latitude Festival five of the last six years, and so far been extremely lucky with glorious sunshine being the usual weather, with just a slight downpour a few years ago spoiling the run.

However, Friday this year had already seen heavy rain and a mud bath looked very possible. As we sat in the annual traffic jam approaching the site around 1pm on the Saturday, thunder boomed and more rain was lashing down. I was happy my beautiful girlfriend Helen and I were only day tripping this year, and that we had remembered waterproof hiking boots.

Happily as we parked the skies cleared and the sun appeared. This boded well, although we packed waterproofs to keep the fickle festival Gods appeased, who had after all unleashed their fury upon Download earlier this year turning it into a swamp, but also bestowed a heat wave upon Glastonbury.  It could still go either way today.

As usual the organisation at Latitude Festival was flawless and we breezed through security after a quick bag check, passing by the glamping, VIP and normal camp sites, all typically well behaved, with rubbish filling a variety of Waitrose and M&S Foodhall bags. The walk is about ten minutes, then you’re through the woods and the fantastic festival site is spread before you.

Consulting the very decent Latitude Festival phone app we decided our first stop was for Nadine Shah on the BBC Sounds Stage, the second largest across the site. As always the sound in the vast tent was fantastic and Nadine played a decent set. Between songs she rallied against Trump, and the current right wing state of UK politics, whilst urging us to continue caring for our important immigrant population. Liberal to left wing politics is very much the way Latitude Festival swings.

We then wandered over to the Obelisk Arena to see our first main stage act of the weekend, ‘Walking on Cars’. They were new to me, and I quite liked them. A typically easy going afternoon band to sit down and enjoy a cider with. There’s always a big mix of ages here, and plenty of picnic blankets where families with children have claimed their space for the day. I’d say 1 in 4 people have kids with as the festival encourages them with a huge area at the other end of the festival site dedicated to kids of all ages. There is entertainment of all kinds to keep them happy.

Next stop was for a coffee with some friends who also had their son in tow. One of my favourite things about Latitude Festival is the amazing array of food and drink vendors. Not only is the choice seemingly endless, they tend to invite the highest quality vendors. There are hundreds of picnic benches to choose from too, but I would advise bringing your picnic blanket as this part of the site is the busiest my miles. And there are big queues to deal with for the popular stalls. If you’re just drinking, consider the concierge service, who will deliver to you, for a fee.

Next up was the Comedy Arena, and the most pleasant surprise of the weekend; finally they have ditched the old enclosed, cramped tent and replaced it with a new open ended tent, meaning everybody can now get a good view of the comedian! The last couple of years I’ve not even bothered with the comedy due to the cramped space. The main acts always attracted uncomfortably large crowds, leading to a sweat pit in the tent. Great to see this remedied as the comedy line ups are world class every year. This years Saturday headliner was the affable Jason Manford, preceded by the always brilliant Katherine Ryan, Nick Helm, Felicity Ward and Mark Watson, amongst others.

If you’re not too bothered about the main stages, just wandering about the site is a joy in itself. There’s so much to see and do, especially in the woodland. There are theatres, smaller music stages, graffiti artists, DJ workshops and chill out zones. You could easily spend the whole day checking it all out. Especially as there are a couple of bars dotted amongst the trees. But the main attraction in the woods is the Sunset Arena, the third largest stage. Here you will find the more specialist bands and singers, and to be honest this is the stage where, over the years, I have enjoyed the best music. This years highlight was ‘Steam Down’, a London based collective of musicians described on their website as an ‘extended musical family generating spontaneous sonic soundscapes and grooves reflecting their lives in the city’. It was a brilliant mix of musical genres, with some nice crowd interaction.

The only repeated gripe from various people over the weekend, was the overall annual reduction of quality in the main and second stage line ups. To be fair, I’d agree to a certain extent, especially comparing 2013’s line up to 2019’s, but the artists who play these two stages are still world class, and totally suit the clientele. This year saw George Ezra headline the Friday and Lana Del Ray the Sunday. Stereophonics replaced Snow Patrol on the Saturday. I’d say they are the bookings of a team who very much understand their customers, who continue to pretty much sell out the festival year on year.

A few remaining performances of the day stand out; Aurora on the BBC Sounds Stage was once again eccentrically brilliant. Her voice is utterly phenomenal and it was great to see her return. Everything Everything later just blew us away with a performance that may have made my all time Latitude top ten.  They sounded excellent and were complimented by some of the best lighting I’ve ever experienced. Then we caught the final thirty minutes of Underworld on the Main Stage, who as always were mesmerising. Their closing track was all time electronic anthem ‘Born Slippy’, which was obviously awesome. Also props to Tom Grennan who stuck around after his main stage appearance to play a secret set on the BBC Introducing Stage in the woods. Quite a cool thing for Helen and I to stumble upon, quite by accident.

In summary, Latitude Festival delivered yet again. It is a fully mature fixture on the national festival scene, with professional standard organisation delivering world class entertainment. It’s a family friendly festival of the arts, aimed squarely at the liberal middle class crowds, hosted on beautiful parkland. The line ups are not cutting edge, and generally don’t include any urban or underground music, but there is something for almost everyone at this remarkable event.