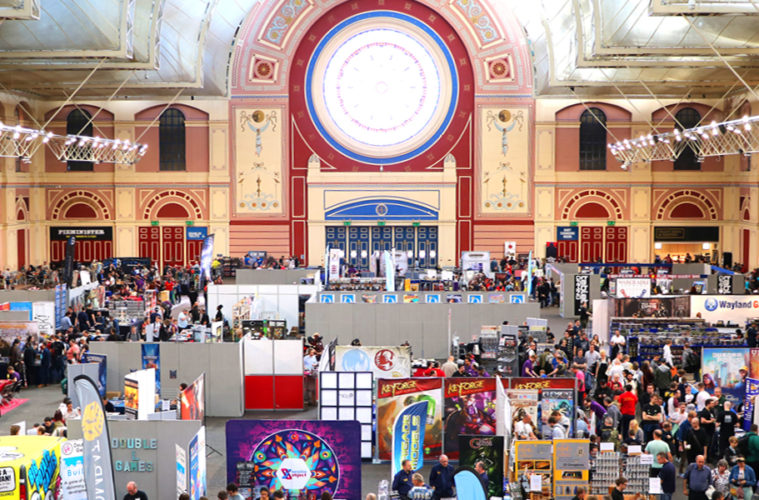 Ever wanted to make your own game? Well, here’s your chance to learn from the best! Tabletop Gaming Live is back in London’s Alexandra Palace this September 28th and 29th, bringing a weekend full of the year’s biggest games and their creators to one place.

Leading two days full of talks from the creators of games such as King of Tokyo, Hellboy: The Board Game and Escape the Dark Castle will be Ian Livingstone, the co-founder of legendary British game maker Games Workshop and co-creator of Warhammer and Warhammer 40,000.

Ian will chat about his life in games, the origins of Games Workshop, Warhammer and the Fighting Fantasy book series, and even run through his favourite games of all time. Afterwards, he’ll be meeting fans and signing copies of his books – so you’ll be able to meet a true icon of gaming in person.

As well as talks, Tabletop Gaming Live will have a workshop zone with interactive sessions for visitors. Whether you’re looking to brush up on your miniatures painting skills, show off your talent in a speed painting competition or learn the basics of making your very own board game from a veteran designer, you’ll be able to get involved and pick up some valuable tips. Plus, stick around on the Saturday of the show to take part in a very special gaming-themed pub quiz, with loads of laughs and some amazing prizes up for grabs.

If you’re itching to challenge your gaming skills, why not enter one of the tournaments happening during Tabletop Gaming Live, including a regional qualifier for the Survival team version of co-op hit Pandemic, a national qualifier for classic Catan and the UK’s only major qualifier for the Dragon Ball Super Card Game. You’ll bag some goodies just for taking part, nab some exclusive prizes if you win and might even get the chance to advance and compete to prove you’re the very best player the UK has to offer.

This is all in addition to the countless games that will be on the show floor, highlighting the biggest and best releases of 2019 – and giving you your chance to play some of the hottest games before they’re released.

Among the games you’ll be able to play will be the brand new Dune – the first time the ‘lost’ sci-fi masterpiece has been widely available for 35 years! – the new game from Kingdomino creator Bruno Catahala, Ishtar: Gardens of Babylon; the newest expansion for Disney game Villainous, Evil Comes Prepared, which features The Lion King’s Scar; and the latest games in the massively popular KeyForge, Ticket to Ride, Pandemic and Love Letter series!

Tickets for Tabletop Gaming Live 2019 are on sale now via the ttgami.ng/ticketfactory19 – buy yours before the day and you’ll get in an hour early, giving you even more time to play. Family bundles and weekend passes are also available, with kids under 10 free to attend.

Don’t miss out – come to Tabletop Gaming Live on September 28th and 29th 2019 in Alexandra Palace, London and see the very best that gaming has to offer. Find out more at ttgami.ng/ttgl19