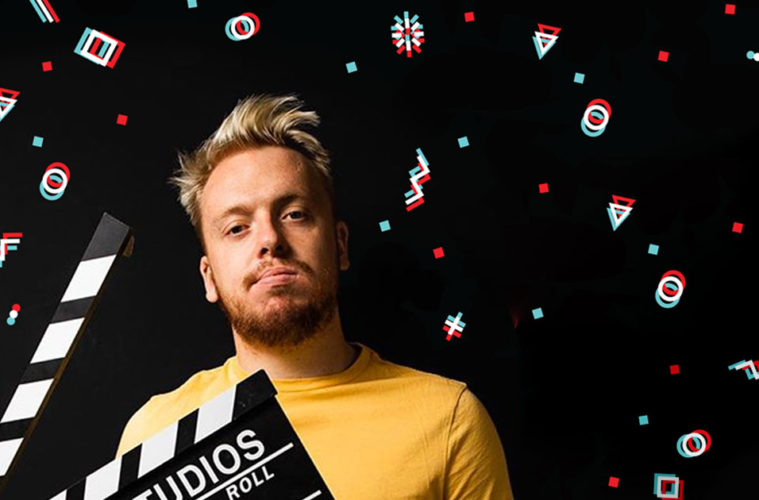 Hi JaackMaate, tell us a bit more about yourself and your YouTube channel.

I live in a shed and I just make weekly content; I do podcasts, I do celebrity interviews – mainly I just moan about things and other YouTubers. I’ve been doing it for about 10 years now!

It’s gone quite well, hasn’t it?
It’s gone alright! A million subscribers – haven’t got my plaque yet though, still waiting for that. YouTubers get a “1 million” plaque when they hit it. But it’s gone really well! It was only once I did a video about a certain YouTuber’s advent calendar that it boomed. I sort of – and I wish I could say this word – plateaued? For seven years it sort of plateaued and stayed at around about 100K. Then I did that video and boom; I’m still riding that wave. It could be all over tomorrow, but I’ll take it!

A million subscribers on the JaackMaate channel! How does it actually feel to be on that level, because you built that from nothing?
It’s mental because that was always my goal. There’s literally no way to say this without coming across as very arrogant, right? But, I said to my cousin when I started, “I will hit a million.” I don’t know if that’s from arrogance or just confidence. As I said, when I was on that same number for such a long time, there was a little bit of doubt that started creeping into my mind… “You’ve been doing it for seven years and you’ve only hit 100K. Do the maths: are you still going to be doing this when you’re 80?” But like I said, that video blew up and we got there. It was weird actually hitting the million because I didn’t know where to go from there. I thought, “Oh, my next video has got to be this massive banger!” and that kind of made me a bit lazy because I thought “Well, I’ve hit it now.”

I think it says a lot about the whole social sphere in general, because actually if you don’t have a goal to shoot towards, you’re just aimlessly publishing content with nothing to try and grab. So kudos to you for having a goal in the first place.
I always say to up-and-coming YouTubers who want my advice – as if I can offer it. It’s all about little wins. So, it’s good to have that million goal there, but it’s good to think, “Right, I’m going to aim for 20K, and when I get to 20 I’m going for 50, then I’m going 100.” You’re still getting those wins, those little dopamine rushes. If your goal is so far out there, you might feel like you’re not getting on the first level of that ladder.

Let’s talk about YouTube as a platform. What’s so powerful about it?
Where to start… it’s crazy, isn’t it? Just how big it is now? I think the fact that a woman can put a cat in a bin and get 10 million views shows you the power of it. It gives everyone a voice, really. How lucky you get depends on how loud that voice is, I guess. Luck is a big element. It’s giving anyone the power to have a voice and to have an audience, because if we go back 20 years, how would I, in a shed, get an audience? Unless I get to put on prime-time BBC One – which would not happen! I’m in a shed… it wouldn’t make sense.

In your very humble opinion, what are the key pillars of an excellent video for YouTube?
That’s another hard question because I think YouTube is so diverse that certain things can work for certain content creators which may not work for others. I’ll tell you something which is the same across the board, and that is the way the video looks when it’s on the homepage. So, the thumbnail, the keywords, the title, all that obvious stuff. There are actually websites now that you can go on, where you put the title of what you’re thinking of calling your video, and it’ll come up with the best 50 tags based on that. For me and I think for a lot of other YouTubers who have “made it”, for lack of a better phrase, it doesn’t matter what kind of quality the video is. So, as long as you’re not filming on a potato, you’re alright! I film little point and shoots, I’ve got my box lights. If it films, it does the job. I don’t use a mic. I don’t use any of that. It’s more about what you’re saying. Is the content funny? Are people getting from the content that you’re trying to give out? It doesn’t matter if it’s a high-end piece of content. If it were, they’d go watch it in the cinema or on TV or something like that.

A massive thing for people starting on YouTube is the views. People are obsessed with the views. Obviously, your view count is astronomical, compared to the average YouTuber. What is it that gets you that many views on the JaackMaate channel?
For me, I think it’s always about finding a niche. Even if you are going to play the game and go on trends, make it your own and make it niche. Give someone a reason to want to watch you above the 500 other people who are doing similar content. Now with me – this sounds mental – my niche is just honesty, right? I went to a lot of YouTube meet and greets, I’ve met a lot of “big YouTubers”, and I didn’t really like who they were. I thought on camera, they come across very family-friendly – chubby bunny challenge and all this. When you meet them, a lot of them are not very nice people. I don’t want to cause any controversy, but they’re not very nice people. I like to think I’m a nice guy – not blowing my own trumpet. I can’t, I’ve tried. I think because I’m very honest about stuff, I’m not afraid to call out the bigger guys. A lot of the younger audience have started to realise the same stuff about certain people in the community; they come to me for all that honesty. I think the moment I really started to not hold back on anything and go big on the honesty, that’s when people began to really relate with it.

So, honesty, and pick a niche?
Niche, definitely. You can play the trends! You need to play the trends if there’s a big talking point that everyone’s talking about. Of course, jump on it, because that’s what everyone wants to hear. Find a quirky way of doing it. Don’t just be a sheep.

Your JaackMaate channel gets deleted today. You have to start again. Would you do anything differently?
Yeah, I would. As I said before, I call other YouTubers out for things – that’s kind of my niche. I spent a big proportion of my beginning, sort of three or four years, not wanting to say anything about those guys, because I saw them as a stepping stone of where I need to go. I would often ignore the bad stuff they were doing. If I were to restart I would just think, “Don’t worry about it, mate. Say what you want to say – if people disagree with you, who cares?” Look at Piers Morgan: people disagree with him, but he’s still getting the views, the traction, and earning a lot of money. Another thing I’d say is always, always, always make people feel. Don’t make them come to your video and click off because it’s nothing. If they hate you, they hate you. They still might even share your content if they don’t like who you are. Look at Arsenal Fan TV. It creates a discussion. The worst thing is not being hated, it’s not being cared about. You are always going to annoy someone for something so just be honest about it. Some of the best brand deals I’ve ever done are when companies have come to me and said, “Promote this product.” and I’ve gone, “Can I joke about the money you’re paying me? Can I joke about your product as well?” and they’ve said yeah. Then you feel more real and then they see a bigger return because I’m being more honest about the product. Rather than going, “Look at this, this is the best mouse-pad I’ve ever had in my life!”