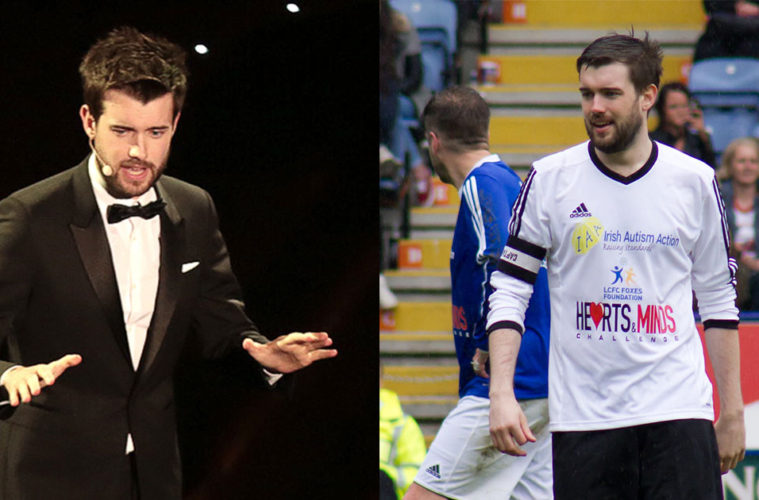 We caught up with Jack Whitehall in Belfast to discuss his Stood Up tour, which was officially the UK’s biggest comedy tour of 2019! Jack reveals which Premier League player he would compare himself to, which crowd gave him the most banter, his favourite place him and his father have travelled to, the most embarrassing thing his father has ever done, and the strangest thing he has ever eaten. Jack also reminisces about his time at university and filming Fresh Meat, as well as sharing his best piece of advice for students who are aspiring comedians.

Hi Jack Whitehall! How are you?
Good, thank you. Just arrived in Belfast.

I understand you’re playing five a side today with some mates. Which Premier League player would you compare yourself to?
I think probably Nicklas Bendtner. I have occasional moments of ability, but quite a lot of hamming it over the bar. But very rock solid belief in my own ability. That would be the player who I liken myself to the most.

How has your ‘Stood Up’ tour been going so far?
Yeah, very good. I’ve been on the road now for a couple of months and the audiences have been great. I love being out on the road and having that connection with the live audience. It’s so good and it’s such an exciting and adrenaline fuelled experience. It’s really nice to be back doing stand-up.

Which crowd has been giving you the most banter?
Had some really good nights in Dublin. It’s always a really feisty crowd, even on like a Tuesday or Wednesday night they were so up for it. I love playing there, they’ve been great.

Where’s your favourite place you’ve travelled to with your father and why?
I loved going to Cambodia, I thought that was a really special place. It’s obviously a place that has quite a dark history, but it’s got people that have this amazing spirit and they have a kind of survivor mentality. They’ve made the best of a very bad situation. It’s the most incredible country to visit; I really enjoyed being in Cambodia.

What’s the most embarrassing thing your father has ever done?
I think he once got banished from the touch line at one of my school rugby games when we were playing a game in Wales because he made some reference about sheep which was deemed inappropriate for 16 year old boys, so that was quite embarrassing.

What are your thoughts on the result of the UK general election?
Oh god, yeah. It’s funny because in my act I don’t really talk about politics because it’s like “anyone wants to hear my opinion on it?” so I tend to stick to dick jokes.

Are you a fan of the Donald?
[Laughs] No, not particularly.

Could you tell us about your time studying History of Art at the University of Manchester?
I was there for about five minutes doing an art history course, and I had an amazing time living in Manchester, but I didn’t do very well in terms of actual study. Although I do always love going back there because I have a fondness for the city. Also I never use any of my knowledge of history of art in my stand-up, because I never thought that it would be of any use and there would be any crossover. But then I saw that special by Hannah Gadsby ‘Nanette’ which is incredible and also draws a huge amount on her history degree, so I felt even more inadequate that I had been unable to transfer any of my art history knowledge into my profession.

What led you to choose that course in the first place?
[Laughs] I literally had no interest. Well, no – I liked art, but I just wanted to get to university and just do something. I was doing stand-up already so I kind of knew I was doing what I wanted to do, and just wanted to be up in Manchester hanging out with my friends and going off and doing gigs.

Was your time as a student anything like Fresh Meat?
[Laughs] Yeah, a little bit. My house was definitely like the house in Fresh Meat. There were many things that were skankier, so that was a very weird experience to do that and then go back to Manchester for filming the show. It was a bit like going back to university in a way and seeing all my old halls, but we were there filming it instead of, you know, drinking.

What’s the best piece of advice would you give to students who are aspiring comedians/actors?
I think just stage time is the most important thing, as well as resilience – making sure that you don’t let bad gigs get you down, and you keep plowing away and working hard. You’ve got to just keep writing, keep churning over material, keep honing it and refining it and trying to find your comic voice. The only way you can really do that is by spending time on stage, which is hard to do. So many people are trying to do it now, but not doing that many gigs, but that’s really the only way. There’s no shortcut, you have to get the stage time. And then Edinburgh as well I think is an incredible place. That’s where I started, that’s where most comedians start their comedy careers, so I always encourage people to go out to Edinburgh to see stuff. It’s a really great breeding ground for comedy.

Do you ever suffer from nerves before your shows?
Do you know what, only when you’re going somewhere you’re not used to being in. Weirdly in Dublin I always get a bit worried about saying the wrong reference or accidentally referring to them as British or something of that nature. There’s this famous story about Chris Rock doing a gig in Dublin and he started doing a routine about how they have the Queen on the money, and someone heckled that it’s the Republic of Ireland and got a massive round of applause. That’s always at the back of my head when I step on stage, not to have a Queen on the back of the money Chris Rock moment.

Yeah, that’s as bad as it can get.
Well it would probably be even worse if it came from a posh English man.

In the event of a zombie apocalypse, what would be your plan of action?
I think I’d probably just get bitten quite quickly, deliberately. I’m not going to be a survivor. I have contact lenses (I’m very blind), so the minute they run out I’m dead… I do think about that quite a lot, that I’m too blind to survive an apocalypse. The minute my contact lenses ran out I’d just be dead.

What’s the strangest thing you’ve ever eaten?
I’ve eaten rat in Cambodia. Barbeque rat, that was pretty gross. They said it tasted like chicken which is a real disservice to chicken. It does not taste anything like chicken. It tastes exactly as you’d expect rat to taste.

Jack Whitehall will be bringing Stood Up to Australia and New Zealand in February 2020. View World Tour dates.