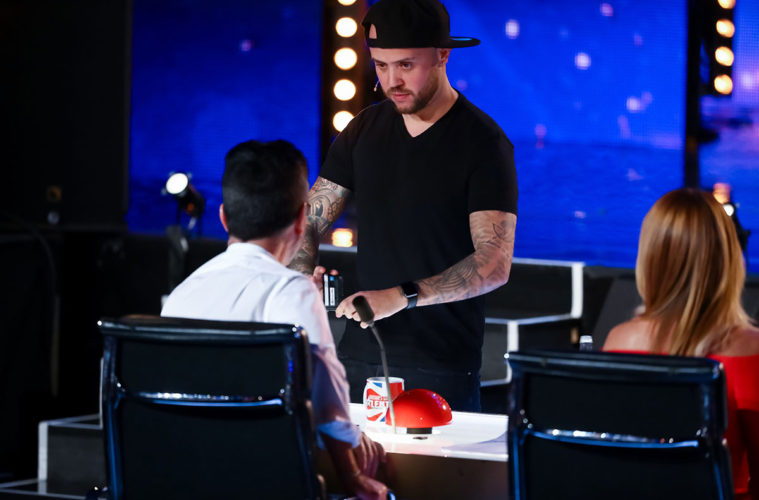 Damien O’Brien has been a magician since he was just 13 years old, looking up to the likes of David Blaine as a creative role model. Since then, he’s come a long way, recently winning over the nation as he wowed the judges (and audience) in his Britain’s Got Talent live act. We caught up with the talented illusionist, ahead of his semi-final performance due to be aired on ITV tomorrow, to discuss all things magic, his career, favourite tricks and what it would feel like to win BGT…

How old were you when you performed your first magic/card trick in public?
I got into magic when I was 13. There was a guy who lived opposite me at the time who was doing magic and it was the stuff you was seeing David Blaine do on the TV. I loved watching the others kids reactions to the tricks, so I bugged him until he taught me a trick. I then spent 3 months perfecting that trick creating different routines with it. The trick was: a spectator would sign a card, place it into the middle of the deck and a rubber band would be placed over the deck. I would then throw the deck at the ceiling and their chosen card would be stuck to the ceiling.

Wow sounds brilliant! What or who inspires you, and your work…
David Blaine has always been and continues to inspire me. He changed the game for magic and paved a path for a lot of magicians. I also just really enjoy his work, he’s so creative and just always finds a new way to amaze the world.

What is the magic industry like from a business perspective – is it competitive/endless hours… can you give us an insight into the world of an illusionist?
The industry is not that big. There are a lot of magicians but we’re all so different from each other. There’s a lot of magicians who just create tricks and don’t go out and perform, some just do lectures for magic clubs all over the world, some are performers and are out each week performing at events. But its a tough job to do full-time, that’s why I was in a day job to make sure there was always a guaranteed income, but I feel like now is the right time to commit a go full-time with the magic.

Is it tricky to juggle having your job as a personal trainer with your passion for magic – how much time do you spend practicing your magic tricks?
It can be tricky to juggle both as some days I’m up at 4:30am to be at work for 5:30am so if I’ve done a gig the night before, it can be very tiering and can also make it hard to find time to learn new things.

How do you come up with new ideas for your magic?
I try think of the things I’d like to see and something that just seems impossible, then try to find ways to make it work. If I’m working say on a campaign for a drinks company it’s a bit easier, as your focus is just on that product, so I’ll sit with friends and try to come up with as many tricks as we can.

In your opinion, what is the greatest magic trick of all time?
That’s a tough one as there are so many amazing tricks out there but one of my favourites is still when Teller (Penn & Teller), turns a bunch of coins into hundreds of goldfish. 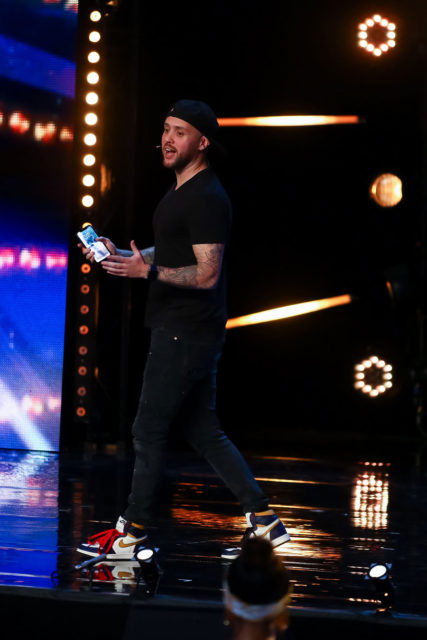 In your incredible live performance on Britain’s Got Talent, you asked the judges to choose a specific date and time that means something to them. What is a specific date and time which stands out to you as a highlight from your career?
I would say my audition really stands out to me as a significant point of my life, as I said two years ago at that exact time I was at a low point of my life, then 2 years later I’m on the biggest stage being cheered by over 2,000 people. The whole day all I could think about was how far I have come, and now to be getting 4 yeses and advancing to the semi-finals is without doubt a big achievement for me.

Not only did you get a standing ovation but you also got amazing feedback from all the judges, including Simon, who said you are “unbelievably talented”. What were your expectations before that performance – did you ever imagine getting such amazing feedback and wowing everybody?
Never in a million years did I think I would get that reaction and feedback. I honestly thought before going on stage I’d get comments like “that’s cool, we ain’t seen a trick like that before”, but I never expected a standing ovation and so much positive feedback.

There are quite a few magicians in the show this year, is this making you work even harder?
Magic is very popular on Britain’s Got Talent but again we’re so different, I just focus on me, I can’t control what the others do. I just try to give people the best version of Damien O’Brien and hope they like it. As long as I give my everything I’ll be happy.

Your socials are going crazy, are you getting lots of messages from new fans?
Yeah, it took me over a week and half to read all of the messages on Instagram after my first performance.

Wow! Are you able to give us any insight into what to expect for your semi-final performance which is being aired this Saturday?
All I can tell you is that my semi final performance continues from where I left off at my audition.

Exciting, we can’t wait to see your next performance, you’ll certainly be getting our votes! And we will be using all 5 votes per device to help get behind you. What would it mean to you, to win this year’s Britain’s Got Talent and perform at the Royal Variety show in front of the Queen?
It would mean everything to win BGT to perform on such a big stage at the royal variety would feel incredible. I just hope the public will get behind me and vote.

Get behind Damien O’Brien and vote for him this Saturday night – the show starts at 8pm!