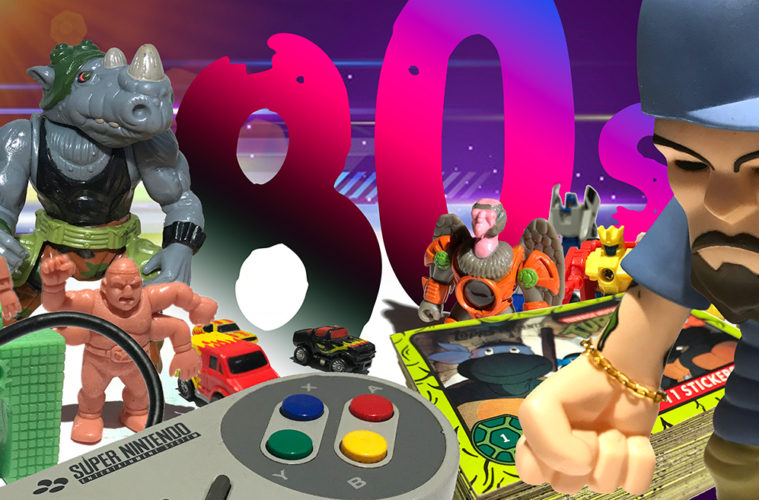 Vintage 80s toys can fetch huge sums of money, and not just hundreds of pounds, but multiple thousands if you have the rare and highly sought-after items!

If you’re a mature student, or have an older brother or sister who grew up in the 80s, check if you/they still own any of their childhood toys or cards stashed away in the attic. This might be a golden ticket opportunity. So, let’s dive straight into a selection of toy ranges, the rare items and their value!…

Hasbro created G.I. Joe, the world’s first action figure way back in 1964. An instant hit with boys around the world saw the toy-line develop over the years. In 1982 G.I. Joe came out in a new range of elite military figures defending freedom against the evil Cobra organisation. Figures from these two-sided fighters were released over the years with G.I. Joe sub-teams, one of which being called Tiger Force. Certain Tiger Force and other rare figures can sell for £200-£500. The closer the figure is to its original state adds value. So, if boxed and sealed will be of highest in value as this makes them even harder to find. But other factors including the paint condition, the stiffness of the joints, overall condition and if the G.I. Joe figures are “complete” (include all the original accessories) are all massive factors on the sale price of these vintage 80s toys. Also, don’t fret if your figure legs are no longer attached to its upper body. They are held together by rubber bands so it’s common these snap due to age. Bands can be purchased easily to fix your G.I. Joe. Check out YoJoe for a full list of figures and accessories across all years, it’s a great site to help you identify each G.I. Joe figure and it’s best to do this year-by-year. 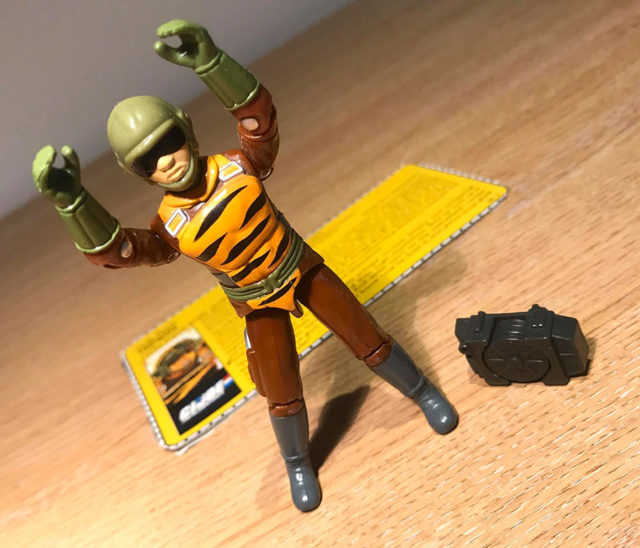 Playmates toys were the main producer of the brightly coloured and imaginative TMNT figure series which began in 1988. Their original line simply named Teenage Mutant Ninja Turtles ran until 1997 and as the years went on, more and more figures were released with a few sub-lines (some based on the films rather than the cartoon show). In 1988, 10 figures were released, including the 4 famous ninja turtles; Donatello, Leonardo, Michaelangelo and Raphael, as well as a selection of enemies including Shredder and Foot Solider. Each year more mutant-like, star-throwing and sewer-living figures (as well as new characters and adaptions of the ninja turtles) were released. Figures range in price value, again always dependent upon condition and accessories but typically fetch around £10-£30 per figure. Check out Turtlepedia for full lists all the vintage 80s toy figures released. 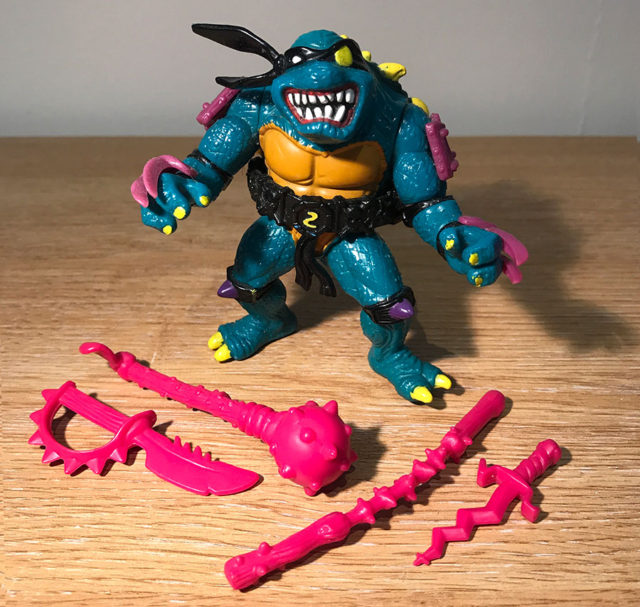 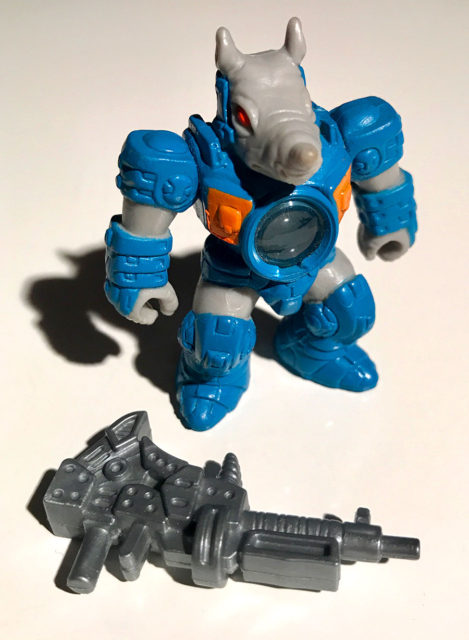 Battle beasts are one of my favourite toy-lines from the 80s are these tiny anthropomorphised animal figures with body armour, a unique weapon and a heat sensitive sticker, which when rubbed, reveals the warrior’s strength. The Battle Beasts symbols are either fire, wood or water and could be used in a rock, paper, scissors type game—fire beats wood, wood beats water, water beats fire. Later a fourth and extremely rare emblem was added, the Sunburst, and it would beat all the other Battle Beasts strength types. After the Battle Beasts came the Laser Beasts – a series of 36 figures, (individually numbered on their feet) along with their weapons which were designed with the animal character similarities. Rather than the Battle Beasts heat sensitive sticker, these new Laser Beasts featured an “Orb”, a circle in the chest of the figure you looked through to see their hidden strength. A truly remarkable and creative range of figures which now easily sell for £20+ per figure with weapon. The rarest of these Battle Beasts or Laser Beasts figures can sell for hundreds of pounds but be careful not to twist the arms if they are stuck as they will break and the figure then loses its value!

These little guys have a huge back story, which originated in Japan in 1979 when Yudetamago, the pen name of creative duo Takashi Shimada (writer) and Yoshinori Nakai (artist) introduced the figures as a toy-line for Kinnikuman. Later on, in the mid 80s, toy company Mattel rebranded their own line of kinkeshi toys entitled M.U.S.C.L.E (Millions of Unusual Small Creatures Lurking Everywhere). What started as a parody of comic book superheroes became a comic-style wrestling story. Using the same moulds and flesh-colour, they were released in a variety of retail-friendly packaging options. Later the same figures were released in multiple colours including red, orange, salmon, green, light blue, dark blue, magenta, and purple. You can identify if your M.U.S.C.L.E figures are genuine by the Y/S*N*T stamp on their back. This embossed mark is actually a copyright code for Kinnikuman that stands for:

Y = Yudetamago, the manga team behind Kinnikuman
S = Shueisha, the manga publishing company
N = NTV, the network that broadcast the anime series
T = Toei, the animation company behind the anime 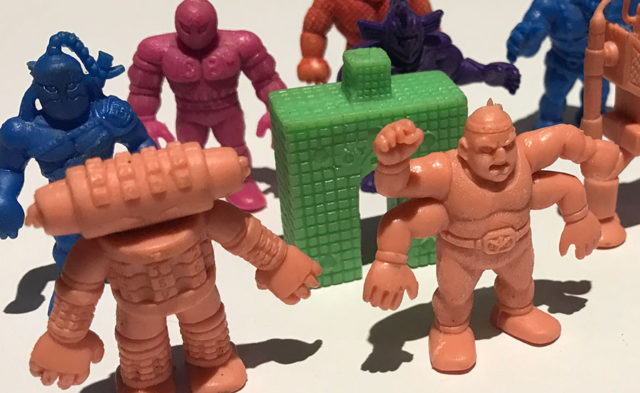 If you do manage to own any of these tiny and assorted coloured figures keep a close eye out to see if you have #153, The Claw, or #236 Satan Cross. Satan Cross was the first non-poster M.U.S.C.L.E. discovered and The Claw came in 8 of the 10 available colours, but the purple version is one of the most valuable “standard” 236 figures available due to its scarcity, and will sell for hundreds of pounds. 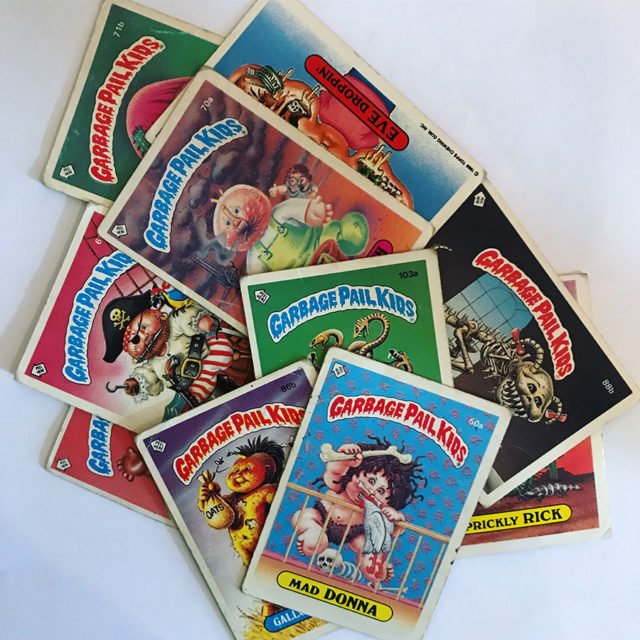 These can go for mega money. But before you get your hopes up it’s the American cards which hold the massive valuations. A USA full series box might sell for around $20k! There is a selection of really valuable standalone cards from series 1, such as 1a – Nasty Nick, and 8a – Adam Bomb. The USA version might land you £1,500 whereas the UK version of the same card might be £20. The card designs are identical but the USA versions are slightly bigger. A one series UK pack will sell for about £20, whereas a one series USA pack will sell for around £300, so a big difference. Trading card valuations vary and increase for pack-fresh, good condition cards – no rounded corners, in white pristine condition cards sell for the highest price. Condition is everything. Lots of different trading cards sell for high values so if you do get lucky with any vintage 80s toys or cards, make sure to do your research before selling any as you might have a gem which on its own is worth more than the rest!

If you are considering selling any vintage 80s toys or trading cards, here’s a few tips to consider…

Don’t be fooled by an eBay buy it now price – search eBay sold items for a rough, fair value guide.

Bundles or “job lot” sales sell for a lot less value so if you have the time, sell your figures/cards individually for highest amount.

Join Facebook groups dedicated to the vintage 80s toys you are selling. There are tonnes about and even if the group doesn’t have many members, they will be the perfect demographic to target so the interest levels in your items will be high. here’s a few groups that will get you started:

Remember to read the individual Facebook group rules – they are taken very seriously! Some require you to write your name and price in the picture of sale items. There is no “backdoor dealing” allowed in some groups – this means all negotiations must be public comments. People write “claim” to… claim the item – once an item is “claimed” it is sold to that person. You then arrange payment (usually via PayPal), and shipping via PM. If you are prepared to ship globally you have a larger number of relevant groups to join, and obviously more potential customers as many of these toys are collectable worldwide.

If you have quite a few items to sell it’s easy to find yourself in a muddle, so spend the time before you start to sell your items by creating an organised spreadsheet. Identify what you have, how much each item is, give each item a unique reference number, and place a total amount figure along with the contact details of the person who “claims” an item. Keep your receipts and mark items on your spreadsheet as sold. This will help you keep organised because trust me, when you start communicating with multiple people for different items you will get lost. It’s also good practice to communicate with your buyers and send pictures of the parcel before sending it and the tracking number once posted.

There are far too many retro toy ranges to cover in this blog, and the ones featured above are lines I had as a kid. But there are so many valuable vintage 80s toys which sell for big money and are collectable including the obvious ranges such as Star Wars, Transformers, Thunder Cats, Micro Machines, Dungeons and Dragons, Mad Balls, Boglins, The Simpsons plus loads of trading card collections.

What are your favourite vintage 80s toys? Do the small and mighty Battle Beasts take the top spot, or are you more of a turtle sewer fanatic or maybe you enjoy a toy-line not mentioned in this article?

I hope this article brings back some nostalgia. If you are lucky enough to own any rare vintage 80s toys and decide to sell – good luck! I hope you find some value in those dusty boxes stashed away in your parents’ house!