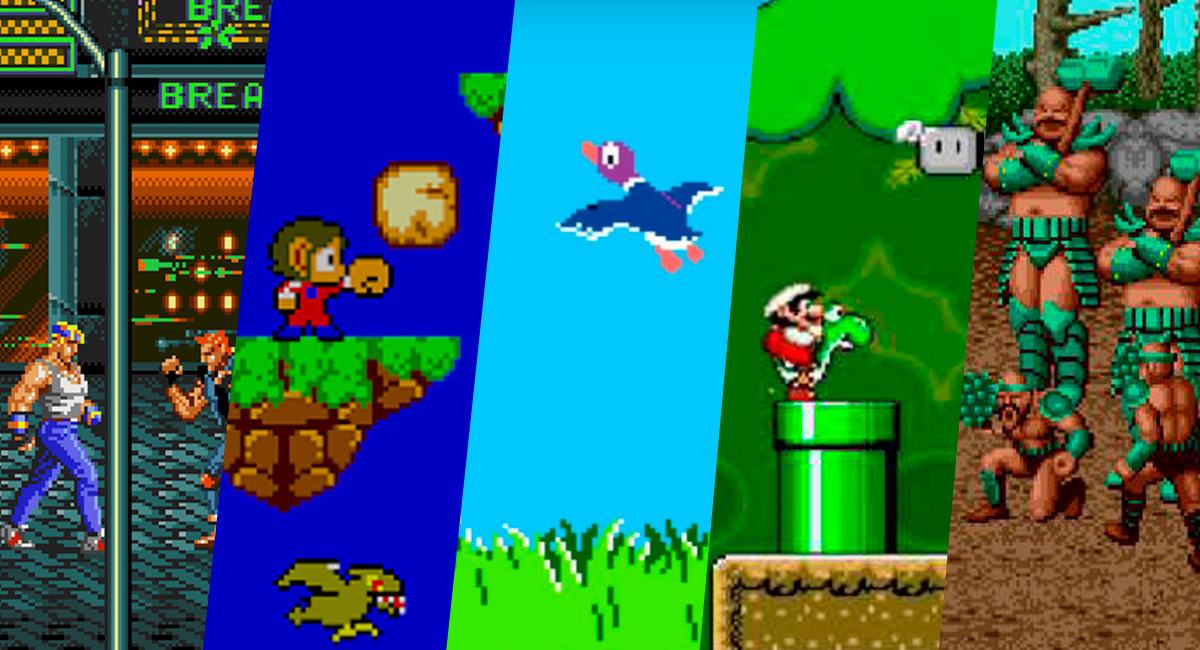 As Christmas approaches and some people get lucky this year by landing themselves a new PS5, we thought we’d take a trip down memory lane and select our top 10 best retro games, helping those that aren’t so lucky, feel better (well a bit)…

Our first inclusion in our best retro games list was released way back in 1989, Golden Axe was a SEGA classic! Set in the medieval fantasy world where several heroes set out to recover the legendary Golden Axe. Choosing one of three warriors, you fought gnarly enemy characters hurting them with your special potion and powers. This series of side-scrolling beat ‘em up arcade games was released by SEGA – Makoto Uchida was the primary developer of the game, who was also responsible for the creation of Altered Beast.

First released in 1991, Streets of Rage is part of a series of 4 beat ‘em up games, and has lasted the test of time with Streets of Rage 4, last being released in April 2020! The trilogy had all been developed and released by 1994, with the first entry seeing four main characters who as the game title suggests, walking the streets in rage fighting villain enemies. It was a huge hit and supported by SEGA Mega Drive, Master System and Game Gear consoles.

Fictional character Alex Kidd peaked in popularity during 1986, becoming mascot and overtaking “Opa-Opa” from Fantasy Zone. The creation of Alex Kidd was an attempt to rival Nintendo’s flagship character Mario. And in 1991 SEGA introduced Sonic the Hedgehog so by this time Alex Kidd was nowhere to be seen. Well, that’s not exactly true as he did make cameo appearances in other games such as Superstars Tennis and Sonic & All-Stars Racing Transformed. So, we felt sorry for poor Alex Kidd because in the original game he is an orphan who lives alone in Miracle World (Planet Aries). But putting our emotions aside this game is awesome. Check it out!

This classic platform game is often referred to as being the best console game of all time, selling more than 20million copies worldwide – it just has to make out best retro games list! In fact, it was so popular that it led to an animated TV series! It’s not surprising to see its huge success because the gameplay, design, characters, music and sounds were, and still are to this day, superb! Ride Yoshi, chase the power-up mushrooms, or better still fly through the sky as Mario with his Cape Feather power-up in this undeniable 90s smash-hit game. Who needs a PS5?

The first Donkey Kong game to feature 3D gameplay where the player explores themed levels of an island, collecting items, and throwing barrels at enemies to defeat them. Complete mini games and puzzles along the way to receive extra bananas and collectibles. Up to four players can play in a separate multiplayer mode making this an ideal game to enjoy with friends, when lockdown is over!? A true classic. Very enjoyable gameplay. A worthy top 10 for sure! Oh, and who remembers the “DK Rap” from the games beginning sequence? Retro!

It’s back to the 80s, and back to SEGA with this 1986 game: Outrun. As the game name suggests, you must drive the fastest time and outrun the clock as time is ticking, and against you. This 3D video game sees the player drive the classic Ferrari Testarossa Spider (from a 3rd person view), weaving around bends and through dips. With each destination representing a different difficulty level, you must avoid the traffic and obstacles to beat the clock and race your way to the finish line.

The oldest game on our best retro games list selection: Duck Hunt, was released way back in 1984. Back then things were a lot simpler. Grab your gun, aim and shoot the ducks (don’t try this at home (or in the garden)). Part of the “light gun series”, this game was initially released in Japan, then North America making its way to Europe two years later. The player is rewarded with points for each duck it shoots and is required to shoot a certain number of ducks per round to make it to the next level. If unsuccessful, it’s game over! We told you it was simple, but it’s a lot of fun, honest!

Inspired by GTA, this action-adventure game is the 22nd instalment in The Simpsons video games, based on the American animated show. Go on missions, race and explore whilst many strange incidents occur in Springfield. Control one player character on each level, complete the missions and sub-plot. Walk on foot, jump, run, attack and drive your way around town, racing against other characters and collecting items before the time runs out.

The very first Sims game which sparked a huge run of success, all started here. This open-ended city-building video game puts you in charge of building a city, from scratch… pretty cool, right!? Decide where to place roads, landmarks, power plants, parks, fire stations and schools. Determine the tax rate, social policy and budget. Literally… create a city… from scratch! Feeling powerful yet? Well, you should be because you have a huge responsibility to develop three zones: residential, commercial and industrial zones. So, what are you waiting for, get to work! Well actually, read our last review first…

We couldn’t write a best retro games list without a sport game, and what better retro classic, than this 1999 addictive skateboarding game!? Ride a skateboard whilst listening to the games distinctive rock and ska music, collecting objects, completing missions and performing tricks in the 3D environment. The game objective is to earn the highest score by successfully landing tricks and performing combinations giving you the highest score. Grab, flip, twist and slide to create the most complicated trick possible avoiding not to fall. A brilliant multiplayer split-screen game. Another excellent retro game to play alone or with friends.

We hope you like our list of best retro games. If you’re a gamer that likes to write, why not create your own SPG account and contribute to our site? We’d love to hear from you!