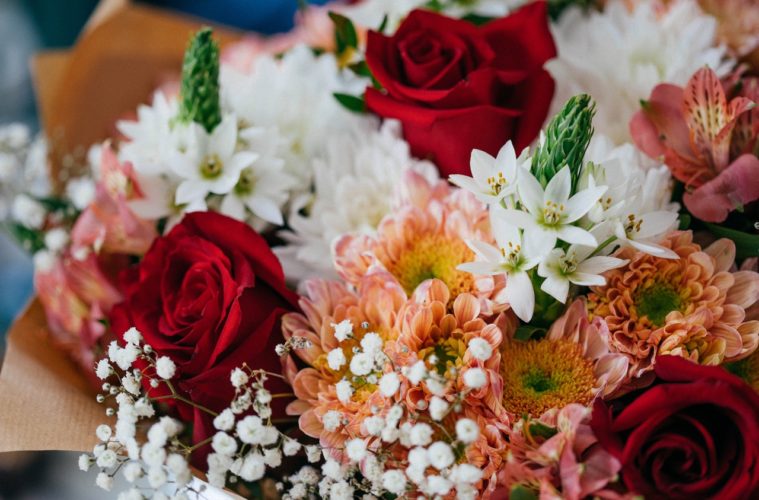 Why Do We Love Flowers?

Around the world, millions of flowers are given annually as sentimental gifts and tokens of affection. The two biggest holidays for flower giving are Valentine’s Day and Mother’s Day. It’s safe to say the recipients of these flowers are a majority of women.

It’s a millenia-old tradition, but why exactly do we love receiving flowers? In the eyes of men, giving roses surely serves no practical function – except to woo a potential lover, or appease one that’s become upset.

There are various perfectly explainable reasons as to why we love flowers, and we’re going to talk about some of them.

Giving flowers is a traditional act of courting

For centuries flowers, particularly timeless roses, have been associated with love and passion. The ancient Greeks believed that red roses were created by Aphrodite, the Goddess of Love, either accidentally or on purpose depending which mythology you read.

Ancient Romans of wealth also lavishly decorated their bedrooms with red roses, using the petals as cushioning on their beds for their amorous affairs.

In the middle ages and through the Victorian Era, many poems, sonnets, and romantic stories would allude to the rose, whether metaphorically or literally. “A rose by any other name would smell as sweet…” so goes the famous speech in Act II, Scene I of Romeo and Juliet.

In the modern day, of course we no longer believe in Greek Goddesses, and lavishing your bedroom in rose petals for a bit of Netflix and chill seems just a tad bit gaudy.

But even today, roses have maintained their iconic symbology as the flower of love, passion, and desire. For this reason, giving roses is simply tradition, which plays a very important part in society. Traditions are guidelines for society, and so we love receiving roses because we’re told that giving and receiving roses is a gesture of expressing deep feelings.

Flowers are delicate, soft to the touch, colourfully vibrant, and often smell nice. These are traits undeniably associated with ideas of feminine qualities, so we find a bit of personal expression in relating to flowers.

This isn’t simply about flowers matching personality types, but also has a bit of color psychology as well. It’s not the red rose itself that inspires passion, but rather the color red. A white rose would often have an entirely different meaning.

So because flowers convey moods and feelings, they become relatable to a person expressing those sentiments, and they also set the ambience for a room.

Flowers really freshen up a home

Decorating a home for aesthetic beauty and optimal coziness is no easy task, but we can often pride ourselves on having a bit of the homemaker’s touch. Creating a personal space that positively reflects the feminine qualities of the inhabitant is often enhanced with flowers, which also share those feminine qualities as mentioned earlier.

But it’s more than that, flowers also bring a touch of nature to human dwellings. Humans have always sought to keep nature outside of their dwellings. Our cave-dwelling ancestors contended with bats, and we sweep ants off the porch. Intentionally or not, we’ve pushed “nature” into small pockets of parks and reserves.

But even in our city apartments and concrete jungles, we’re still mammals. Bringing flowers and potted plants into our home remind us that we’re somehow more than talking apes living in square boxes, placating the sometimes tangible yearning we experience for the wonders and sights of earth’s natural beauty.