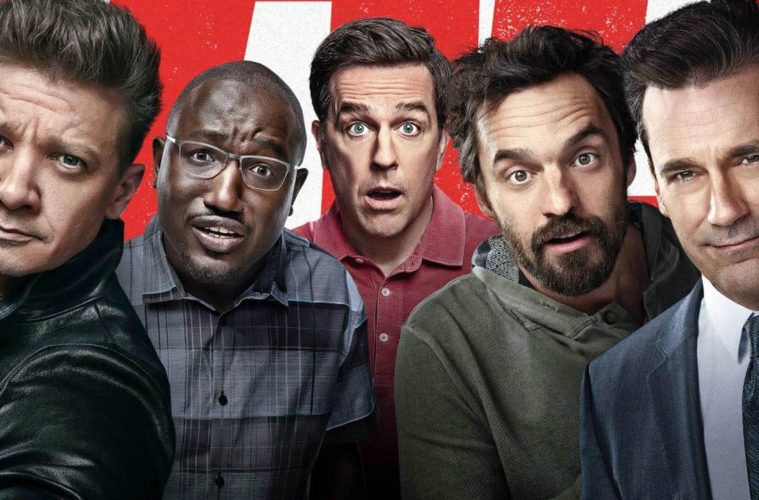 As far as films go, Tag is a perfect example of comedy movie-making at its finest.

Its story line is simply hilarious. Imagine a modern version of Big (Tom Hanks), blended with the ridiculousness of The Hangover (both starring Ed Helms), with a hint of The Bourne Legacy (Jeremy Renner), and then throw in some Ted style crudeness. This $78M Box Office movie is comedy gold. I’m not sure if I enjoyed it so much because I miss playing tag, or my childhood friends. Maybe Tag resonated with me because deep down, I’m a big kid and I like the idea of not having to grow up.

This is a story about a group of friends who have been playing tag for 30 years and despite being older with careers and responsibilities, play the game each year during the month of May. One player is undefeated and getting married, but that doesn’t stop this group of five friends dropping everything, going to extreme efforts and risking their lives to play tag, despite being adults.

Written by Rob McKittrick and Mark Steilen, and Directed by Jeff Tomsic (his feature directorial debut), this 2018 American comedy film had me laughing out loud from within moments of it starting.

The movie starts so ridiculously it’s hard to imagine (after you’ve spat your drink out), how it can keep up the ridiculousness for one hour and 45 minutes, but somehow they not only sustained but maxed-out the ridiculous level of the story-line, combat scenes and humour. The actors are all brilliant, the movie pace is uptempo and it really needs to be, because it doesn’t have a build up – it’s straight in! The movie music selection even had me going “yeahhhh”.

Being a guy, I found the movie Tag hilarious however, it’s probably not so appealing to girls, but I don’t want to sound sexist – so boys and girls give it a watch for yourself, it’s available right now on Netflix.

Summarised in 3 words I’d say Tag is: original, clever and funny – I can only imagine how hilarious this would’ve been to film and appear in. What makes Tag extra brilliant is that it’s inspired by a true story.