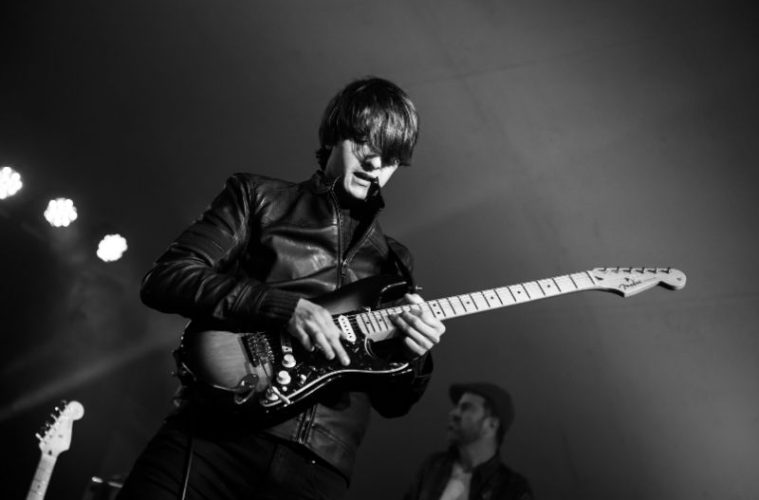 Brett Smith-Daniels on ‘Teenagers from Mars’ and Reforming Rock Music

Brett Smith-Daniels is a rock musician who has gained quite the musical pedigree from performing his music live across the globe. From sharing a stage with Mick Taylor from the Rolling Stones to inadvertently meeting and then sharing a stage with Micky Moody from Whitesnake, Brett’s seemingly ‘old school’ route of gigging his way into the music industry has gained him widespread praise and a network to be proud of.

Now living in Canada with his partner, Brett Smith-Daniels has released his new single ‘Teenagers from Mars’, an indie rock song that has recently been debuted on Radio 2 as part of his upcoming album ‘Disenchanted Youth’. As I sat down to a casual Zoom call with Brett, I was keen to hear about the making of his new single and hoped to gain an insight into the forthcoming album.

Upon beginning our conversation, I immediately clocked what appeared to be six different guitars in the background of Brett’s screen: a clear sign of his dedication to live rock music. Brett prides himself on being musically diverse, and upon hearing this, I was intrigued to hear about the direction he was aiming to take his music next…

”I admire people like Bowie who can genre hop.”

”Taking influence from genres that aren’t rock music and kind of wheeling them in is definitely a goal of mine because I think the ‘rock’ thing nowadays, is you know, I mean, rock music has been around for 50-60 years and it’s a bit played out. I think if you can inject new life into it by mixing it with elements of dance music or elements of hip-hop or elements of pop music. I think it just makes it a bit more ‘now’ and a bit less 15 years ago, you know?”

Brett’s versatility becomes immediately evident just by taking an initial listen to the first two songs on his Spotify page. The introduction to his latest single and Radio 2 debut ‘Teenagers from Mars’ harkens the smooth undertones of lead singer of the Arctic Monkey’s, Alex Turner, combined with an acoustic backing guitar which leads into a striking rock crescendo emulating the foundations of a Black Keys track – ‘Little Black Submarines’ initially springs to mind. Diversely, his second most listened to song on Spotify is entitled ‘Carefully Reckless’ and strikes connotations of The Beatles in the chorus.

But a humble Brett sounded surprised to hear me likening the song to something by Alex Turner or The Black Keys.

”That’s very kind of you to say,” he replied, with an ever so slightly bashful look on his face. 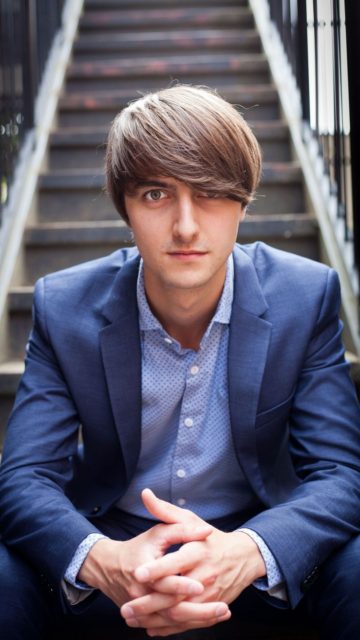 Having now compared him to such big indie rock names, I decided to probe Brett a little further into the making of ‘Teenagers of Mars’ to see what differentiates his track from other musicians.

”The album tackles a lot of social topics at the moment. I feel that in the recent years rock has lost its place in the modern music kind of landscape because people are too afraid to say anything. A lot of the time I hear a lot of bands that write stuff about not a lot. I’m trying to tap into that.”

It then becomes evident that, like the rest of ‘Disenchanted Youth’, Brett created ‘Teenagers from Mars’ having been inspired by voices of change.

”Being honest it was two years ago, I was watching a BBC documentary on Greta Thunberg and I’m quite environmentally conscious anyway; I’m a vegan (I know everyone says if you meet a vegan they’ll tell you in five minutes). I was watching that, and I was at home visiting my parents, so I was in a bit of a different mindset. I wasn’t working or anything like that and that is usually when songs start to flow. I watched that and I watched a bit of a documentary by David Attenborough, and I just thought ‘‘wow.’’ I went to bed that night and had a weird dream that I was on Mars and had a chorus in my head. About 45 minutes later I had most of the song flashed out and went to the studio about 6 months later and started working on it. It’s kind of cool because after I did the first solo EP I kind of lost the vitality in my song writing.”

Hearing this, I was keen to know how lockdown had affected Brett’s musicality. As an individual who has built his career around performing live, alongside working in bars, I had to assume that he had been significantly impacted by the recent restrictions.

”I think at the moment it’s important to realise that everyone is going through the same thing. At first, I was really worried about it. It was March 16th when we shut down in Canada last year. I was out gigging the night before because we had no idea how bad coronavirus was. It wasn’t a busy night but there were people on the dance floor and stuff on the night before we shut down. It was a steep drop out. I lost like 240 gigs in 2 days.” 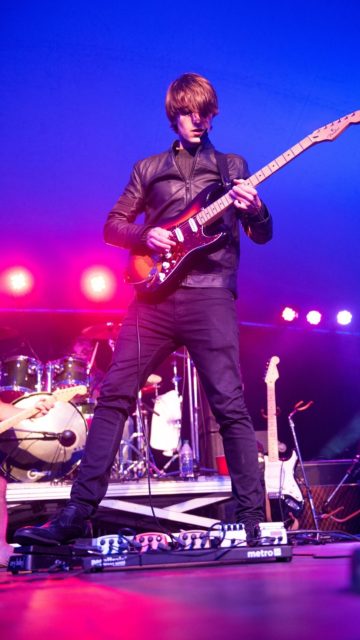 Having recently written an article on how TikTok has impacted the music industry, I wondered whether Brett felt that gigging was the best way to enter the music industry in an era now swamped with viral videos and internet sensations. Confidently, Brett replied:

”Yeah. I would probably start with social media and then go to gigs. Music kind of runs in my family. Not with gigging musicians per se but my nan is a musician, and she was working as a music teacher for years…so there has always been that framework for me that you can earn a living as a musician if you want.

But pushing myself as an artist definitely doesn’t necessarily go hand in hand with playing at weddings and playing at pubs. It’s a totally different stratosphere. So yeah I think if I was starting out again I would definitely focus on the social media aspect of things first.

The other thing I would probably do is buy a computer sooner. Honestly, I just switched over to Mac. It’s from 2010, it’s an old one, I got it for $100 from Facebook Market. But honestly, it has changed my whole process because I’ve got a little home studio and it’s way cheaper to record at home. I was going into studios before and it’s way too expensive. Before that I’ve been working off the iPad and that was a nightmare…”

Though we both laughed at Brett’s slightly belated introduction to technology, his point seemed like an interesting one to touch on. Streaming platforms have made it significantly easier for artists to promote their own music, but this is made even simpler with the help of owning your own technology to upload and record your music. Though investing in a laptop may seem like an expensive step, it seems to be the cheapest way to record your own songs in comparison to hiring a studio, which Brett informs me can be as much as £300 a day plus travel and more.

”There’s a reason why indie is predominantly a big thing in rock music right now, because you can literally rock up and do your stuff at home. Basically, I would definitely go down the social media route; if I were to start again, I would have definitely got into home recording sooner.”

I wondered, as an established musician, what advice Brett might give to younger people just starting out in the industry and looking to have their music heard.

”I think don’t be afraid to do cover gigs and things that don’t look flashy because that is literally how you make a living. I got to know Micky Moodie from Whitesnake because he plays in a cover band.”

”Also session work for other artists if you’re a musician and you can utilise a specific skill. Whether that means you’re a producer and you make specific beats or if you’re a guitar player like me and you can play for other people’s records. There’s a lot of people recording right now so tapping into that has been great.”

Following the release of his single, Brett Smith-Daniels said he was actively recording his new album and was eventually looking to return to the UK after getting his vaccine in the next 6 months. Fingers crossed this means there is a chance we can all experience his music in a live setting.

With a smile on his face, Brett assured me a sneak peak of the album when it is close to being finished, but I asked if him could go one step further and give The Student Pocket Guide a taste of what we can expect from his upcoming music…

”Definitely cinematic. If I was to go for a reference track that I was trying to emulate then I’d say ‘Another way to die’ by Jack White or maybe a bit of Gary Clark Junior’s version of ‘Come Together’ that he did for Justice League a couple of years ago. It has got that kind of like heavy, slightly hip-hop influence without being a hip-hop track. It is more aimed at film soundtracks if I am honest.

The next one after that is a completely different vibe. Imagine a kind of Billie Eilish type thing, a bit more pop production mixed with an Oasis pub song you would raise your hand up and sing to. That third one I think is the one I’m really going to push. I am quite passionate about it; I think it speaks to a lot of issues right now as well.’”

I, for one, am excited to see what else is in store from Brett Smith-Daniels, a multi-faceted artist with an aim to use his lyrics to make the rock genre a more socially and politically aware discussion space.

If you would like to find out more about Brett’s music, then be sure to visit his official website at: https://brettsmithdaniels.com/

You can also listen to his new single ‘Teenagers from Mars’ here: https://tinyurl.com/TFMBSD