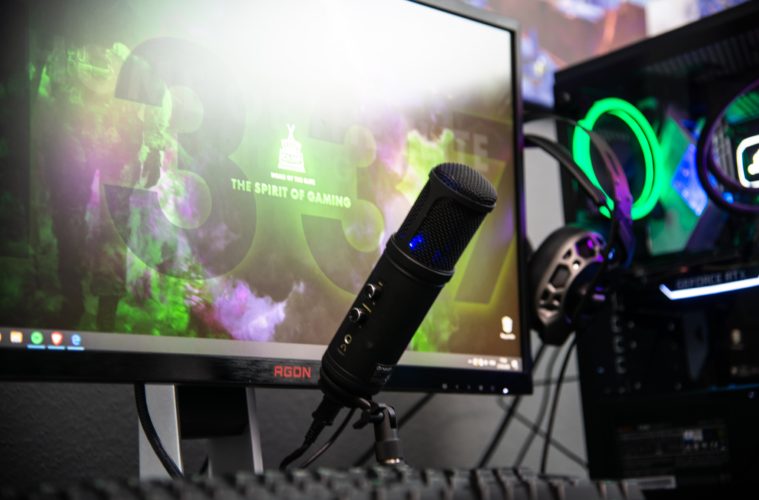 If you’re a gamer, chances are you’ve been thinking of starting to stream on Twitch or Mixer. In order to stand out from others, you’re going to need to make sure you have the best possible streaming setup.

For your perfect streaming setup you’ll need something that ensures your audience can hear you clearly. Ideally you want no interference, and you need good sound quality so that you don’t keep cutting out. Some of the best microphones out there include the Shure MV7 and the Samson G-Track Pro. While these would definitely be amazing, they’re also very pricey. If you’re just starting out, or would rather have a cheaper alternative, then try the HyperX SoloCast or the Blue Snowball – they’re still great quality, but cost considerably less.

A headset is a good idea for streaming, especially if you’re playing online games. Having a good headset will allow you to hear both your game and yourself far better. The SteelSeries Arctis 7 is a great headset to go for despite its high price. However, if you’re looking for a more budget friendly alternative, you can’t go wrong with the Logitech G332, still one of the best headsets out there but it’s around half the price.

While a camera isn’t necessary for streaming, you may still want one. Rather than just using your PC or laptop’s built in webcam, it’s a better idea to get a professional one, like the Logitech C922 Pro or Brio Ultra HD Pro. Like most things, there are cheaper options that are still good quality, such as the Microsoft LifeCam HD-3000, though this does only record in 720p.

Following on from cameras, you’re going to need to ensure you have the perfect lighting. You could go all out and get yourself the MOUNTDOG Softbox Lighting Kit, which comes with everything you need for a studio-style setup. However, the Elgato Key Light will do pretty much the same job by itself, without needing lots of bits of equipment.

While some consoles (like the Xbox One) have Twitch built in, others don’t. In order to stream from the Nintendo Switch, you need to use a capture card. You’re going to want a fast one to avoid as much lag as possible, and as high a resolution as you can get so you don’t lose out on the quality of the image. The AverMedia Live Gamer Portable 2 Plus (just a bit of a mouthful) and the Elgato Game Capture H60 S are some of the best capture cards around. Naturally, they come at a pretty hefty price. If you don’t mind sacrificing a little bit of quality, then you can get the Venker Capture Card for considerably cheaper.

To stream using a capture card, or to edit your streams after they’re done, you’ll need a few pieces of additional software. OBS Studio is free to use, and allows you to record your streams, and even to live broadcast them to Twitch. However, to edit your streams the best piece of software is Adobe Premiere Pro, which unfortunately will cost you monthly. Students do get a big saving on this software, though, making it more affordable, but bear in mind it will go up in price when you’re no longer a student.

This may seem like an awful lot of stuff just to stream, but you’ll find most professional streamers use even more than this. Obviously, you don’t need all of it to start out, all you really need is a microphone and a games console; this is just a guide on how to take your streaming setup to the next level.