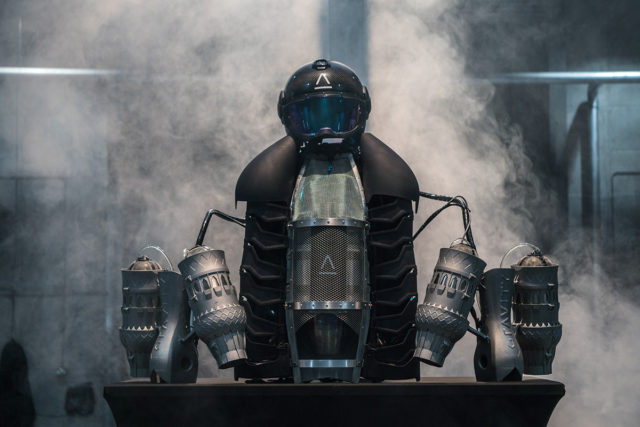 These days, tech development seems like an unending quest to make the impossible possible.

Devices like Alexa or even your iPhone would have been conceptually impossible sub-20 years ago. Now, though? They are taking the world by storm every day of every year. Where tech development gets most fascinating however, is when you look deep into the prototypes. What is slowly becoming a reality in the tech world are things that still seem impossible today. This is where the fine folks at Gravity Industries come in.

As per a prior interview with founder Richard Browning, Gravity Industries’ mission statement is a simple one. To make flying like Iron Man a reality. While the Iron Man films of the MCU weren’t a direct inspiration, the similarities can’t be missed. After all, when people are usually asked what superpower they would like most of all; flight comes up A LOT.

Brief History of the Jetpack

When we think of ‘jetpacks’, our minds are often drawn to fiction like James Bond. Bond would often take to the skies in a jet-propelled backpack to pursue the bad-guys. As fun and useful as it seems in those movies, we are clearly able to distinguish that it’s a fictional concept. However, behind the scenes in real life, jetpack devices have long been in development. Going back as far as 1956, where a Romanian inventor named Justin Capră infamously claims to have developed a ‘flying rucksack’ prototype. Presenting it to various local organisations and even the American embassy, where no interest was shown. Giving up himself, the prototype’s idea and design was then taken to Bell Laboratories in the US, who quickly gave up as well.

But, as they say, necessity is the mother of invention. Thus, now, 60 years later, here we are with Gravity Industries. Reiterated upon countless times, we are now reaching a point where the Jetpack is a real working device. Finally proving that perhaps James Bond isn’t as special as we all once thought.

How will Gravity Industries’ Jet-Suit be used?

From a jet-propelled backpack to a jet-propelled SUIT, what Gravity have achieved here is truly remarkable. But who will be benefitting from their technology? Well, for now, just their dedicated customer-base. At the moment, one can sign up for a training program for £2,000. The price may seem steep but customers get the chance to test the jet-suit at Gravity Industries HQ in a safe and controlled environment. Reviews so far for this experience have been stellar and the people who have tried it seem confident in its future.

And that’s just from the prototype. As you might expect, Gravity Industries have big plans for their jet-suit outside of a one-of-a-kind experience at their testing grounds. Which begs the obvious question:

What are Gravity Industries’ Ambitions for the Jet-Suit?

Outside of their successful development and customer feedback so far, Browning is looking to the device’s promising future. It should come as no surprise that the militaries of the world have expressed keen interest in the jet-suit. Uses such as transporting heavy equipment across a battlefield, thus saving an expenditure of manpower. There has even been talk of using the device to deploy marines from an aircraft carrier. Which, surely will save a lot of time and risk on their part.

For now however, the device is still very much in a prototype state. Problems such as excessive noise and limited range have meant that jet-suits and jetpacks are still very much a work-in-progress.

Browning remains confident however. Through iteration and fortitude, their jet-suit will become the next step in achieving the impossible power of human flight. From fiction to reality; you can’t beat results like these.