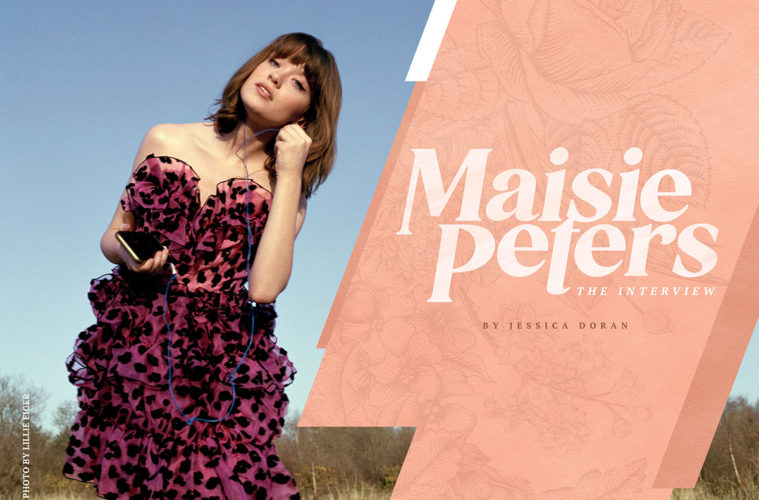 After making her internet debut on YouTube, Maisie Peters’ songs have received half a billion streams. Acclaimed by Taylor Swift and scouted by Ed Sheeran, Peters signed to Sheeran’s own label, Gingerbread Man Records, last year. Following this success, Peters has just released her debut album ‘You Signed Up For This’. Featuring hit tracks such as ‘Psycho’, Maisie is one to watch on the pop scene!

So, Maisie, did the praise you received prior to the creation of your debut album make you feel more confident about its release?

Yeah, I think so. I don’t think you can be fully confident about the release of something because you never know how it’s going to go until you do it. I’d say it’s like that metaphor (which I’m going to get very wrong), but with the cat in the box and if you don’t open the box then the cat might be alive. So, releasing music is a bit like the cat in the box. But some of the things, they’re just so cool, it made me feel that it had a higher chance of doing well.

Before you were signed to a record label, I hear you were busking. How long did it take you before your Disney covers turned into making your own music?

At that point I was already performing my own songs and writing them, and I would busk them too along with the Disney covers, but back then I was also doing a lot of open mics and local festivals and playing my songs there. Then I had a YouTube channel around that time and that’s where it kicked off.

Was there something you were specifically looking for in a label which you found in Ed Sheeran’s Gingerbread Man Records?

I think it’s more about the people who are there and who you can see yourself working with for a long time. Everybody will always have their differences, but if you believe and trust in the people and if they have the same vision for your future as you, then that’s when you know which one is right. Ed is a huge part of that, he’s amazing, that goes without saying. He is talented and has experienced everything, so he is a great mentor. They [the label] are really supportive and help me to make the music I want to make. 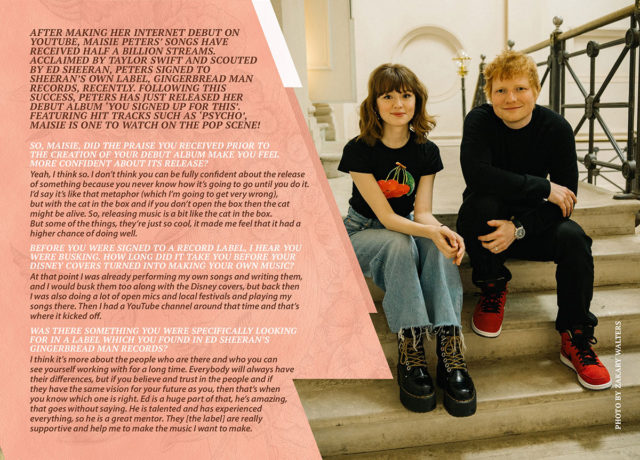 Let’s talk about the new album which was released recently. I absolutely love the title! Where did you come up with it?

The title came from the first track of the album. In the verse it goes ‘I’m sorry to make it about myself but you signed up for this’. For a long time, I wanted the title to be that, and everyone was like “Maisie this is too long,” which is very fair. So, I ended up going for ‘You Signed Up For This’. I just thought it was a statement title; it was addressing the listener and I was addressing myself in the same way.

Your new album combines an acoustic/folk vibe with modern-day pop. How do you think your musical style has changed since your debut single in 2017?

I think that I’ve maybe just gotten broader in terms of the range of things that I do, but I always loved pop music even in 2017 when it was more acoustic led. I always loved Taylor Swift and Carly Rae Jepsen, and then it didn’t take me long. I think the following year was my first venture into that pop music world. Nowadays I still make acoustic music, but I’m at the point where I can use a wider range of stuff.

I’ve really enjoyed the more recent music videos for ‘John Hughes Movie’ and ‘Psycho’. Both take a slightly darker turn which contrasts the sugar-coated pop melody with gore and revenge. Is this a style that you would like to continue in your song writing and in the rest of the music videos for the album?

Yeah, for sure. I really enjoy the dark twists I’ve used in some of these music videos. I think it’s really fun. I also think it’s accurate to the music that it feels sort of romantic and warm and colourful, but it also has this sort of sarcastic dark twist on them, which I think is relevant to me and my personality.

You said that Taylor Swift is one of your biggest inspirations, and Swift is an artist who uses her music to communicate her female perspective. How do you think being a woman in this industry affects what you write about in your music?

I guess it sort of infiltrates everything you do, but at the same time it isn’t a motivator in song. I just make the music I want to make and if people find that empowering then that’s amazing. Art is art, and everyone should make what they want, but it’s wonderful when it has a positive outcome! 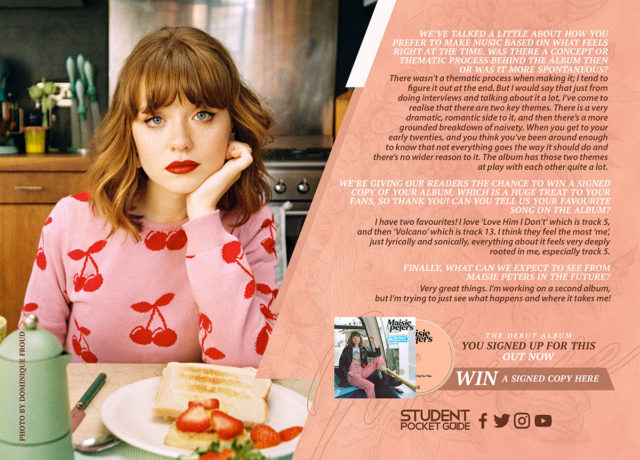 We’ve talked a little about how you prefer to make music based on what feels right at the time. Was there a concept or thematic process behind the album then or was it more spontaneous?

There wasn’t a thematic process when making it; I tend to figure it out at the end. But I would say that just from doing interviews and talking about it a lot, I’ve come to realise that there are two key themes. There is a very dramatic, romantic side to it, and then there’s a more grounded breakdown of naivety. When you get to your early twenties, and you think you’ve been around enough to know that not everything goes the way it should do and there’s no wider reason to it. The album has those two themes at play with each other quite a lot.

We’re giving our readers the chance to win a signed copy of your album, which is a huge treat to your fans, so thank you! Can you tell us your favourite song on the album?

I have two favourites! I love ‘Love Him I Don’t’ which is track 5, and then ‘Volcano’ which is track 13. I think they feel the most ‘me’, just lyrically and sonically, everything about it feels very deeply rooted in me, especially track 5.

Finally, what can we expect to see from Maisie Peters in the future?

Very great things. I’m working on a second album, but I’m trying to just see what happens and where it takes me!