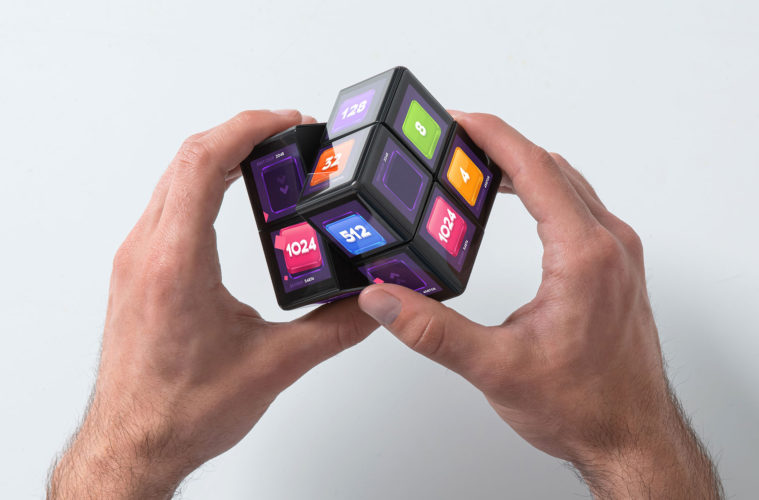 The biggest beasts of the gaming world may have driven long-term Sony and Microsoft fans into frenzy last November, but not everyone is super into 1440p resolution and 60 fps. The latest entertainment system soon to disrupt the market takes on an old-school twist: WOWCube, a 2×2 Rubik’s Cube meets mixed-reality gaming.

This multi-dimensional object is a modular gaming console comprising 8 distinct cubes magnetically joined to form a bigger cube. Meant to be twisted, shaken and tilted, “it signals the start of a new and amazing experience with a smart and educational device that uses classically inspired gaming mechanics” according to its FAQ.

And it wouldn’t be smart without a few handy widgets: Bluetooth facilitates the cube’s doubling as a smart display. Thus, allowing users to connect to their smart speakers, TVs or smartphones. A truly all-in-one device that presents today’s weather, crypto rates and emails. Not to forget its built-in standard features such as timers coupled with ambience mode for the late-night romantics!

You can download extra features via WOWCube Connect, available on iOS and Android. Up to 24 games can be loaded at any given time. To shamelessly plug my Editor’s rights: I will be sure to post an in-depth technical review and share my own games in the coming months, using their openly available SDK and APIs interfaced via PAWN programming language for third-party developers.

Peering through the educational lens, WOWCube shows much potential as the next-gen pedagogical gem.

The startup’s distributor relations manager, Alexey Stepanov, interviewed by Russia Beyond last year is quoted as saying “[it] can be used to help teach mathematics, memorize the chemical formulas of molecules, and train kids how to code through special programs.”

It also lets you download immersive comics, where characters can interact with the screen movements. Stepanov stresses how it is as much a toy as it is the perfect classroom buddy.

“The child holds it at a distance and develops not only coordination skills, but also spatial thinking. On top of that, the cube is practically unbreakable. It can be separated into all eight faces, and each will work. If the child damages or loses one of the modules, you can simply buy the missing part.”

The console’s conception in 2016 is equally fascinating: the brainchild of then-13-year-old inventor, Savva Osipov. He sports a shy grin as he showcases the aesthetically sleek designs of his proudest idea in his latest promotion.

The budding entrepreneur notes “we started doing this because we believe people have always loved fidgeting and interacting with something in their hands — it’s a soothing experience that brings emotional pleasure […] people love gaming on the go, and our WOWCube combines both!”

Surfing the teen inventor’s blogs reveals an upbeat, adventurous engineering geek, whose enthusiasm and technical talent shines through the ages. Six years after the product’s inception with his father and co-founder of parent company Cubios, Ilya Osipov, WOWCube aims to warp its handheld cousins by the end of next month.

Watch out for the price though: $149 – $249. Retailing at the cost of a typical smartphone, it is difficult to say whether its novelty justifies the hefty tag.

Those watching the interactive gaming sphere will fondly remember the Sifteo Cubes. Discontinued in 2014, its short lifespan serves as a substantial precedent for the inevitable fate of targeting a niche segment. The games on offer were pitifully shallow such that there was little point in fiddling with its obtuse tangible interface in a feeble attempt to justify the exorbitant purchase.

WOWCube must be open to contributions from the top AAA gaming producers and willing to add (or reduce) features. Players will then be able to more easily relate to its original yet peculiar controls. Porting existing games is tremendously difficult at the best of times, hence, it would be sound investment to recruit innovative studios that can capitalise on the console’s twisty mechanics to demonstrate the cube was created for those games, not the other way around.

Perhaps it is no more than a kid’s toy that serves to satiate their boredom at the restaurant. Only to be tossed like the common fidget spinner. Others may be put off by the jingling 3-dimensional logic, perhaps even tempted to tear apart the 24 screens and forcibly re-stick them in their correct configurations only to end up with ripped fingernails and just where is my paint brush—

Point being: for a device targeting the teen demographic, surely it is a little too expensive?

But not to worry. Cubios will openly share full blueprints in the developers’ avant-garde spirit, enabling exact replication (for non-commercial use) for the DIY hackers out there. This pleasantly unexpected move certainly tickles the inner-roboticist pumping within! I’ll be sure to kick-start my 3D printer as soon as it is released.

At present, WOWCube is ready to ship to global distribution chains and soon to display on Amazon. Pre-orders are opening soon, so head over to their website to claim your 40% launch day discount!