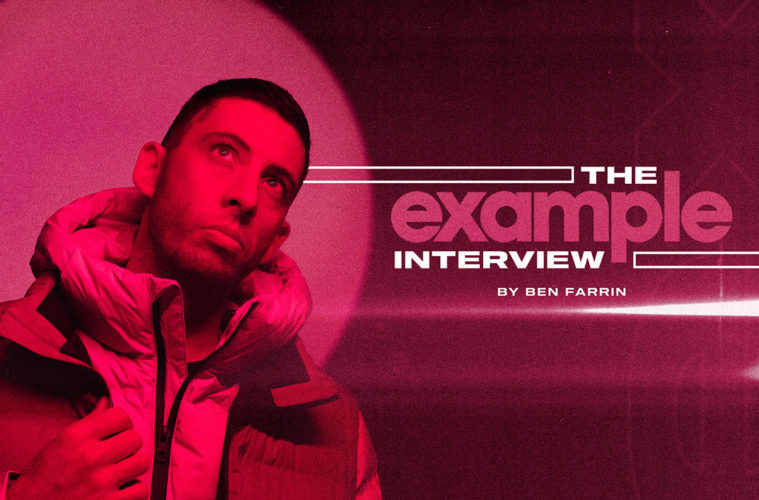 Hey Elliot, it’s been a long time since we spoke! I think the last time we met was at Creamfields and our journalist accidentally stepped on your brand-new white trainers after you specifically asking him not to (sorry). I hope they washed up ok! So, how are you keeping? Excited about starting your UK tour later this month?

I’m not sure I meet people and specifically ask them not to step on my trainers, haha!! No seriously, if I actually was wearing brand new white trainers to a festival then I probably deserved to have them ruined! I’m great actually. UK summer was amazing, so good to be back in front of huge crowds again. Australia has been slowly opening back up again. I’ve been playing loads of shows here at weekends as the Australian summer starts as the US winter does. Always weird adjusting to being back home with the wife and kids but it’s part of the job, I guess. This UK tour coming up is going to be the biggest, boldest, brightest, most energetic I’ve ever done. It’s organised pandemonium. Playing every hit and all the new bangers.

It’s great to see you’re performing at our hometown Norwich on Tuesday 8th Feb, a few of the team have booked the Wednesday off, ha. What’s it like for you when you are on tour. Is it all work and no play or do you and your crew also let your hair down after your gigs?

It depends. Most nights it’s important I eat something substantial because 90mins on stage is a proper workout, so I need to get a good feed in after the show. I’d say half the gigs afterwards we’re pretty sensible and half of them we’re pretty wild. Especially the big cities like Birmingham and Manchester and London, there’s always so many friends and family knocking about backstage who I haven’t seen for ages because I now live on the other side of the world.

We’re really excited to hear about your new album! Can you talk to us about it please? What’s the story behind it and the style of songs featured?

It’s a really mixed bag – mostly UK garage or 2-step. A few drum and bass songs. A few French house / funk style as well. I’m singing a lot softer and laidback on this album compared to previous albums. There’s not a lot of rapping but whenever I do spit, I’m really going hard with it… The story you’ll have to wait and see… but let’s just say it’s about not wanting to grow up.

You’ve obviously relocated to Brisbane where you live with your wife and children. Do you find that your surroundings effect your writing and what impact has your relocation had on your music, if any?

I thought it might do at first but really, it’s just about finding the right space to write in. It could be a park or my balcony or whilst I’m jogging by the river where I might think of a song idea or melody. Also, getting plenty of sleep and exercise actually makes me more creative. I used to think it was the opposite! Late nights and too many parties. I can’t do that anymore and still be productive.

Wikipedia tells me it’s your BIG birthday coming up! Sorry to hint at the age, but to make it fair, I can tell you it’s my (same age) birthday on May 30th, so I might still be celebrating by the time yours comes around. Do you have any big plans for yours?

Haha. You’re trying to be discreet and respectful I like it! The big 4-0, yes. Erin’s is May 22nd and mine is June 20th, so I think somewhere in between we’ll do a big joint celebration. Probably a boat party in the sun.

Here at SPG we genuinely enjoy following you on socials. You upload a really nice mix of funny and compassionate posts where you interact with, and support your fans. As someone who clearly has a good sense of humour, what is the funniest story you can tell us about yourself?

Every day there is a funny story for me. I’m pretty weird and full of energy. I talk to strangers, do random acts of kindness, treat people who aren’t expecting it. There’s too many to choose from really.

Looking back at your extremely successful career, what have been the hardest lessons you have learned, and what would you have done differently, if anything?

The main lesson I’ve learnt in life is to listen. I was never a good listener. I always rushed around everywhere and second guessed everything and finished peoples sentences. It got really out of hand. I’m much more relaxed now and more secure in myself and in all surroundings. I don’t actually regret anything and wouldn’t change a thing. It’s all part of the journey learn from your mistakes and your triumphs.

As someone who’s won numerous awards, had 3 UK number 1s and 8 UK top 10s, what words of inspiration can you share with students who might dream of a career in music?

Well firstly I’d say that I wouldn’t measure success or achievements based on the charts or awards. You can have a successful career in music without ever winning an award or being in the charts. In today’s market you may just have a tonne of streams on Spotify or Apple Music and never be on the television. You may sell loads of gig tickets and not be played on radio. You may be huge on TikTok and not even have a Twitter account. The key thing I would say is to constantly hustle, ask other people questions, ask questions about yourself, constantly evolve, never give up! But most important of all be true to yourself, never release a song that you don’t actually feel represents you, never agree to a collaboration that doesn’t seem organic. I just worked everything out myself at the start but now have an amazing network and team around me. I am probably more ambitious than ever and I’ve been doing this 15 years now.

There’s a lot going on in the world – if Example was PM for 1 day, what would be the first big decision you’d make, or the first person you would call?

I’d call my mum and ask her how I became PM lol!? I think the first thing I’d do is make sure there weren’t super rich people living in the UK and avoiding paying tax. We could solve a lot of our problems if we properly taxed the loophole thriving super rich.

Have you always been a confident person – what was you like as a kid?

I’ve always been a bit of an attention seeker and a performer. I wasn’t always confident though. I would often be shy depending on the situation or group I was in. Over time though I’ve become more comfortable in my own skin… I don’t think there’s a specific age that someone should expect to be fully certain of themselves. I’m 40 this year and still trying to be a better person and listen to advice.

Can you remember the first time you ever sang in public as a kid, and can you describe that moment?

I can remember singing in a school assembly. My mum put me in a drama group when I was 8 so I’ve never had stage fright. When I was 12, I think my voice started breaking and it went so deep in such a short space of time there was a moment where I didn’t want to sing publicly. I don’t have perfect pitch even now, but I think it adds to the rawness of my performances, almost like grunge meets the blues. I sing how I talk and I’m happy with that. I don’t have to put one a stage voice.

What’s the best thing about being Example?

My wife and kids. And having the best job in the world. We have a nice cat as well now.

Before we go, 2022 is clearly a big year for you what with the release of your new album and UK tour, but can you let us into any possible secret plans or projects you might have coming-up this year after your tour?

I am launching a new initiative which is part charity and part foundation, giving opportunities to undiscovered raw talent all across the UK and eventually the globe. More info soon!