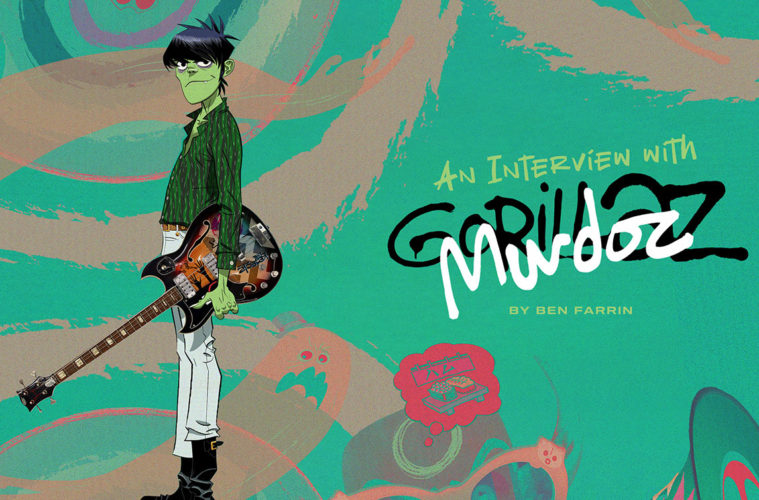 Hey Murdoc, let’s get straight to it – I know you’re a busy man, and 20 years at the top of your game is one impressive stint! Looking back over your highly successful career, are you able to explain why you think the band have been so successful during this time?

Murdoc: Nicely worded question, mate! Impressive for a student. I reckon you’ll go far, if you ever manage to pay off those crippling loans. Speaking of onerous debts, let me just state, for the record, that my own incredible success has absolutely nothing to do with the rumours that I signed some Faustian pact with a higher – ok, lower – power.

You’ve had an incredible journey, and I guess the fans only really see (or associate with), the highs? What have been the highest highs, and lowest lows since starting out with Gorillaz?

Murdoc: I like you. Another top-class question. I won’t traumatise your readers with the highs, but one low sticks in the mind. 2D and I were having a few sambucas after a show, we must have got carried away because we woke up a few days later in a two-man submersible at the base of the Mariana Trench. Doesn’t get much lower than that, especially on a hangover.

You’ve toured the world from San Diego to Syria and Montevideo to Manchester. You must have some epic stories! What’s it like being on tour with you guys and can you share anything with the fans from your adventures that they might not already know?

Murdoc: I’m going to defer this question to my former colleague and dear friend Hamish, who was Gorillaz’ head roadie for years until several incidents left him incapacitated. Hamish very generously recounted some of our larks in the Gorillaz Almanac, a little book we published in 2020. It’s all in there, have a butchers.

The last time we spoke to Gorillaz was back in Feb 2019 when we had a chat with Noodle who was complaining about you and I quote “whether he’s lying about what he did last night, or just exaggerating the truth. He’s always up to no good with that mouth of his.” We wonder what your opinion is to this and are you and Noodle getting on any better these days?

Murdoc: Come on, mate, that was 2019! We’ve moved on, capiche? What happens in the past stays in the past, that’s my motto. It’s a philosophy that helps me remain in the moment while giving me licence to behave exactly as I like without having to worry about guilt or regret.

Let us take this opportunity to thank you for your time because it’s not often we get to talk to such high achieving artists. 7 albums, 43 singles, 2 documentary films, over 175 live shows, 24 million records sold globally and 5 billion+ global Spotify streams amongst many other huge achievements – simply incredible! Has this all been a part of a long dominating plan, or has it unfolded as you’ve gone along?

Murdoc: Couldn’t have put it better myself! In fact I think I’ll copy and paste that onto my LinkedIn profile. FYI you missed off 3 Rear of the Year awards (Staffordshire Gazette) and my Nobel Peace Prize (pending). But fair’s fair, I can’t take all the credit, Gorillaz is a team effort and the other three have def chipped in along the way. Ball park estimate, I can take about 97% of the credit. (I’ll let you students do the maths.)

Gorillaz recently launched a limited-edition clothing line called G Foot collection to celebrate 20 years of your unique style. On the G Foot website, it mentions the clothing line is “real style in a cartoon world.” How many realms do you think are there in this crazy world, and if you have pretty much dominated the cartoon world, what’s next?

Murdoc: Always fancied doing a tour in Hell, actually. We’ve got a massive following in the netherworld, and it couldn’t be much worse than some of the places we’ve played, especially in the early days. Saw fewer pitchforks in Hell than at some of our gigs in rural Stoke.

How do you think living beings from another galaxy might perceive Gorillaz if they had never heard you before, and how would you describe yourselves to them?

Murdoc: Depends very much on the alien species in question, mate. If we’re talking an advanced, super-intelligent and incredibly sexy species, they would naturally feel a kinship with me, plus probably wonder why I’m not the frontman. But if it’s a rudimentary species like a single cell organism or some pathetic space blancmange, they would find something relatable in 2D. Gorillaz has something for everyone, that’s why we transcend all boundaries.

Getting back to reality and assuming we do not find any new dimensions, to finalise this interview, maybe you can share some words of wisdom and inspiration to students reading this, who dream of making a successful career in music…

Murdoc: Talent is not enough. Hard work is not enough. Bribery, extortion, and blackmail are not enough. Success requires the lot of them. But you’re probably thinking, ‘Another great quote, Murdoc, inspiring as always – however, I’m a dreadful musician with no talent at all! What can I do?’ Well, don’t be disheartened – take inspiration from my bandmates Russel, Noodle and 2D, attach yourself to a meteoric talent and ride their slipstream all the way to the stars. Failing that, try something else. I hear they need lorry drivers.