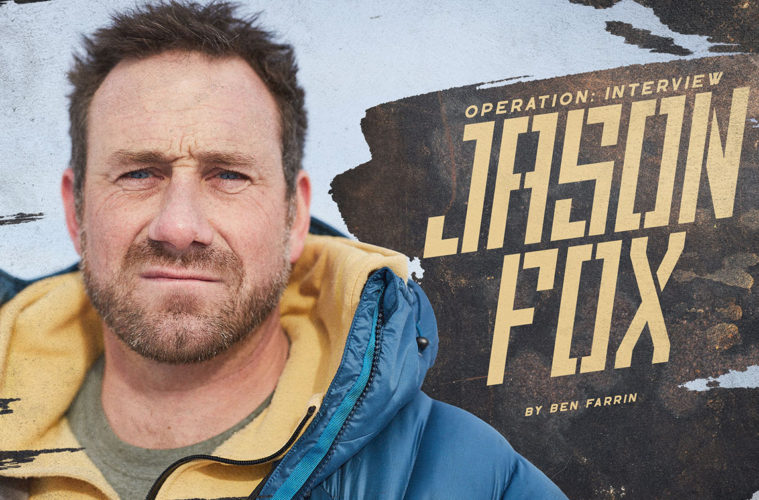 Jason Fox joined the Royal Marines Commandos at just 16 and served for 10 years during which time he had to grow up extremely fast. He’s now a very well-known TV personality on shows such as SAS: Who Dares Wins and Foxy’s Fearless 48 Hours. We caught up with the humble hard-man to talk about his toughest operations in the Special Forces, his autobiography, PTSD and partnering with MENTOR360, new tour and meeting cartel leaders, hitmen and smugglers he once fought against…

Hi Jason, firstly thank you for your time, I’m really excited to hear what you have to say. I was hoping to start from the beginning – what was your childhood like growing up prior to you joining the Special Forces?

I had a pretty standard childhood, it was a good upbringing. My parents were good, they were always wanting me to get out and about and enjoy the outdoors. One thing I would say is that I grew up in Luton, it wasn’t the most affluent area at the time, and through certain influences at school I was destined to get into trouble, because of the person I was. And I wasn’t very good at school, not academically anyway. I was more of an outdoorsy person. At 16 I had a subconscious presence of mind to get myself out of that so joined the Royal Marines.

Was this a pivotal time of your career and how did it effect you, making this transition at that age?

It was the thing that made me a man, I had to grow up really quickly. There was a lot that I struggled with, especially the personal admin. I found it very difficult but over a period of time I embraced it and then started to enjoy it and realised being a soldier is something that I wanted to do and wanted to keep pushing myself to see how far I could get, what level I could get myself to.

Absolutely horrendous. Selection is an absolute slog, it doesn’t matter how good a soldier you are, how much experience you have got, it’s designed to be monotonous, there’s no real encouragement, there’s no one telling you that you have to be there, and I think that is what makes it harder because it’s all on you. The motivation comes from you. The monotony of getting up at 4:30am when it’s absolutely pouring with rain outside and you’ve got to get up and go on a 20 or 30km march takes its toll. And then after that phase, which is 4 weeks long, you move to 6 weeks of living in the jungle and you’re being assessed constantly. It was tough, but it’s something that I’m glad I did and I am very proud I was able to grit it out.

Can you give us an example of the physically toughest and most exhausting challenges you’ve faced during your career in the Special Forces?

There is a lot of stuff that is tough and physical but I would say that going away on operation, war fighting in the Special Forces. Not only is it physically demanding, but it’s psychologically demanding as well, as you are always thinking about the prospect of getting seriously hurt or killed, you’ve got to remain switched on and look out for your mates.

I’m no expert but I’d presume a lot of the work involved is not just strength and fitness related but tactical planning and crucially timed decisions. What kind of attributes are required in order to fulfil your duties within the Special Forces?

A lot of tactical planning, mindset and being able to make decisions in high stress environments. The attributes that make up a Special Forces soldier are obviously physical and mental robustness but also having the ability to remain comfortable in uncomfortable situations – having a flexible mindset that isn’t governed by a plan, so if something goes wrong you are able to remain focused on what you need to do and what you need to achieve. I think also a little bit of stubbornness, but also people seem to forget that the job entails working with other people, other nationalities, so there is a high level of empathy, trust and loyalty involved – all these skills come into it on a daily basis.

In your autobiography, Battle Scars you talk about gunfights, hostage rescues, daring escapes and heroic endeavours. What has been the most dangerous mission you have been on, of them all?

They’re all dangerous, but my last tour which was in 2009/10, was probably the most intense, the operational tempo was very high, it was very kinetic which means we were going out on operations regularly and getting involved in fire fights. We probably lost around 25% of the squadron to either death or life changing injury which takes its toll on you psychologically. I was involved in a hostage rescue mission at the beginning of that tour. It was probably one of the most intense short periods of time I ever experienced. Normally when you are in battle it comes in waves, there is a burst of gunfire, then it will calm down, whereas this was just constant aggression and violence from start to finish.

You were sadly diagnosed with PTSD, and not only are you open about your struggles but you have partnered with MENTOR360, a mental health and wellbeing app, providing tailored support from industry leading medical professionals, for silent mental health sufferers. What is the vision of this venture in terms of the people you are trying to reach and help?

I left the military with PTSD, after I had done that, and then decided to speak out, which took a little bit of time because I was uncomfortable with why I left. I was then asked to go back to my unit and talk to the commander about what to spot within individuals that could be suffering from mental health issues. It was when I was doing that, a good friend of mine, Bertie, was sat in on one of those presentations, and we discussed my journey, and he was like, “why didn’t you say anything?”. I said I didn’t know I could, and that sent Bertie on a journey of being interested in people’s welfare, especially psychologically and that, coupled with his own dealing of his dad’s suicide and the fact that he has got a step son who has suffered from mental health made him come up with the idea of MENTOR360. We were just discussing it, and I really thought it was something that was genuinely worthwhile because of how much help it could offer people, so I wanted to get involved. The vision is for it to be accessible to as many people as possible, from children to people who are entering old age, because I genuinely feel MENTOR360 is something that can guide you through life and it’s never too late to have something or someone there to help you through difficult times.

What do you do to keep your mindset in as best a place as possible?

The best thing for me is routine, that doesn’t mean it’s a set routine, I mean a flexible routine so if something happens which means I can’t stick to a certain routine I’m not phased by it, I adjust it and still keep myself in a routine. The routine will involve, healthy eating, positive good habits such as getting up early, doing exercise regularly, generally just giving my own mind the time it deserves to explore certain emotions if I’m feeling negative about something and that in turn puts me on the path to getting myself back in a positive mindset.

As well as your exciting new MENTOR360 venture, many will know you for your multiple TV appearances, including the TV hit SAS: Who Dares Wins and more recent Foxy’s Fearless 48 Hours where you took celebrities out of their comfort zones, for scary physical challenges. One of these celebs just happens to be Maya Jama who we recently interviewed for Student Pocket Guide. What was it like to work with her?

You know what, I went into the Maya episode with apprehension because I was worried there would be very little we would have in common. It actually turned out that we had a great laugh, she’s a very easy going person, she was up for doing anything even though she was absolutely petrified at times, and I really enjoyed the 48hrs I spent with her.

It was a fascinating experience. It gave a bit of content to the war on drugs for me, which I have lots of different opinions on. It was also very scary, because ultimately I’m there in a different capacity to what I was before – unarmed, without the backup of an entire military operation behind you. I was there to speak to and find out about people who probably just want a bit of attention, so as long as we played things right, which we did, because I’m still here, we were going to be fine. And it was all about relationship building, some of those skills I leaned in the Special Forces.

Throughout your career, you’ve travelled to many places around the world – where in your opinion is the most beautiful place on the planet?

It’s difficult, because I love the jungle, but it’s not beautiful, it’s raw. I love the desert but that’s not beautiful because it’s just boring, but in a nice way. It’s probably the very north west of North America. So Canada, Alaska. I did a trip to the Yukon where I canoed the length of it and that was pretty awesome.

What is a perfect day for you?

Get up nice and early. Take a cold shower, I love a cold shower in the morning now. Then Coffee, breakfast, a decent training session, bit of work then home, dinner, Only Fools and Horses and then bed.

What’s next for Foxy during 2022 and beyond?

Foxy Life at the Limit Tour, starting in January with over 30 dates. Hopefully filming more SAS, and of course the one we have just filmed will be airing. I have a few other projects bubbling away, hopefully they’ll come off but you never know, and I’m writing another book.