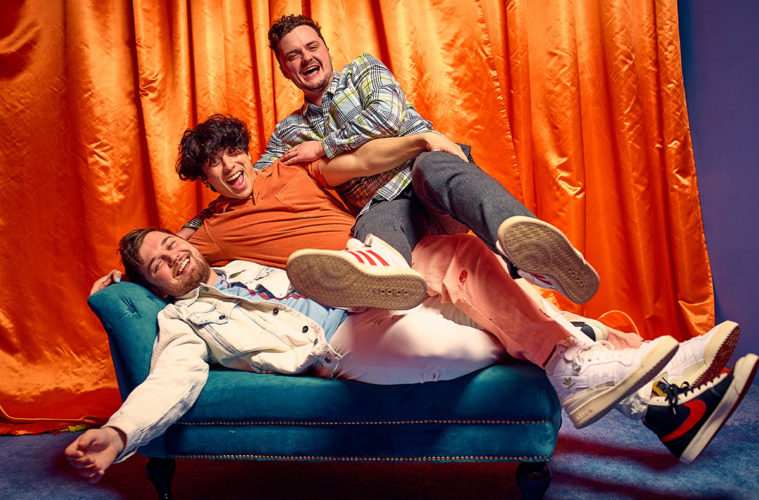 A Conversation with The Happy Fits

The Happy Fits, an Indie Pop band from New Jersey join The Student Pocket Guide in conversation. We discuss album news, their new music video for ‘Dance Alone’, touring in Europe and more…

Hello The Happy Fits! Awesome to chat with you for Student Pocket Guide. Thank you so much for joining us. How are you today?

Just got back from Bottlerock Music Festival in Napa, California playing the largest crowd ever for us, so pretty peachy!

So lately you’ve generated some buzz with your new singles, ‘Changes’ and ‘Dance Alone’. Fans are wondering, can we expect to hear any album news soon?

Yes! Super soon. Some say a matter of days…. Perhaps even hours!

Speaking of fans, you invited a number of them to feature in your new music video for ‘Dance Alone’. How was that experience?

It was super awesome! Shoutout to Shelby from our label who got us in touch with Cameo who let us use their Beverly Hills mansion. Seeing all the fans’ faces as they walked in was super rad – it was probably one of the nicest homes we’d ever stepped foot inside!

I have to admit, I really enjoyed both the music videos for your new singles. Completely related to using music to liven up your chores in ‘Dance Alone’ and the sense of life’s overwhelmingness in ‘Changes’.  Do you have a favourite video of the two?

“Changes”! It’s always the best to be able to come up with an idea and direct, edit, and execute it yourself. We did the same with our “Go Dumb” music video which has to be our favorite of all time.

And you mentioned that ‘Dance Alone’ somewhat refers to the loneliness of quarantining in the pandemic. How did you guys spend quarantine?

We spent a lot of time live-streaming! Some of it was live music while other times we’d play Jackbox Games with the fans or Stardew Valley. In the latter half, we were super busy writing and recording our 3rd LP.

Definitely. You wouldn’t tell from our live shows but off-stage I’m [Calvin] incredibly socially anxious. I can barely hold up a conversation because there’s always a flurry of thoughts running through my head.

This one might be a little off topic, but the three of you made the very bold move of dropping out of college to pursue this band. What was that period like for you, were you scared?

We were just naively excited if anything. Our naivety was an asset for a long time since I don’t think any of us really realized the amount of work it really takes to be in a successful band. Ross’ parents helped us out a ton by letting us practice at their spot.

And finally, you have a tour in Europe and the UK coming up. Have you toured internationally before? And do you have a city you’re most excited to visit?

We’ve played a handful of shows in Canada but never in Europe. I [Calvin] think I’m most excited to see London! Our good friends from Charlotte Sands & company were just touring over there with My Chemical Romance and said London was the coolest city they’ve been to.
You can check out The Happy Fits’ new music video for ‘Dance Alone’ now.
The Happy Fits Interview | New Music Video ‘Dance Alone’ Out Now | Photography by Rahil Ashruff