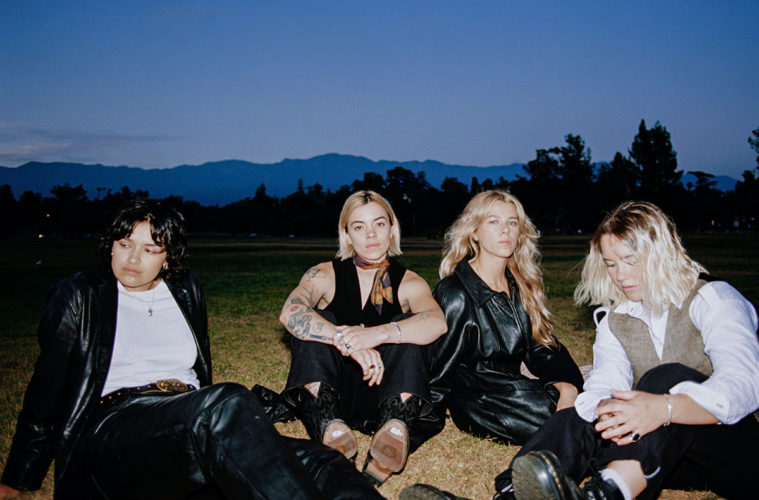 Queer Anthems on Heartbreak: An Interview with The Aces

Following the release of their latest single and music video, ‘Girls Make Me Wanna Die’, we chatted with The Aces, an indie-pop quartet from the States. We discussed their musical inspiration growing up, the evolution of their queer identities and more.

Interview with The Aces by Jenny Medlicott. Photography by Adam Alonzo. New single ‘Girls Make Me Wanna Die’ out now.

Hey all, great to chat with you today. Thank you so much for lending us some of your busy time. What have you been up to lately?

We’ve been playing a bunch of Pride Festivals around the U.S. and we’ve been jamming out to our new song “Girls Make Me Wanna Die.”

So, I’m going to come clean and admit I actually had a bit of a stalk of your TikTok account earlier. I saw in one of your videos you recreated a photo from when you were all younger, and it got me thinking about how your journey as a band started when you were kids. I wondered, if you could go back and tell your younger selves one thing about the journey ahead of them, what would it be?

Trust your intuition and don’t take yourself too seriously.

Have fun. Make it fun.

What sort of artists did you draw inspiration from when you first started out?

We drew a lot of inspiration from ‘80s disco pop. It was largely what our parents played us growing up. It was a mix of that and some ‘80s new wave. I think we were so influenced by the ‘80s. Our parents were teenagers and in their 20s in that era, so naturally they played that stuff while we were really little, and it was some of the first stuff. Bands like Paramore were big influences for us as kids. Their music videos. That was good for us too. Paramore was just exploding when we were in elementary school. I remember watching the “crushcrushcrush” music video and losing my mind. We all loved Hayley Williams so much.

I’m super close with my siblings, so Cristal and Alisa I have to ask, what’s it like being in a band with your sibling?

Pretty crazy! It’s a beautiful tornado. It’s a lot of fun and it can also be ugly.

It’s so much fun. It’s really the best. All of us in the band, we’re so close. We’ve been in the band for so long, it feels like we’re in a band with our sisters. It’s really fun for the most part. Definitely challenging at times, but a beautiful tornado nonetheless!

In your first album, you avoided using gender pronouns. But that’s massively contrasted now with your latest single, ‘Girls Make Me Wanna Die.’ How do you feel when you look back and see how far you’ve come in embracing your queer identities?

I think we’re definitely proud of ourselves. I think it was something that came naturally with age because we made that decision when we were younger. We were so young and still figuring out our sexual identity. As we got older it became more solidified and therefore easier to express through the art and talk about. It’s just a natural, coming-of-age thing.

Last but certainly not least, any idea when we can expect to hear some updates on a new album or maybe a tour?

In the near future. 2022 is full of announcements.

See you on tour with Why Don’t We over the summer in the States!

Interview with The Aces by Jenny Medlicott. Photography by Adam Alonzo.