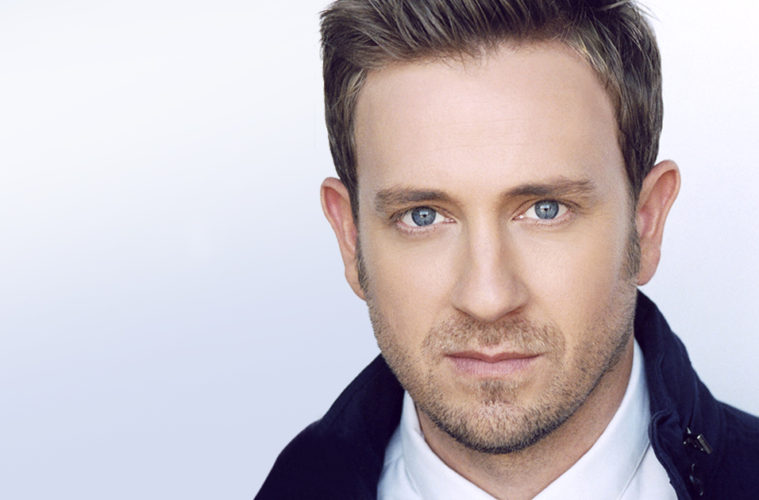 Tom Lenk, once known for playing Andrew Wells in Buffy the Vampire Slayer and its spin-off Angel, now a stage actor lauded for his performance in Tilda Swinton Answers an Ad on Craigslist. We caught up with Tom about his upcoming show Lottie Plachett Took a Hatchet, which will be taking the stage at this year’s Edinburgh Fringe Festival.

Hey Tom, thanks so much for chatting with me today! My friend who’s a Buffy fanatic was so stoked when I told her I was going to be interviewing you, which has bounced right off me. How’s it going?

Who’s your friend? Tell her hi! And I love all this bouncing for you. You’re like a human bounce-house of good vibes. I’m totally into that. No literally, if you were a bounce-house at a carnival I would totally pay at least 1 – 2 pounds to bounce on you? Curious what shape of bounce-house you are? A traditional yellow and orange castle moment? Giant Tiger? Or are you like that awkward crouching spiderman bounce house?

It’s been 19 years since the final season of Buffy aired, can you catch us up on your favourite moments since then?

Who loves her kids and never stop

With gentle hands and a heart of a fighter

I’m sorry, those are the lyrics to the American sitcom “Reba” starring Reba McEntire. Was that show popular in the UK? I hope so. Because Reba, is truly a gift to us all. I once met her in Mexico on the set of Barb and Star Go To Vista Del Mar, wherein she plays the role of TRISH. I am friends with her makeup artist Brett Freedman who introduced me to her and let me tell you, SHE IS RADIANT. Friendly and effortlessly charming. Brett mentioned to her that I was departing for the Edinburgh Fringe Festival directly from there (to perform our 4 star-rated-by-the-Guardian-show, Tilda Swinton Answers an Ad on Craigslist) and I started blathering on about how fun it is and the exhilarating and exhausting aspect of performing every single day… “Oh, well, 7…8 shows a week, it’s intense, but wonderful – of course YOU know what it’s like, Reba (remembering that she starred on Broadway in Annie Get Your Gun).” She gave me a knowing nod and gentle tap on my shoulder in a way that only peers do. That’s right, apparently I think I am on some sort of REBA LEVEL?! Am I an insane person? The answer is yes.

So, your upcoming role is in Lottie Plachett Took A Hatchet, which I’ve got to say sounds hilarious, how would you sell the show to people hearing about it for the first time?

It’s a hilarious, raucous, campy, queer parody of the Lizze Borden story, but like if the Muppets were doing a production of the Crucible? Does that make sense?

You’re returning to Edinburgh Fringe for the show, a city I personally love. I’m going to put you on the spot now, how would you rank Edinburgh compared to all the other locations you’ve visited for work? Do you ever have trouble with the Scottish accent?

I’m obsessed with Edinburgh and will be actively pursuing single Scottish gentleman to propose marriage to in an attempt to A. Find true love B. Start a new life as a citizen in Edinburgh where I own a small coffee shop in a lovely historical building that has a small performance venue upstairs wherein I curate year round fringe acts? And I don’t have trouble with the Scottish accent. In fact I would like to get into MORE trouble with the Scottish accent if you know what I mean?

If you had to pick the fanbase of any TV show as your audience for Lottie, what TV show would you pick?

Not just because I appeared last season on the American Horror Story spinoff American Horror Stories, but because both of those shows incorporate a fun level of camp and comedy into the horror genre. The Coven Season of AHS comes to mind. We have some similar BALENCIAGAAAAAAAH vibes in our show.

What kind of costumes can we expect to see in the production?

Got to admit, I’m kind of nervous about the mention of a toilet instillation in the show, dare I ask how that’s going to play a part?

Well, historically during this time, America was transitioning from the use of outdoor “privies,” to a new invention called the toilet, which was terrifying and disgusting to many conservative folks who believed that that type of “business” was meant to stay outside. The use of indoor facilities was un-christian like and would bring death and destruction upon their households. Huh. It’s almost like conservative christian Americans really like to prevent society from forward “movements?”

On an unrelated note, it’s been years since Buffy endedbut the fandom seems very much alive and well. I wondered how you feel looking back on the show now?

Looking back at Season 6, I really wish I had not been giving myself those highlights. And Season 7, I really wish I hadn’t been paying a professional Hair stylist to give me those highlights. But I stand by the fauxhawk and my timely obsession with David Beckham. As far as the fandom goes, I love how passionate they are! And I’m just waiting for some of them to become showrunners of TV shows and realize that some of us sidekicks deserve some of that main character energy right now. Heeeey. Whaaat. Whooo meeeee?

Are you still in touch with any of the Buffy cast?

Yes! In fact, Felicia Day and I have a podcast called “Undressing with Felicia Day and Tom Lenk” where we “undress” our favourite shows including Bridgerton and The Witcher! Listen and subscribe wherever you get your pods!

And finally, any big plans for the future – dreams, desires, wishes?

Scottish husband. Coffee Shop. OH, I would really like to solve murders in a scenic environment both in real life and on TV. Vera, can you hear me? Shetland?! Agatha Raisin? Did I mention I basically only watch British Murder shows? I’d love to get Tilda and Lottie touring the UK and even the West End!