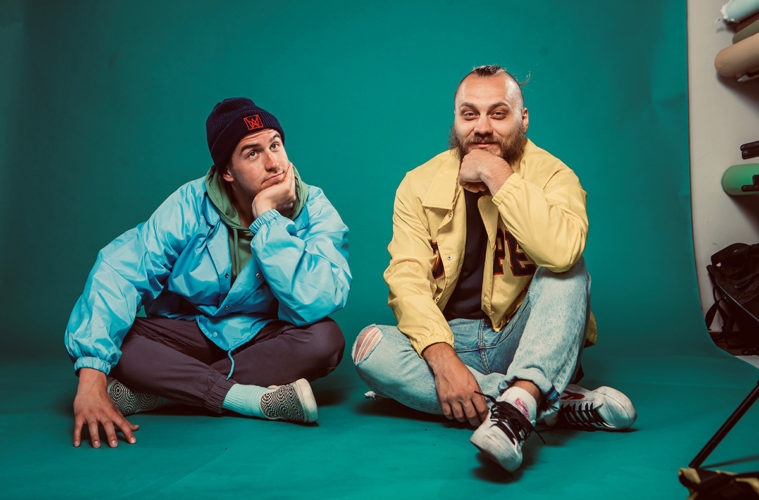 We caught up with James Priestner, lead vocalist (and guitarist) of Rare Americans, a band that “started on a whim”, and are already making big moves! Their fourth studio album “You’re Not A Bad Person, It’s Just A Bad World” is being released 21st October and is available to pre-order now. We caught up with James to talk about all things Rare Americans, their new album, the story behind the band, and how they’re expanding their “animated universe with a couple huge projects in development”.

For those that aren’t yet aware of Rare Americans can you please introduce yourselves and describe your sound?

I’m James from Rare Americans, and we are from Vancouver, Canada! We have a very mixed sound, never the same song twice. We pull inspiration from punk, hip hop, and indie.

I really like what I read on the “about” section of your website where it mentions (James) joking about writing a song, and this leading to writing an album! ‘You’re Not A Bad Person, It’s Just A Bad World’ – can you talk us through what the album represents?

This album is kind of a rally call that despite the world being in a very strange place right now, keep your head up, you are probably doing just fine even though it feels like a very polarising time. I’ve found myself teetertottering on all the various issues that have been sensationalized in the media since the pandemic. It’s like you must choose a hard side for everything, you’re either one of us or one of them. The issue is both sides of the arguments have “facts” and “studies” and a whole lot of fake news! Just a weird time in the world.

Which one track from the album are you most proud of and why?

Tough question. I’ll give you 3 ha! I think Run The World is a very unique song musically. A dope riff, strings, cool vocal textures. I find it’s a song you can listen to several times and not get sick of. Moving On I feel is just a solid song top to bottom. It’s very simple and relatable, often those are the best songs. Lastly, Carson because it’s the most deep by a country mile. That song is a true story about a 14-year-old boy who lived near us who was bullied into taking 12 pills of ecstasy so he could be filmed and made into a meme when he started losing control. What those kids didn’t realise is that dosage can be fatal, and that’s exactly what happened. Just a horrible, horrible story that punched us right in the heart. We wanted to make a song about it to spread awareness in hopes that if any of our fans every found themselves in a similar situation that they would tell someone. They would ask for help.

What was the writing process like for this album in terms of inspirations, how long it took and where you were when you wrote the majority (or all) of it?

This record is actually a collection of songs old and new. I dug through my iTunes library and looked back at a bunch of older songs that we probably overlooked when making our 2nd and 3rd albums. I started to realise a lot of these songs were solid and presented similar themes and I wanted people to hear them. Sprinkled with some new songs we’d written, it felt like a complete thought.

What excites you more, producing or being on the road touring?

Great question. Both are total thrills, just completely different experiences. Being on the road is like a test of willpower. It feels more like you are a professional athlete than an artist. It takes a toll on your body, you have to bring your “A” game every night even when you are exhausted, but there’s few adrenaline inducing experiences like it. It’s just super, super fun. Recording is a lot more creative and I enjoy that. Every day you don’t know what you’re going to get, what idea might pop into your head, what direction a song could take by making one change. It’s a really enjoyable process. If I had to choose, I would probably pick recording because at my core what I love to do is create. I think you need both, or you’d get sick of doing one or the other all the time.

As a new band, how have you found the journey so far?

A roller coaster ride of emotions! If you want to be a band in 2022, you have to be willing to absolutely grind. We are independent so our small team is really doing everything from writing, setting up recording sessions, listening to mixes, marketing the album, managing social media, doing our accounting, making merchandise, and deciding on tours. It’s not for everybody and it’s a job that’s very difficult to “shut off” when the work day is over. I am thinking about the band pretty well all day, every day. However, despite the grind, the fact that we are making a difference in the lives of tens of thousands of kids around the world is the most rewarding vocation I can imagine.

How are you all getting on? Anyone got any annoying bad habits?

As a whole, we get along great. Does everyone have their off days? Of course. Especially on the road when you’re living in tight quarters for months at a time. But at the end of the day, we all respect one another and everything can be sorted by communication.

Who in the band would you say is the rarest American, and why?

Ha! Good question. Probably Lubo. We love him to death, but he’s an odd duck man (in the best way!). He just marches to the beat of his own drum, is very confident in his opinions about the world and doesn’t often second guess himself. I admire that in him.

What were you all doing before you founded Rare Americans?

I was in audio engineering and music production school as well as working in the car industry. I sold cars, then sold finance, and ran a large customer service/sales department. Lubo was washing windows in high rise apartments, literally like 200 feet in the air, it always freaked me out. Jongo was working for IBM, and Duran was working on cruise ships playing drums. 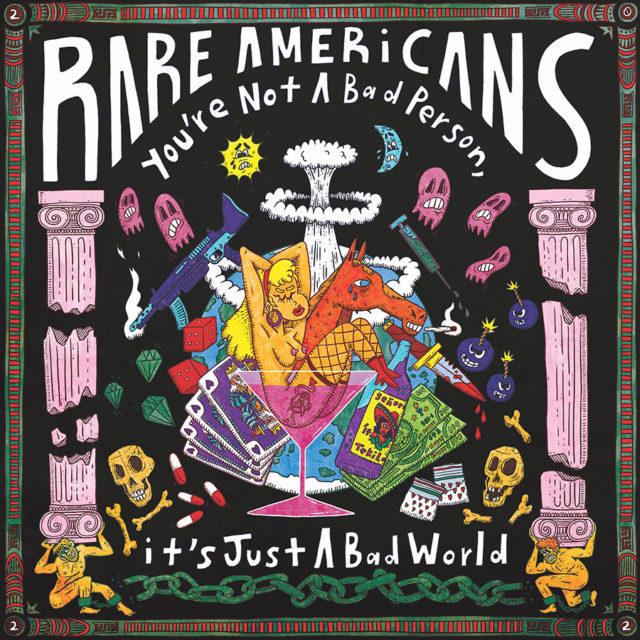 I was really impressed with the brand image you guys have created. Your artwork is superb and you’ve got a nice merch line, too! I can imagine fans getting your artwork tattooed it’s so cool (maybe someone already has?). I can also imagine some really cool cartoons with the characters you’ve created. What’s the story behind the artwork and the future plan for your brand identity?

Nice question. Animation and art has been a huge part of our brand since day 1 and its something we pay a lot of attention and put thought into. As merch typically makes up 50% of a bands revenue, you have to be thoughtful about it, have great products, and even better customer service. It’s taken us time to develop this business as its complex selling and fulfilling internationally but I think we’re in a great place now with the partners we’ve lined up. Several people have gotten tattoo’s which I’m still shocked by every time we get tagged in a picture, but damn it’s like the ultimate honour! We are expanding our animated universe with a couple huge projects in development: a TV show, a film, and a punk rock musical. More to come on that early next year.

What’s been the highlight so far for Rare Americans?

Definitely meeting the kids at the shows. Just seeing the impact our music has had on these kids is incredible. I love meeting them, hearing their stories, and seeing them sing the lyrics at shows. Hard to beat that feeling.

To wrap things up, can you tell us a funny story from being in the band or share a secret most people don’t know?

Well, we are called Rare Americans and none of us are actually American. Two of us are Canadian, and the other two are Slovakian! People often ask why we chose the name. I say well we’re Canadians, who also live in North America, so by default we’re like the cool version of Americans, the “Rare” Americans 😉