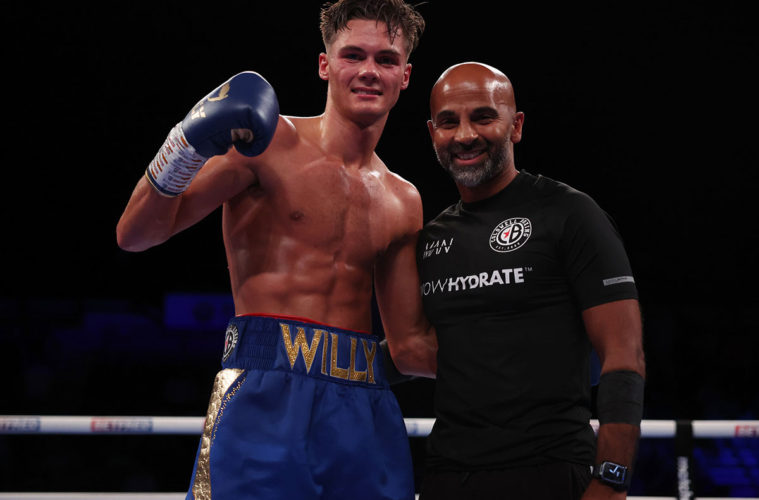 Former professional boxer, boxing promoter, trainer and pundit Dave Coldwell talks to us about getting into the sport, his successful career, upcoming stars and his future plans.

What initially attracted you to boxing when you were younger?

I was bullied as a kid at school and was experiencing a rough time at home as well and I saw boxing as a way to protect myself. I wanted to start at the age of 10 after watching Sugar Ray Leonard and Mike Tyson on TV but my mum wouldn’t let me.

It wasn’t’ until I was 15, and two day after the first Eubank v Benn fight, that I first went to Brendan Ingle’s gym in Sheffield, and I was hooked from then on.

As a fine-tuned former professional boxer having worked as a boxing promoter and now a boxing trainer, who would you consider the top 3 greatest boxers during your lifetime?

Sugar Ray Leonard. He is one of my all-time heroes and the first person I saw fight on TV.

Floyd Mayweather. He was a master at what he did.

Vasiliy Lomachenko. He is a genius. As I get older my appreciation for boxing has changed. As well as pure physicality, I now also look at technique and mentality, and Vasilily is another level.

In your opinion are superstar boxers just born with it, or can world-class ability be developed by an average fighter with the right team?

It can certainly be developed. If any athlete is willing to learn and be dedicated, they can improve and become world-class. You don’t need to look like a superstar at first to become a superstar.

Can you name 3 upcoming boxers you have your eye on?

Hopey Price. Maybe I am a little bias as I work with him, but that means I know him inside out. He has it all and I’m convinced he is going to be a star of the sport. He will win World title and go up through the divisions.

Shakur Stevenson. He is probably already well on his way to becoming a star, but I believe he is going to dominate the sport and be a huge superstar.

Ben Whittaker – From watching him spar, and after seeing him in the amateurs, I really rate him. If he can transfer those skills across, I think he will have a fantastic career. He also has that crossover appeal, but with him it will be managing that and keeping grounded. He has a big personality, but so long as he has the right attitude and works hard behind closed doors, it will be very exciting to watch him grow.

You’ve trained some true champs including the likes of Tony Bellew, David Haye, and Derek Chisora. What we’d like to know is have you every trained someone who is just generally difficult to work with?

Hahaha. Yeah, I have but I can’t name names.

What’s your opinion on the newbies entering the sport such as Jake Paul and can you see him fighting Chris Eubank Jnr?

My initial reaction is that I don’t really care. I understand that anyone who wants to box had the right to give it a go but I don’t like him fighting basketball players and then talking about fighting the likes of Canelo etc. You need to start at your level and work your way through. Have meaningful fights before calling people out.

I guess Jake Paul can’t really lose, because he doesn’t have a legacy to uphold. Would you say this is a smart move by Chris Eubank Jnr or is there a slight risk on his behalf, in your opinion?

It depends what level you are. If you’re a decent level, you will beat him, there isn’t really any risk. If you are on similar level, and only a few fights into your career, you could struggle. But you will get paid really well, and your profile will get lifted, so it’s a good business opportunity. But for Eubank to be talking about GGG and world titles to then to talk about Jake Paul is embarrassing.

Boxing nowadays seems to get more creative out of the ring. Recent tactics from the likes of Tyson Fury to fight AJ for free is an example of this. Can you see that fight happening, and if so, who do you think wins?

Talk about fighting for free is rubbish, no boxer will fight for free. If AJ beats Usyk then I think it will happen, if he loses, probably not. Who wins.. ask me after the AJ v Usyk fight.

As someone yourself who is no doubt in tip-top condition, how often do you train these days, and having to be in prime condition how do you celebrate any victories?

I train 5 days a week. My sessions include a lot of core work, mobility work and plyometrics such as static and voicing jumps. I will then do two supersets with heavy weights working the main muscle groups.

I do celebrate, but I am straight back in the gym on Monday morning with my other fighters, so never take it too far. I also don’t drink, I haven’t had one since, I think, Bellew beat Haye for the second time. 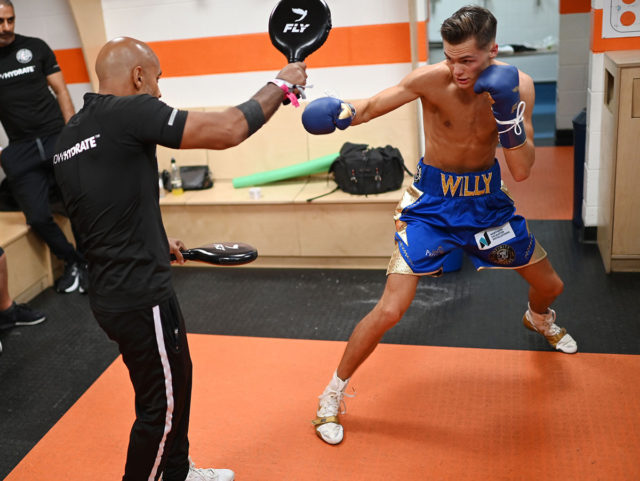 Looking back at your successful career, what would be the stand out moments for you as a pro boxer and trainer?

As a boxer, it was when I knocked out Terrance Gaskin at the Doncaster Dome in 1999. As a coach, there are so many but these are probably the top three, so far…

Jordan Gill winning at O2 last time out against Karim Guerfi. Jordan looked to be down and out but what people don’t see is the training and preparation that went in to that fight, and how we had a strategy if the fight went that way, which Jordan executed perfectly.

You also make regular appearances as a pundit.  What are your future career plans?

I think I will be a coach for about another 10 -13 years, which will take me to 60 year old. Hopefully I will have more TV and radio work during that time and after. I really enjoy that side of the business.

What advice would you have for someone who is young and interested in the sport but no idea how to take things forward?

Find somebody or a team that are like minded and interested in developing you and getting the most out of your ability.

Don’t listen to anyone telling you that you can’t do it.

Work harder than anybody else. Live the life, be dedicated both on and off the pitch. Live your life for you and live your dream.