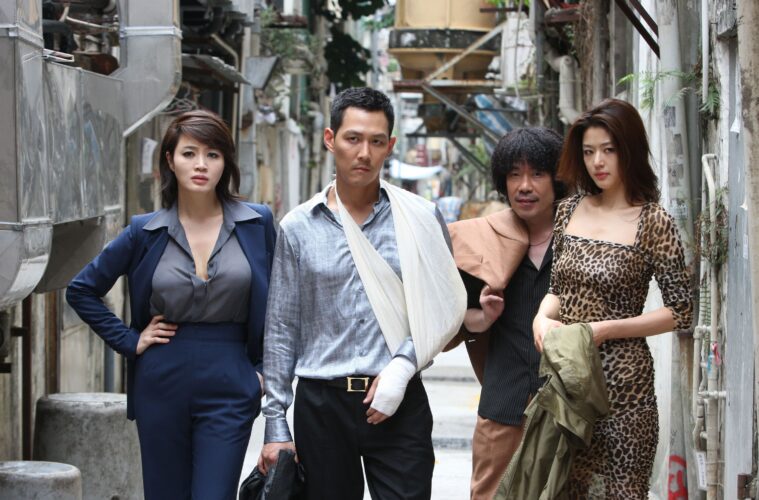 With the biggest programme dedicated to Korean cinema outside of the country itself, the exciting programme includes 35+ films across strands including Cinema Now, Special Focus, After Dark: K-Horror, Indie Talents, Women’s Voices, Documentary, Shorts and Artist Video.

Kim Han-min’s follow up to The Admiral: Roaring Currents (2014), the naval warfare blockbuster that remains the most successful Korean film of all time, Hansan: Rising Dragon closes the festival on 17th November at Regent St Cinema. The gala screening is followed by a Q&A with Kim Han-min. The prequel returns to the legendary exploits of Joseon Era admiral Yi Sun-sin and, teeming white knuckle tension, steers us through an impeccably realized and epic David-vs-Goliath struggle out in the open sea. The Admiral: Roaring Currents also features as a Special Screening earlier in the programme.

As part of the London Korean Film Festival collaboration with the V&A exhibition Hallyu! The Korean Wave, Choi Dong-hoon’s crime caper, The Thieves features in the special screening programme. One of the region’s largest co-productions with a fantastic Korean and Hong Kong ensemble cast, including Squid Game’s Lee jung-jae, and a gripping high impact caper story, The Thieves is one of the biggest grossing films in Korea’s box office history. The special screening is followed by a Q&A with Choi Dong-hoon and a reception at the V&A.

Among the Special screenings is Kore-eda Hirokazu’s Award Winning Broker – one of the year’s most highly acclaimed films, The whimsical and beautifully crafted film played in competition at the 2022 Cannes Film Festival and won Song Kang-ho (Parasite, The Host) a Best Actor award at Cannes – making history as the first Korean actor to do so. The screening is followed by a Q&A with the film’s translator Darcy Paquet.

Cinema Now offers an exciting range of films from the past year, the very latest in Korean cinema. Jeong Ji-yeon’s mesmerizing psychological thriller The Anchor plays out its genre tropes to dizzying perfection, while also addressing the inequalities and traumas which women both face and hand down in Korean society. The screening is followed by a Q&A with Jeong Ji-yeon at Picturehouse Central. In the riveting Return To Seoul, which premiered at the 2022 Cannes Film Festival under the Un Certain Regard section, director Davy Chou centers on a woman searching for her identity, inspired by the real life experience of Chou’s friend. The protagonist is played by Park Ji-min in a critically acclaimed breakthrough performance. Byun Sung-hyun’s Kingmaker is a saga of aspiration and ambition set during the dictatorship era of 1963-1979 and is powered by two excellent performances by Sul Kyung-gu (The Book of fish) and Lee Sun-kyun (Parasite). Hot Blooded is the long awaited directorial debut by acclaimed novelist and screenwriter Cheon Myeong-kwan and is a norish tale on the tribulations of a gangster in a multi-layered performance by Jung Woo. In Stellar: A Magical Ride, director Kwon Soo-kyung embarks on a comedic road chase fueled with nostalgia and charm. Romance gets a second chance in Director’s Intention by Kim Min-geun with a location scout and a film director taking a trip down memory lane.

London Korean Film Festival presents a widely and feverishly appreciated genre, rooted in psychological and emotional reality, with its After Dark: K-Horror strand. Park Kang’s intense, ambiguous feature Seire (the 3 week confinement period for mother and newborn) is a subtle, serious, slow-burn exposé of one man’s inner psyche, both waking and dreaming. Drawing liberally (if dynamically) on both Stanley Kubrick’s The Shining and Kim Jee-woon’s A Tale Of Two Sisters, Contorted by Kang Dong-hun places a child in harrowing peril and concerns a house and a family both haunted where mental illness and domestic history merge into one. Set in a community centre where a mass murder took place, Guimoon: The Lightless Door involves a paranormal investigator who discovers a door to another world in a wild, bewildering and increasing frantic ghost train of a ride by Sim Deok-geun. The Fifth Thoracic Vertebra by Park Sye-young is a melancholic, monstrous, experimental horror dealing with a creature’s need to feed but also sets human drama and dreams against an irrational canvas of nature. Park’s short film Cashbag is programmed alongside and follows a man in a series of nocturnal transactions ending always in a similar waterside location.

Female filmmakers and talent continue to be front and center of the festival in the dedicated Women’s Voices strand. A Women’s Voices networking event launches the strand ahead of the screening of Kim Jung-eun’s Gyeong-ah’s Daughter on 13th November. The screening is followed by a Q&A with Kim Jung-eun at Cine Lumiere . Other powerful and thought provoking titles within the strand include Byun Gyu-ri’s Coming To You on two mothers coming to terms with their children’s sexuality and join the ‘Queer Children’s Parents Club’. In collaboration with the Seoul International Women’s Film Festival, the following films have been selected: Bae Cyan’s auto-fiction documentary Dear Chaemin, which examines violence against queer communities in Seoul and among Asian communities in Europe; Yang Yoon-jung’s school drama Special Scholarship which deals with fierce politics among students of different demographics; Jeon Chae-lin’s Dear Kimsisters in 1959 that takes a look at the impact and influence of the popular The Kim Sisters female pop group at the height of the Cold War and the provocative Nipple War 3 by Paek Siwon sets out to question Korean society’s views on women’s bodies.

The programme includes a Special Focus strand dedicated to internationally celebrated, acclaimed actress Kang Soo-yeon. Beloved within Korea as a young actor, Kang became well known on the international stage with her breakout role in Im Kwon-taek’s The Surrogate Woman in 1987. Kang won the Volpi Cup for Best Actress at the 44th Venice International Film Festival for her role, making her the first Korean actor to receive an award at a major international film festival. Considered a national treasure, Kang passed away on 7th May 2022 of a cerebral hemorrhage at the age of 55.

Additional Kang Soo-yeon films at the festival include Come Come Come Upward (1989), for which she won a Best Actress Award at the 1989 Moscow International Film Festival; The Road To The Race Track (1991) for which she won multiple Best Actress Awards at Asian Film Festivals; Girls’ Night Out (1998) which showed her comedic talents; and Rainbow Trout (1999) which won the Special Jury Prize at the Tokyo International Film Festival in 2000.

Founder and former chairman of the Busan International Film Festival, Kim Dong-ho and Director of the Korean Film Archive, Kim Hong-joon will be participating in the Forum event dedicated to Kang and the Korea’s cinema landscape of her era. Kang was the co-director of BIFF from 2015-2017. Both Kim Dong-ho and Kim Hong-joon will be participating in Q&As following the screenings of Come Come Come Upward and The Road To The Race Track.

The Documentary strand features The 2nd Repatriation by Kim Dongwon focuses on political prisoners living in Seoul, who still hope for repatriation to North Korea. The film is a follow-up to the director’s 2003 documentary Repatriation about the 63 long-term ‘unconverted’ political prisoners repatriated to North Korea in 2000. Also featured is  Melting Icecream by Hong Jinhwon, a documentary based on archival footage and  I Am More is a fascinating study of ‘life as a stage’ by Lee II-ha as he depicts the life of More (Mo Jimin) a popular drag artist.

Indie Talents showcases new and emerging filmmakers and includes Lee Ji-eun’s The Hill of Secrets (2022 Berlinale, Generation Kplus Competition) on a young girl caught between two conflicting worlds, played by Moon Seung-a, one of Korean cinema’s most exceptional child actors. Hot in Day, Cold at Night (2022 Berlin International Film Festival, Forum) might appear to be a depressing tale of economic hardship, but filmmaking-screenwriting duo Park Song-yeol and Won Hyang-ra – who also play the leading roles – have an entirely different tone in mind. Although not quite a comedy, the film’s finely-calibrated blend of sardonic humour and touching vulnerability have made this one of the year’s most talked-about Korean independent films. A quietly observed film with strong resonance, A Lonely Island in the Distant Sea by Kim Mi-young is a thoughtful consideration of a man facing the unexpected. Through My Midwinter, Oh Seong-ho’s debut feature, deals with a relationship under pressure and is made vivid by the performances of Kwon Da-ham and Kwon So-hyun (a former member of K-pop group 4Minute) as the stressed but sympathetic couple.

The Jeonju Shorts strand consists of a selection of shorts from this year’s awards winners (in the Shorts category) at the Jeonju International Film Festival including In The Dry Stream by Kang Ji-hyo, a subtle and poignant tale of childhood dreams that must make way for unhappy adult realities. Wunderkammer 10.0 by Ki Yelim, Park Soyun and Jung Inwoo, part science fiction, part social commentary, part art installation, this short is both a mystery and a manifesto. Moon Hyein’s Transit tests the bonds of friendship in light of gender transition. Students seek freedom and revenge in Yoo Jongseok’s Light It Up at 2AM. Framily by Kim In-hye deals with the complications of family ties and how they can strengthen in adversity. Paek Siwon’s Layers of Summer contemplates if unrequited love can be rekindled. 29th Breath by Kook Joong-yi focuses on an aspiring actress who keeps getting cast as a zombie and struggles to keep her dream alive – with dramatic consequences. In Kim Min-ju’s Trade, the lives of two very different, troubled people collide and they strive to outwit one another for their own again.

In the Artist Video strand, LUX and the London Korean Film Festival join forces to present the first UK solo exhibition by Korean artist Yun Choi, who collects images, words and behaviors marked by Korean banality and remixes them for her videos and multimedia installations, tracing collective belief and reverie that underlie absurd socio-political phenomena. The exhibition at LUX presents two films that explore language as a bodily experience: the latest rendition of Choi’s film Where the Heart Goes_Poetry Collection (2022), and Viral Lingua (2018), a collaborative film made with Minhwi Lee.