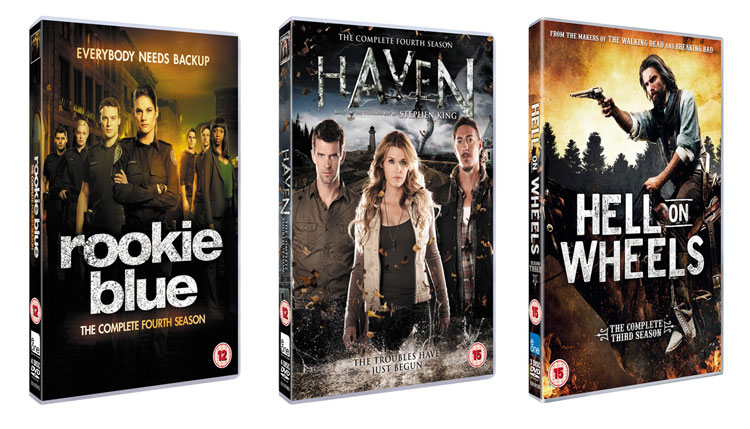 To celebrate the release on DVD of three of the best TV series right now, we are offering you the chance to win a copy of all three!

Haven, Season 4 (out to own September 8th)

The thrilling Haven is back and life may never be the same again for the towns supernatural residents… Picking up six months after Audreys (Emily Rose) disappearance at the end of Season 3, a lot has changed in Haven with the town in disarray and overrun with paranormal phenomena.
Pre-order here.

Former soldier Cullen Bohannon (Anson Mount) is back and with a new mission in mind. Abandoning his quest for revenge for the deaths in his family, Bohannon takes up arms against Durant (ColmMeaney) and along with Elam (Common) travels to New York to take control of the Union Pacific Railroad. Blood will be spilled, lives will be lost and men will be ruined in what promises to be the most thrilling season to date.
Pre-order here.

Rookie Blue, Season 4 (out to own September 1st)

Season Four begins six months after Andy (Missy Peregrym) and Nick (Peter Mooney) leave for their undercover operation. We return to 15 Division with them – and quickly realise that everything seems to have changed. But that’s what being a cop is, right? Adapting to new situations, rolling with the punches… change is constant, and if you don’t adapt, you’re left behind. So when Andy returns to find that Sam Swarek (Ben Bass) is now a Detective and that he’s moved on, both professionally and personally, she’s going to have to figure out how to adapt.
Pre-order here.