Morning Parade are a five-piece indie rock contingent hailing from the county which has enlightened the British public with Amy Childs and co. Tipped by many to burst onto the scene this year with the release of their eagerly anticipated self-titled debut album, the band are a rarity in the sense of what they have achieved with their sound; a dazzling combination of guitar presence and atmospheric electro; proving themselves to be a valued discovery by label giants Parlophone. We caught up with front man Steve Sparrow, who shed light on their upcoming tour and MTV appearance, whilst rigourously assessing which band member would be what animal!

Hi Steve, how are you?
Yeah not bad mate, just on the move at the minute so if I break up a bit I apologise!

Ah no worries! I hear you guys are actually building your own studio?
Yeah we’re kind of in-between at the moment. We had our own studio for the best part of a couple of years when we were making our first record and we’re about to move into somewhere new. We’re actually hiring at the moment which is a bit like going back in time; there’s a couple of metal bands that come in and scream in the studios next to us!

Nice! A couple of you guys were labourers before the band took off am I right?
Yeah, it was kind of a means to an end. It was in-between graduating from university and setting up the band. We’d got to a point where none of us could hold down a job because we were always touring and gigging so we just did what we could to get by in the meantime. Then the label came along and gave us a record deal!

So, with building your own studio, is it the aim to get to a point where you very much produce your own music and do things yourself?
Erm… We always welcome an outside perspective, you know, whether it be from our management or people we work with, such as a producer. I think it will be more of a place where we can get ideas together and build a bank of songs and ideas, which will hopefully take things to the next level. 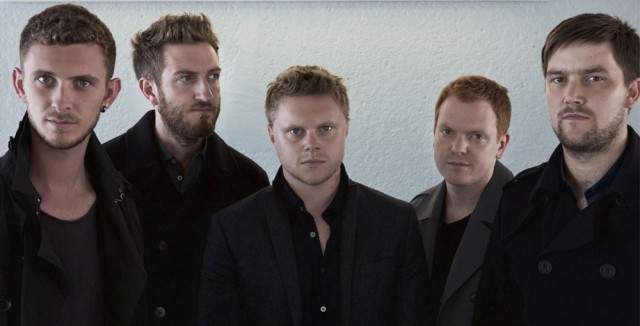 Your self-titled debut album is now out (5th March), how are you guys feeling about that?
It’s been a long time coming, we have never had a busier period in our lives, so it’s pretty manic at the moment and we haven’t really had much time to think about it. Our focus has been on the shows we’ve had coming up and writing for the second record. We’re off to the US in a couple of weeks, so we’re just getting our heads round that as well. But, yeah of course, we’re excited that the album’s out; it will be good to get our hands on it and get some feedback I guess!

And you’re kicking off your March tour in the States and Canada?
Yeah, we’re doing a few dates with The Kooks in North America; then we’re off to the south-west to do a mix of stuff with The Kooks and on our own.

You’re also appearing on MTV in Toronto!?
Yeah! TV performances are always a bit more nail-biting than other gigs, so we’re trying to prepare ourselves for that as well.

Quite a big one, MTV…
Yeah, well these days they just seem to seem to put reality TV on it! Maybe we’ll be in the ad breaks in-between Geordie Shore or something like that, but we’ll see!

So, as you said earlier, you guys have already started making a second album. How is that coming along?
It’s still early days, like I said it’s been such a manic period for us with a lot of travelling and promo; being in and out of Europe to go and do dates in Belgium, Paris, Germany and stuff. But, we feel good about it; we’ve got about 15 songs that we are really excited about. We want to get to about 40/50 songs before we start pinning it down and seeing what it shows up like.

How are they comparing to the tracks on your self-titled release?
I think in terms of harmony and melody it’s going to be a step forward, we’re definitely trying to push ourselves to be more dynamic. Rhythmically, we’re looking at the grooves a lot more and different areas of music but it’s still early days; we’re 15 songs in and we’ve got a lot more to go before we can start making any decisions.

You guys are running a competition with TalentHouse at the moment, where budding film makers can submit their own videos to be the official release for your song, ‘Headlights’ (closes March 12th). How has the reception been?
I haven’t seen the entries yet; it’s all going through the label. It was an idea that was come up with by someone at a German label, where they get band members and young film makers to get directly involved with their own videos. We’ve worked with directors before but fancied trying something new. It’s nice to work with people who are creative and have good ideas.

Obviously you guys have been all over the place touring in Europe and the UK. How have you found the different receptions from place to place?
It does vary massively. I think music fans in the UK are so spoilt for choice, but it’s dominated by one radio station and limited music press so people tend to sit back and expect to be impressed. It’s almost like by living on this little island that musically we have this, ‘God given right’, to be given a chance, which I don’t necessarily think is completely fair but I do absolutely adore going out to Europe and playing shows out there. The appreciation is fantastic and people there have always really warmed to us. We haven’t been to the US yet; but from what I’ve heard through other people and bands that we’ve worked with, is that it’s a fantastic place to go, so I’m looking forward to it!

Have you got any funny, stand-out stories form touring so far?
There have been a few weird ones! We supported 30 Seconds to Mars in Germany last year for a couple of dates, and in one of their production Lorries they had about 100 blow-up dolls; I don’t really know why they had them! I mean, Jared Leto is a good looking guy and a Hollywood film star, rock star, millionaire; so I don’t really know why he’d need sex dolls?! You know, some people are just into that kind of stuff, but, I’m not one to question and we did definitely steal one as a touring present. So yeah, there have been a few things, but not all are suitable to be printed so I’ll keep a few to myself!

Understandable by the sounds of things! We had a whip-round in the office for a random question to ask you guys…
Go on…

If each member of the band was an animal, what would they be and why?
Ben, our keyboard player, would be a giraffe because he has an abnormally long neck! He just looks weird.

(*Shouts at Ben…) Ben! Animals for band members, who would be what?!
Ben: I’d definitely be a giraffe!

Yeah we got that! I think Phil would be a cat, because cats like eating off spoons and Phil likes spoons. Chad would be a sloth! Andy would be an orang-utan because he’s a ginger bear. And I’d be an owl, because obviously I am very wise.

Ben: It’s nothing to do with you being wise!

They’re having a dig at me behind my back, but I love them all dearly so it’s fine.

Wicked. Well thanks Steve for talking to us!
Yeah cheers, sorry if I sound like sh*t I’ve got man flu, but thanks for having me.

No worries, good luck with your tour and everything.
Cheers!