Post-punk quartet The Futureheads have been powering their way onto the scene for the past ten years. Their cover of Kate Bush’s ‘Hounds Of Love’ back in 2004 firmly landed them their rightful slot in the public eye and have since continued in their mission of releasing widely respected and acclaimed records. We caught up with guitarist Ross Millard, who revealed that if it wasn’t for their latest acapella record, ‘Rant’, things for the band could be very different.

Hi Ross, how are you getting on?

Yeah good mate, not too bad at all.

What have the Futureheads been up to the past few weeks?

Well, we’ve been rehearsing a lot as we’ve got quite a lot of festival shows coming up through the summer now. We made an acapella album which we released earlier this year but a lot of the shows we’ve got coming up are electric, so it’s been nice getting back in rehearsals and picking up the guitars and getting on the drum kit again. It’s been a long time since we’ve done that.

How are you finding the transition from electric to playing acapella?

At first, going from the electric stuff to acapella was fine, because we spent a long time making the record. It was a gradual thing, we were sort of finding our way as we went. We had enough time to rehearse it, get it together and make sure we knew what we were doing with it. Going back to playing the electric stuff was a little bit quicker. We had to get back in the rehearsal room and hammer it for a while, at first it felt very weird. It felt like some of the songs we’d been playing for five years were unfamiliar which is a feeling which we’d never really had before.

Was it a planned decision to go down the acapella route, or more of a one off spontaneous thought?

We spoke about it a lot before we actually went in the studio to make a start. I think it initially was more a side project rather than becoming our fifth proper album you know, but that’s what it became because of the work we put into it. Then when we went on tour it felt like it got big quick. It’s given us a new angle for music and a fresh approach, after ten years being in a band, any band, each have their own rules surrounding them with what you can and can’t do; things that sound like your voice and things that don’t sound like your voice or whatever. Doing the acapella thing brought around new rules and changed everything for us. It’s been really refreshing in that respect. 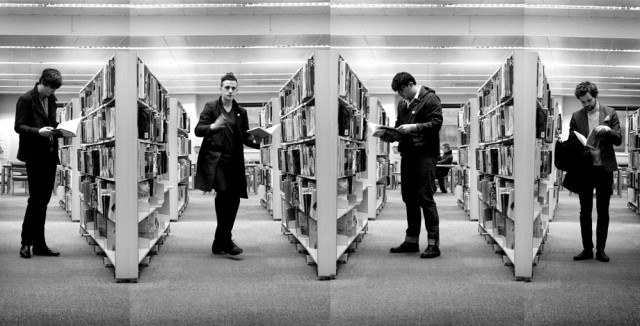 Could you tell us about your new single, ‘Beeswing’?

Yeah, it’s originally written by Richard Thompson, who is for us is like the biggest modern English folk artist that there is really. He’s someone who has spent the last 35, 40 years making really important music that we treasure. He’s made a real contribution to British folk music and he’s cool as well, he’s not a stuffy, fuddy-duddy folk artist in that way; he’s a great guitar player, got a lot about him and his song writing and lyric writing in particular is really, really astonishing. When we were making the acapella album we just thought it was one we had to do. We thought if we were making an acapella album influenced by British folk music we couldn’t leave him out.

Your five albums in now. Do you think your attitudes or motivations with what you are doing as musicians have changed?

Yeah I do. I think it’s something that’s always changing. Your awareness with what your music does and where your music exists changes over the years as well, you know? Fuelled by this acapella thing, I think we have all decided that we still love doing what we’re doing. There was a period after the fourth record, ‘Chaos’, when we were a bit like, “Well, at this point maybe we should have a break for a bit, take a year or two out doing other things”. We didn’t see the point of getting back in the studio and making another guitar album because it wouldn’t have felt fresh, I don’t think we had the hunger for it then. So, instead of taking the time off, we made the acapella record which felt like a project or a study as much as it felt like making a record, you know, it was a real research piece for us and we learnt a lot. It changed our attitudes towards the music we make, so it’s been great for us in that respect; I think we’ve got our hunger and desire back.

In all the years that you have been playing together, can you remember the single most awkward moment you’ve had as a band?

Yeah, I would say it was quite close to the start ,maybe in 2002 or 2003. Barry and Dave are the brothers in the band. They fight and 50% of the time hate each other, but they can’t really do anything without one another. For example, Dave has this side project called ‘Hyde and Beast’ and he still has to ask Barry to come and play keyboards in it; they have that sort of relationship where they hate each other’s company but can’t not be in it! So anyway, we had this gig in Peterborough, in this place called ‘The Met Lounge’, which I think is still there. They’d been fighting all the time, but they’d never fought on stage before, but on this one night, I think Dave played the intro to a song too slow, or wrong, and he was getting the evils from Barry. It just accelerated from there really; he stepped out from behind the drum kit and it was just mortifyingly embarrassing how they then squared up to each other and has this brutal argument on stage! There was probably only about 35, 40 people there at the time but it felt like it was the end of the world! Funny to look back on now though.

Have they chilled out a bit now?!

I suppose they have chilled out a bit with each other but they’re very different people, you know? When you are brothers you can say exactly what you think, you don’t sit on the fence or hideaway or keep anything in. I think it’s for the best really, the fact they have such a volatile relationship is probably quite good for the spirit of the band but sometimes it can be a pain in the arse!

What are you most looking forward to for the remainder of the year then?

Well, we’ve been doing some more recording and working on some new stuff at the minute. Gig-wise,  we’ve got a couple of festivals we’re looking forward to. We’ve got Hop Farm which I think will be quite excellent, the line-up is looking dead good for that. We’re doing Leeds and Reading this year as well which is always a good festival. Anytime you’re involved with that one, it’s a good weekend. We’re doing our own show at Sheppard’s Bush Empire in September so we’re working really hard for that one. All these things are exciting but just playing and being on the road is still where the buzz is and where it all comes from.