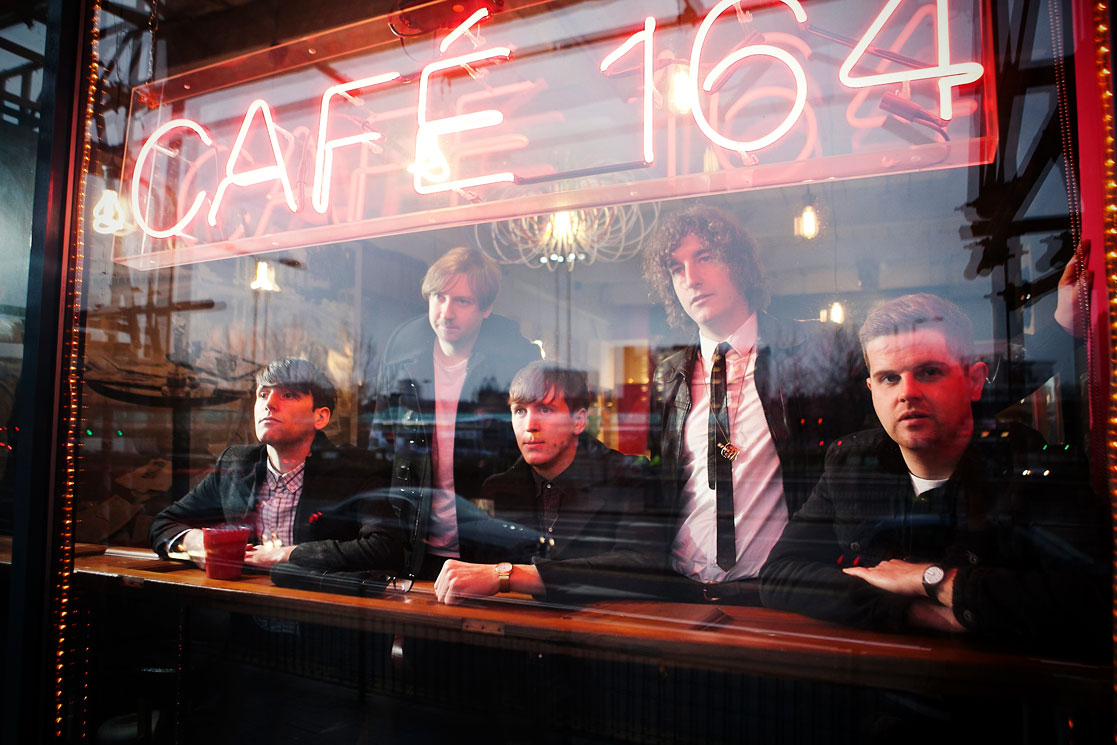 Since forming almost ten years ago, The Pigeon Detectives have made a solid name for themselves as one of the UK’s favourite indie-rock bands. Their debut album stormed the charts back in 2007, taking the number 3 spot in the UK, and since then the band have held a loyal following of fans. Now, however, the band are looking to pay back those loyal to them with their upcoming fourth album, as lead singer Matt Bowman revealed to us when we caught up with him whilst filming the video for new single, ‘I Won’t Come Back’…

How are you, Matt?

I’m very well thanks! What are you up to today?
Today, we’re actually just about to film the second part of our new music video. We filmed the first part yesterday. We’re shooting some live shots from a gig today, so we’ve got like 200, 300 fans coming down and cramming them into a small venue to get some live footage.

I saw that you were filming the video, and you were getting fans involved. Is that throughout or is that just in the gig scene?
Yeah, there’s a short scene at the end, and it’s kind of aimed towards the last thirty seconds of the video being at a live show, so we’re getting fans down today to get some of that footage and just create a bit of atmosphere.

What’s the track called?
The new single is ‘I Won’t Come Back’.

You’ve got your single ‘Animal’ out at the minute, and that was a free download. Why did you decide to do it for free?
Well it’s not free, there’s no such thing as a free meal. Basically, you put in your email address and sign up to our mailing list, that’s why you get the free track. It’s just a way of us giving fans an exclusive taste of the album, and in exchange we sign them up to our mailing list and then we let them know when the album’s out, and things like filming the video today. I suppose it’s a swap of information. We give them a track and they give us their email address.

I’m going to read out a quote from you here. “Animal is one of those songs that we knew would work well in front of a live audience as soon as we started writing it.” Do you normally get a vibe like that when you’re writing a song?
Yeah, not every song you write, but every now and again. Good songs seem to write themselves. You come up with the starting line, and then before you know it you’re into the next verse, and then a chorus will come out of nowhere. You can smell one of those tunes coming. As soon as we started, we were just getting into the early parts of writing ‘Animal’, and we knew it was going to work well live. We were getting good vibes off it in the rehearsal room, and we weren’t just going through the motions playing it. There was quite a gig-type energy in the rehearsal room when we were coming up with that song.

It is a good song! Have you played it live yet?
No, not yet.

An exclusive for the tour then?
Yeah, on the tour we’re going to be dropping four or five, maybe six new songs, and then play some classic Pigeon songs as well.

I was going to mention your tour actually, because you’re out April 25th to May 11th. A decent sized tour, are you looking forward to it?
Yeah, it’s actually April 25th to May 25th; we’ve just tagged on a load of European dates towards the end. So we finish off in Portsmouth, and then we’ve got a couple of days off, and then we’ll be straight on a ferry over to Germany, Norway, Holland, Poland, France. So yeah, a decent sized tour! The Pigeon Detectives, we kind of exist as a live band really. We started off as a live band and I think we’ll probably be remembered as a live band, so it’s good for us to be out on the road where we feel most comfortable.

Are there any shows that you’re particularly looking forward to?
Ummm, it’s been a while since we played Nottingham. I know that sounds like quite a random city for me to pick out as one I’m looking forward to, but I have fond memories of Nottingham, and for some reason on maybe the last three or four tours we seem to have missed it out on the map. All the gigs in Scotland are always good, the crowd up there really appreciate live rock and roll music. London’s a nice intimate one; that sold out within a day of going on sale, so I’m assuming they’re fairly committed Pigeons fans, so I reckon that will kick off with a bang!

What about the European shows? How does it compare when you’re playing over there?
I’m always a big fan of Holland, they speak better English than me! There’s an easy translation over there. You usually have to work a bit harder with the French, but it’s always cool to be there and soak up the French chic. They have a different approach to rock and roll, they more stand there tapping their foot, smoking cigars, compared to the British who just let go and give it their all. 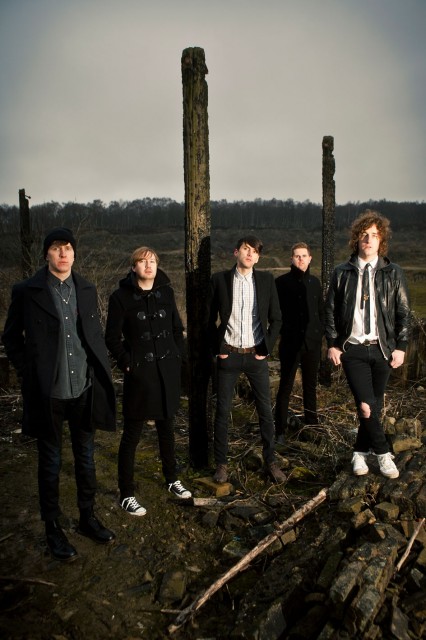 Your album ‘We Met at Sea’ is out April 29th. Are you excited for the new record?
Yeah, I’m looking forward to it! It’s something that’s been in my life for the last eighteen months, or two years. It’s weird, it’s almost like having a secret that you can’t tell anybody. I’m pleased with the tunes, I know that we’ve got some bangers on there, but until it’s out there in the general public it’s almost like our little secret. I’ll be looking forward to it being released, and it adds a whole new dimension to the live set. It’s always a good time in a band when you’ve got new music coming out.

What about the album title ‘We Met at Sea’; where did that come from?
It’s actually a sentence from a lyric in one of the songs. The full lyric is: “You thought it sounded cool to say we met at sea.” We obviously thought that was too long-winded and we just stuck with ‘We Met at Sea’. It’s quite a romantic string of words really. I think it’s open to interpretation, but for me I tried to design the album artwork myself, and I’d be thinking of love-letters from sea or that sailor-esque, adventurer mentality, so it was almost nonsensical when we wrote it but the more we thought about it, it started to have a lot more meaning.

Have you ever met anyone at sea yourself?
I’ve been on the odd ferry! There’s always fellow passengers on there so I’ve met the odd person.

You’ve also got something on your website where people who pre-order the album can get their name in the artwork. Where did that idea come from?
It was the bands idea. I’m not against the internet and I’m not against Spotify, and I have a huge iTunes account myself, I’m always downloading stuff, but it does feel like music’s become a bit of a commodity; it’s not something you collect or own anymore. I think that kids have been slightly robbed of that feeling of going into town on the bus and spending all your pocket money on a CD and having it in the rapper, then looking forward to getting back home and banging it in the CD player and having it on repeat all day. I think with things like Spotify and iTunes, you very rarely listen to an album from top to bottom; you skip between songs and between artists, and you certainly don’t have the CD and the booklet to flick through. So we just wanted to create something that would be a bit of a keepsake for fans; something you can actually hold in your hands and look after and treasure and want to go back and revisit. We thought it was an opportunity for fans to be part of the album and get some of that excitement back to buying music and owning music.

So, it’s all about the physical album for you.
That particular idea was. If we sell three and a half million on downloads only, I won’t be offended by that, but for hardcore Pigeon Detective fans who will go out and buy 3,500 CDs in the first week, I think it was important to give them something a little bit special and something they can keep.

Does the new album differ from the last album, ‘Up, Guards and at ‘Em’?
I think it was written with a different mentality. We’d been touring ‘Up, Guards and at ‘Em’ for eighteen months, and we came straight off the road and straight to the rehearsal rooms. So we still had that live band energy and we were still a really sharp rock and roll outfit when we came to write the latest record. A lot of them have been strummed out of acoustic guitars and written and then we’d bring it to a rehearsal room, and it was just full on, amps plugged in, drums, thrashing out tunes. I think it benefits from that, and the album’s exciting, it’s meant to be played loud, it’s meant to be in front of a live audience. I think it has a lot more of a punk element than the last record. The last record was a lot more polished and very much worked on in the studio. This album there was a lot more of: ‘if you want a guitar solo, you’ve got to play the guitar solo’. We didn’t use any kind of technology and clever edits or anything like that, so it’s a really honest record. What you hear is what was actually played.

I wanted to ask about your recent Rihanna cover as well. Where did that come from?
We were all excited about releasing the album and getting it out there, but we kind of had this two month lull where you’re not really doing anything. It’s not quite as stimulating as making music. So we just decided to do a bit of a leftfield cover. I think we’ve got plenty more to do. We’re going to do an acoustic version of Animal, there’s an Elvis Costello song we want to do, this Bruno Mars song we want to do. I think we’re going to try and release maybe two or three more before the album comes out, just to keep the fans interested, and keep on people’s radar.

What about festivals this year? Are you down for quite a few?
Yeah, there’s plenty of festivals that we’re playing this year. I’m not sure which ones I can say, because the festivals usually like to announce it themselves, and I know we’ve not been officially announced for any. We’re playing one that starts with a huge capital letter and ends in ‘Festival’. And then there’s one in Scotland and Ireland. I can’t really be cryptic about any of them, but yeah, there’s plenty of festivals we’re playing the summer.

Which festivals are you looking forward to the most?
Anywhere the sun’s out really. One of my favourite parts about being in a band is doing the festival season. Getting the chance to see bands, and looking down a list and thinking ‘I can go to The White Stripes and then catch the Arctic Monkeys’, and it’s all for free, I’m being paid to do it, I’ve got backstage access, I’ve got unlimited cider, and the sun’s out. I’m a big fan of all festivals really.