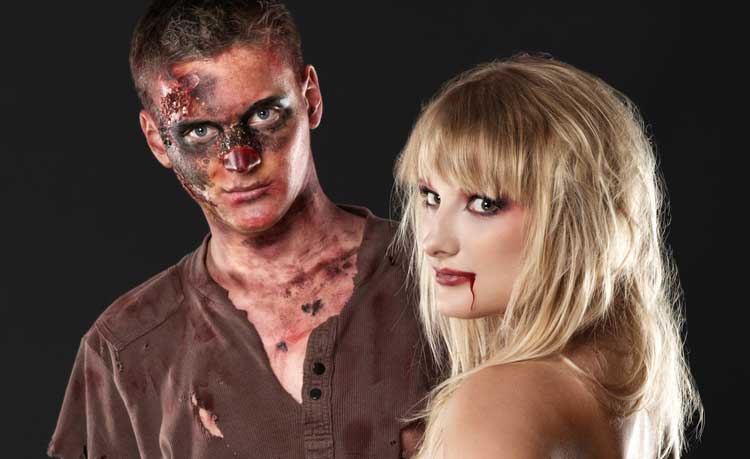 It’s okay to love zombies and still think that vampires are stupid. Given the projects that have featured vampires throughout the last decade, it’s not surprising that anyone would hold some animosity towards the figure that was once the embodiment of devilish behavior and sinister desire. Only a shadow of what it once was, today’s vampire is represented as a vegetarian high-school kid that glistens in the sun. At least they’re still creepy…

In the last 10 years, the majority of movies about vampires have been aimed at teens and tweens. Many are cast with a slew of pretty boys, and innocent, helpless girls that pine over them. The Twilight franchise being one of the most noteworthy, along with the Vampire Academy series, and Warner Bros.’ supernatural drama, The Vampire Diaries.

On the other hand, zombie franchises like AMC’s The Walking Dead, target demographic is adult males and females, ages 18-49. While the post-apocalyptic show still has some attractive characters, the zombies are not. In fact, they’re disgusting. Nothing about the zombie image has changed from the classic representation, allowing them to stay creepy and downright scary to the audience. They’re still seen terrorising people and devouring their victims in all of their gory glory.

There is also the romanticised story lines of popular vampire movies that might appeal to adolescent girls, but adults tend to find melodramatic. In The Twilight Saga: Breaking Dawn – Part 1 Bella and Edward consummated their whirlwind relationship in a romantic honeymoon suite off the coast of a luxurious island. Maggie and Glen on The Walking Dead however, consummated theirs in an abandoned drug store surrounded by walkers. And given their lack of a clean water supply, it had undoubtedly been a while since either of them showered.

Studios have also been able to gain zombie fans by seamlessly integrating the undead into comedies, such as 2009 film Zombieland, 2013’s Warm Bodies, and cult-classic Shaun Of The Dead that PictureBox appropriately describes as, “A rom-com with killer zombies. Only Nick Frost and Simon Pegg could get away with it” in their write-up. Some projects have tried to do the same with vampires, but have unfortunately failed miserably. The few vampire comedy films like Vampires Suck, Transylmania, and Lesbian Vampire Killers, have been box-office bombs with horrible reviews.

So if you’re biased against vampires, don’t feel bad. It’s not your fault that Hollywood has chosen to turn an iconic horror figure into a glittery high-school drama queen. Maybe one day they’ll be able to revamp the vampire’s image back to its haunting glory, but until then, I’ll stick to wonderfully decaying, flesh-eating corpses.