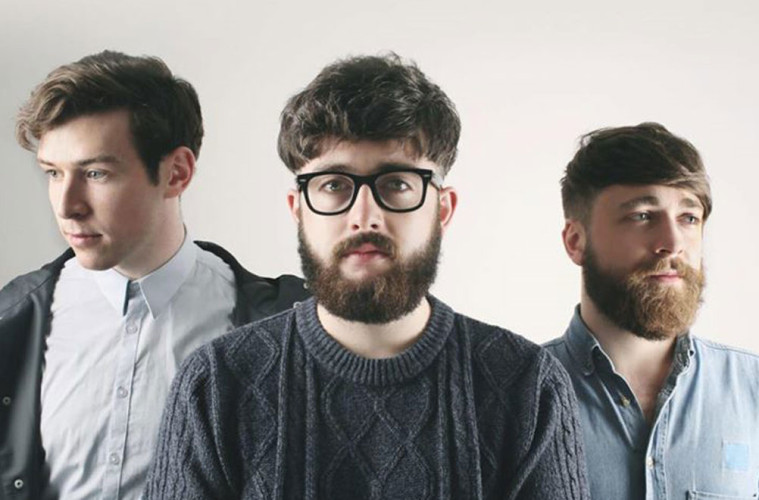 Glaswegian band Fatherson have toured with the likes of Enter Shikari, Twin Atlantic and Prides, and have just finished up a headline tour around the UK. I caught up with them before their gig at Brudenell Social Club, Leeds for a chat about their new album, toasties and McFly.

Your new album, Open Book is out in June. What can people expect from the new sound?

Marc: There are some songs that sound nothing like anything on the first album [I Am An Island], but I think it’s maybe like in a cliché way, we’ve matured and we’ve got better at getting songs together.

Ross: It’s quieter, not ballad songs but slower and just differently thought out. It’s quite fragile.

Has your writing process changed during the time between I Am An Island and Open Book?

M: We’ve just had a lot less time. You’ve got your whole life to write your first album and then we kinda had a really fun, but intense few months really. There were a bunch of songs that were already there. We went down to Kilmarnock into Ross’ old bedroom and we just spent a couple of weeks getting them together and then recorded them really quickly after that.

R: I think it definitely sounds like an album that was written all at the same time rather than a collection of tunes written over a year or so. Which is cool. It’s nice to know you can go and blast it for a couple of weeks and hopefully come out with stuff that people like.

Are all the songs on Open Book new?

R: There’s one song we’ve been working around and playing live and the other eleven are totally new and never been heard by anyone apart from us. And there’s only maybe 4 of the songs from the record that have seen the light of day, which is cool…and a bit scary.

How many of the new songs have made it to the setlists?

M: 4. There’s the 2 new singles, ‘Always‘ and ‘Lost Little Boys‘. The song ‘Forest’ has been knocking about for a while, we’ve been playing that live for maybe a year and a half. And we’re playing ‘Just Past The Point Of Breaking’ which is the first song on the new album.

How are people reacting to the new singles?

R: It’s always strange, especially when you’ve already released an album; people will come see you because they wanna hear the songs they know. If you go see a band under a new album cycle and they sort of play sixty percent new and forty percent old tunes ya know people are like “this is rubbish” so we’re trying to keep them to a minimum. But it’s really nice that people are stopping and listening to it.

This is your first headline tour in the UK for a while, how has it been coming back?

Is there anywhere that you’d like to play that you haven’t as of yet?

M: L.A would be really nice.

R: India? I don’t think India gets many Scottish rock bands over there. But in the UK, I really would like to headline the Deaf Institute in Manchester; it’s a really cool venue.

G: I mean, Wembley would be really nice to play.

R: Yeah, maybe next time. We’ll put the buses on for everyone.

G: Bus everyone to Wembley. It’ll be great.

Do you have any pre-gig rituals that you have to do before shows?

G: Yeah, about an hour and a half before we’ll have a toastie, you don’t wanna be sluggish on stage.

M: We’ve tried a couple of times putting songs on to get us pumped up, but this tour, not really that much; just have a couple of gins.

R: I actually really enjoy having a shower before we go on. Had a shower at the venue last night, it really set me up. Felt like I was getting up for my work.

If you are to listen to songs to get you pumped, what do you play?

M: I think it was McFly for a little while.

G: For WAY too long Mcfly’s ‘Stargirl’ was the go to.

M: Was good though.

G: But we’ve been listening to The Sound by The 1975. I always have a wee dance to that before we go on stage.

R: We made a playlist for like, the half hour before we go on so we can hear that from the dressing room. No McFly. That’s private. McFly are private.

Anything this year you’re particularly looking forward to other than the album release?

G: We’re gonna have quite a few more songs coming off the album. Loads more shows and festivals. It’s looking like it’s going to be a really busy year.