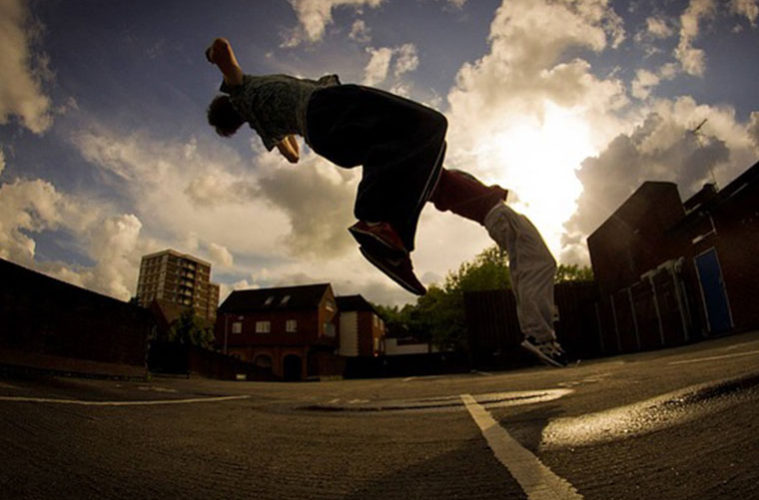 In January of this year, Parkour and Free runners were thrilled to find out that Parkour had officially been announced as a recognisable Sport in the UK by Sport England. The UK is the first to recognise Parkour. Parkour and Free runners have had their fair share of bashing and judging by others on social media, as well as in the media with labels such as ‘daredevils’ and ‘mad men’ that ‘jump over buildings’ However, they now have high hopes for the future, hoping the recognition will have people take them a little more seriously.

Parkour was founded, pioneered and developed across the 1980’s and 90’s in France by Frenchman Sebastien Foucan. It was started when he was a young boy in Lisses, France, with a group of friends when the developed an obstacle style of play and named it ‘parcour’ after the military training ‘parcour du combatant’, translating in English to ‘obstacle course’. Parkour takes similar strength and training to other existing sports that are widely popular across the globe such as gymnastics that we see often in professional competitions such as the Olympics.

But Parkour’s response seemed to take a different path. Parkour and Free runners say the beauty of Parkour is being able to have the world as your playground, a personal and creative Sport that allows the individual to create new pathways and to get from A to B using urban objects such as walls or railings to get across as smoothly and quickly as possible, including tricks along the way. But this hasn’t been as widely accepted as other sports such as football and hockey has. But why is this? Free Runner and YouTube Parkour film maker Giles Longley said; ‘: It depends what you’re up to… [It’s] mainly just because it’s something they’re not used to. Like, people are very objected to, to new things’.  It’s argued that the danger and use of public spaces and the majority of Free runners being male are the most popular reasons for Parkour’s controversy.

The news that Nye Frankie Newman, the 17 year old British teenager who died after being hit by a train in France sparked fear amongst the public and media, just days before Parkour was announced a recognised UK sport. It is still being investigated whether Nye was train-surfing at the time. This has sparked fear that others will put themselves in danger. However, 22 year old Parkour and Free Runner Joseph Green from Doncaster commented; ‘This is not what Parkour and free runners do. We train for a long time, we do things we are only comfortable in doing, if it’s risky, we’ll do it indoors. So many people go out jumping on rooves and trespassing and they get categorised as Free runners and make us all out to be crazy idiots.’

It hasn’t been easy for Parkour to be recognised, with the process of application taking up to two years. One issue in particular that stood out was competition, a difficult process as Parkour is known to steer away from the competitive direction. However, with competitions and Parkour events such as ‘For the love of movement’, a summer and winter three day festival with competitions and prizes and other events all over the world such as France, US and Amsterdam, Parkour UK managed to show that there is an element of competition within Parkour.

So what will this recognition of Parkour have in the future? Paul Smith, Director of Sports at Sport England said; ‘n theory what they will get is improved governance, in the governing body, you know, better decision making, potentially, potentially access to funding’.

‘In Layman’s terms, this recognition means that they’ll be taken a bit more seriously’.